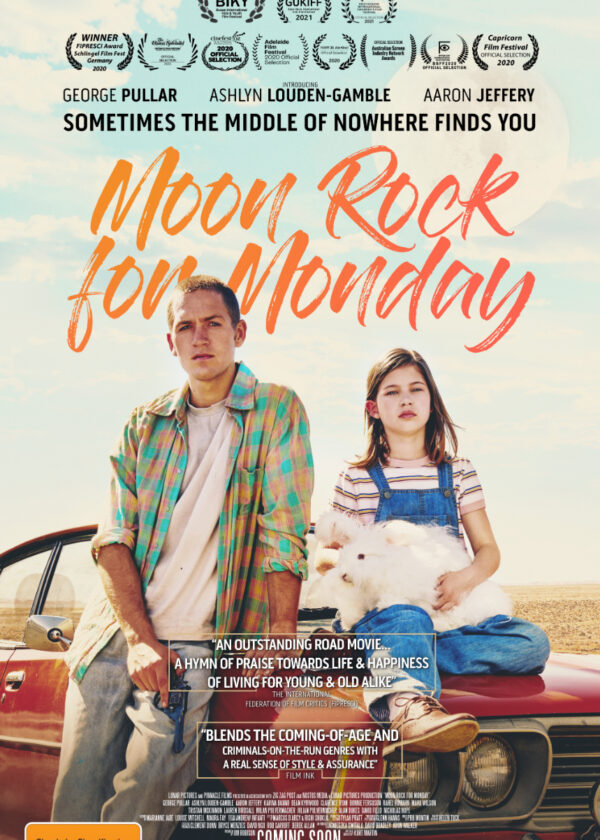 Set in Sydney, 1999, after an unlikely encounter at a train station, a young girl befriends a fugitive teenage boy and they travel to visit a moon rock that the girl believes will heal her.

This imaginative story, based in Sydney, Australia, deals with a 10-year old girl named Monday, and an adventure she embarks on. Her dad, Bob, named her Monday as that was the day she was born on.  Monday is home schooled, because she is battling an immunity sickness, and her real excitement is in having a pet rabbit. When her rabbit dies, her dad promises to get her a replacement.

He follows through on his promise and he wants to name the rabbit “Rabbit Two.” “You’re not very inventive,” Monday tells her father. While her father teaches her, we see a teen boy outside, a distance away, practicing aiming a gun, a portend of things to come. We also see Monday, feeling ill, go into the bathroom and vomit, although it is  not graphic.

Monday believes that moon rock can heal her, and she wants to go to such a place, so named, in Australia. She believes holding the rocks will heal her. The actual place is known as Uluru, and Monday declares she wants to go on “an excursion.”  Her dad’s affection is shown when he laces up her untied shoes. They are cute together, for example her dad tells her the trip is 3,000 km away, and she tells him, “It’s actually 2,908!”

A short time later, Bob and Monday have picked up the new pet rabbit, and then we see a teen robber with a gun holding up a business and telling people, “Everyone on the ground!” He then races to the local train to board it. Monday is sitting near-by, and her father is a distance away. She notices her rabbit has escaped its cage, and she pursues it to the train. When she boards the train the rabbit is near the robber, and he smiles at her and grabs it for her. Monday becomes acquainted with the man, who is named Tyler.

This film focuses on characters and little special moments, and it is an endearing film. Tyler and Monday hit it off, and she stays on the train, no doubt enjoying being on an “adventure” for a change. The story develops into their ensuing bond and relationship. They cut up together, joke, and travel together. And Tyler takes it on himself to look out for her. In the meantime, Bob is desperately trying to find her with the help of a local police detective.

Tyler introduces Monday to a homeless man named Moose, and it was to get money for Moose and his medical needs which is why Tyler robbed the business. She introduces Moose to “Rabbit Two” but Tyler insists on calling the rabbit “Bacon”! In one scene, Moose is seen “sniffing paint” for the high it will give him. Tyler becomes more of a sympathetic character when in a flashback he remembers his mom, with blood on her face, having been in a car accident. The upside-down car from the accident is seen as well. Tyler was a young boy, and he is seen near her side. We learn that she died.

Tyler and Monday are acting as if they are brother and sister to the people they come in contact with. As they push toward Alice Springs, and Uluru, they do encounter a few people who help them in their journey, giving them rides, etc.  And Monday gets on Tyler when he uses some strong language, telling him not to swear. In a funny moment, Tyler says he will say “cauliflower burrito!” when he’s tempted to swear. The two of them have fun with this as Monday comes up with “rumplefish marmelade!” for her angry words.

In a touching scene, Monday tells Tyler her mother died on a Monday, and he tells her she is in heaven now. “Dad doesn’t believe in heaven,” says Monday. “Well, it’s still there,” replies Tyler. He also teases her, telling her she made noises in her sleep and it was flatulence and “stinky!”

At one point Tyler robs a pharmacy to get medicine for Monday, and he flirts with the female pharmacist who likes him! He makes sure Monday takes her medicine.

We won’t spoil the ending but the movie does tie it all together at the end. George Pullar is excellent as Tyler, as is Ashlyn Louden-Gamble as Monday, and Aaron Jeffery as Bob.

The film has earned our Dove seal for Ages 18+, as there is a man seen with a baggie of marijuana, and a character appears to be high. There are also a few uses of strong language, but none include the Lord’s name in vain. The story itself shows how that two strangers can connect, and how that there is two sides in people, the bad but also the good.

This movie interestingly shows that sometimes the unlikeliest of people can become friends, and change each other’s lives.

A man mentions heaven is real.

A man looks out for a young girl; people help a traveling pair, giving them a ride; a man faithfully searches for his missing daughter.

A man shoots an officer who dies during a robbery, but this is mentioned and not seen; a man is shot and dies but it is not graphic; a man robs a car and a van; a man punches another man; a man robs a pharmacy.

A man appears to be high; a bag of marijuana is seen; a man sniffs paint to get a high from it; a man mentions his “ciggies”.

Tension between characters and a few threats.