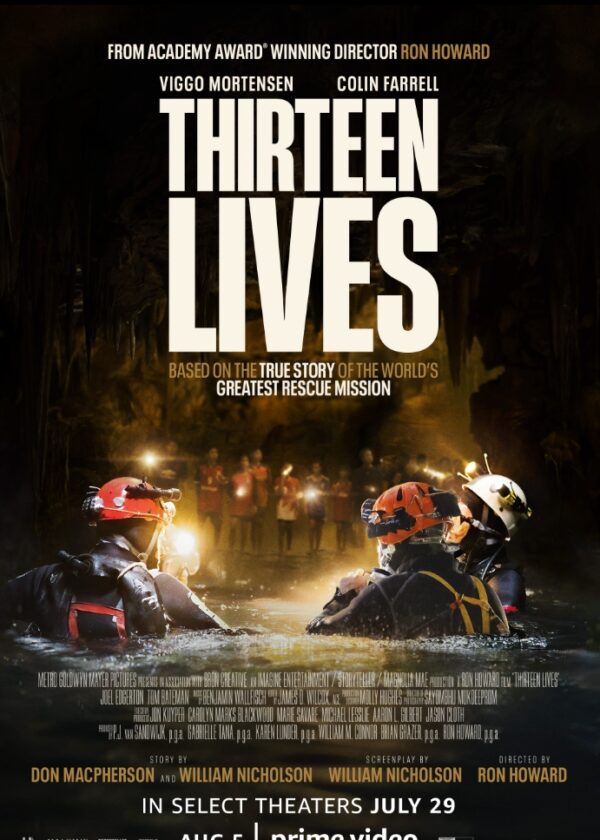 A rescue mission is assembled in Thailand where a group of young boys and their soccer coach are trapped in a system of underground caves that are flooding.

A tragedy brings the world together in the inspirational true story Thirteen Lives, directed by Ron Howard and releasing on Amazon Prime Video on August 5. A young boys’ soccer team in Thailand ventures into the cave system beneath Doi Nang Non (“Mountain of the Sleeping Lady”), that is soon overtaken with flooded water, sealing them off from the outside world. As the hours pass and the situation grows more urgent, the community and world come together to support, pray, and devise strategies to rescue the team.

The drama is intense, as Howard chooses a more gritty, realistic outlook for the cinematography, with several harrowing underwater sequences. A volunteer group of divers come to offer their help in locating the boys, and when they are found, they are then perplexed at how to retrieve them through the grueling five-hour swim back. Meanwhile, above ground forces unite—at some times more than 10,000 people—to offer help, some at great personal cost. Buddhist monks lead prayers and rally the faithful.

Buddhism represents the tangible spirituality of the film, although mostly in prayers and the visibility of the monks. At one point, PureFlix had the rights to the story with their own film plans and would have more focused on Adul, the English-speaking soccer team member who has shared his Christian testimony. Still, the themes that are present in the film, those of responsibility, self-sacrifice, and love, would certainly appeal to those of all faiths.

Real-life heroes, Rick Stanton and John Volanthen, who flew in from the UK to join the effort, are the film’s two main characters. Portrayed by Viggo Mortenson and Colin Farrell, the men are uncomplicated heroes, focused solely on their mission to save lives by any means necessary. Their backstories are not important; this story focuses on their present capabilities. The governor, under the gun by officials to do the honorable thing, is another selfless admirable character, declaring “If we fail, the failure is mine alone.” It’s refreshing to see a positive example of a politician with a “the buck stops here” attitude in the proverbial line of fire.

For families, profanity in the film is in the PG-13 range, not very frequent but still present and noticeable. The only additional caution would be for unsettling images during rescue attempts.

“Thirteen Lives” is a film that celebrates love and unity that transcends cultures, backgrounds, ages, and even faiths. With the world seemingly more divided than ever before, a good reminder of how we can come together under the right circumstances can bring a welcome ray of hope.

Self-sacrifice, integrity, and hope are central themes in the film, both in heroes and in the trapped soccer team members.

Many characters are admirable and there is no true villain of the film, only the challenges of nature.

Mostly PG, with half a dozen uses of the “s” word and one possible, muddled use of “F.”