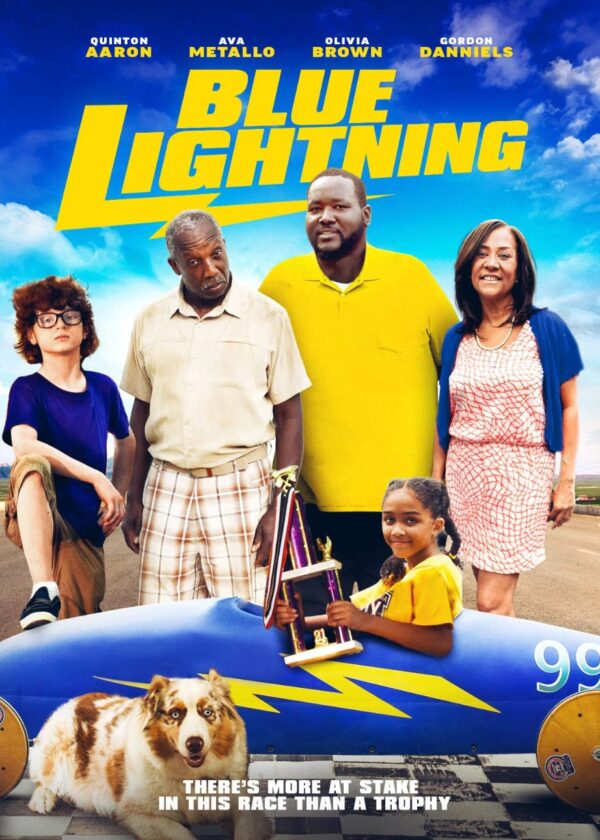 A grumpy, old man’s life turns upside down when he discovers a mischievous orphan is his granddaughter — until they bond over soap box derby racing.

Here is a wholesome and uplifting family movie that the entire family can enjoy together. The movie opens with the narration being about Lyons, Ga., and the Derby Hills Soapbox Derby in Southeast Georgia. The Gordy family has won several years in a row, but that was until “one summer when everything was about to change.”

Ben Cummings (Gordon Danniels) has been part of the derby for many years, including back in the day when his son, Jackson, would always finish second or third, just missing out on the championship. Now, sadly, Ben is a widower, having recently lost his wife Myrtle, and he also lost his only son, Jackson, some years before in an auto accident. And now the grumpy man is about to get a surprise.

Enter Olivia (Ava Metallo). She has been living in a foster home for a time but she does have a good friend in Harper (Brisco De Poalo),  a red headed boy who has become like family to her.

Surprisingly, Olivia is Ben’s granddaughter, although they have no idea that the other one exists. But Miss Lane (Pamela Rose Rodriguez), a social services worker, visits Ben to tell him of his granddaughter. He has ignored the letters that have been sent to him, not even bothering to open them to see what they were about.

Ben is told that his son and daughter-in-law did indeed have a daughter-his granddaughter-and they have been trying to locate the next of kin. “And well, sir,” says Miss Lane, “that’s you. She’s 12 years old.” What’s ironic is that just before this Ben had to stop a young girl and her red-headed friend from playing in an airplane hanger, and almost killing them both and Ben too, after they got the airplane started. It turns out the girl is his granddaughter!

When Harper learns of Olivia’s departure, he is heartbroken, as is she, but they promise to keep in touch. Olivia meets her grandfather and he remembers her as the girl in the airplane hangar. “You tried to kill me!” he says. His crankiness meets her direct approach, and like chemicals that don’t mix it doesn’t start off very well. However, these two are cut out of the same cloth and they eventually, slowly, begin to form a bond.

Olivia’s spunk is on display when a bigger girl attempts to bully her. The girl winds up with a plate of food on her head! And, at home, when Olivia learns of the soap box car and derby, she becomes instantly fascinated, and asks her grandpa questions about it. “You know you ask a lot of questions!” he fires at her.

Olivia begins to adjust to her new life and even winds up feeding a horse, which she loves. Olivia and Grandpa Ben finally talk about her father, Ben’s son, and Olivia can’t believe that they didn’t talk to one another for so long. She asks him why he didn’t at least send a card? Some of the humorous scenes include one in which they are both annoyed at one another, and they each growl, “mmmm!” at each other. And they fight over a blanket they each like. Another comedic moment occurs when Olivia starts up the tractor and accidentally heads toward Grandpa Ben! He winds up being caught up in the front “shovel” blade of the tractor! It’s funny for sure.

One of the other humorous moments, which would probably (hopefully) never happen, is when he tries to ship Olivia back to the orphanage in a box! He tells the shipping person that, “I have to get to my bingo game!” It is obviously played for laughs and, at one point, when Olivia’s voice is heard from inside the box, Grandpa tells the shipping clerk it is a “talking doll!” inside.

But between Olivia, and a single woman named Mattie (Olivia Brown), Grandpa begins to slowly ease up on his crotchety nature. He even tells Mattie that his Myrtle “liked you.”

It should be noted that Quinton Aaron (Michael Oher from The Blind Side) is in the film, playing the likable Chef Adam, and he becomes a friend to Olivia. Another plot involves Harper’s dad coming back into his life, but it is learned he simply wants to get a key from Harper, that opens a locked box Harper’s mother had kept, with something valuable inside. He has no interest in being involved in his son’s life.

As the film heads toward the conclusion, Grandpa Ben trains Olivia to race with the Blue Lightning, the soap box derby car that has been in the family for years, the same one Olivia’s father had raced in. Will she win the big race against Nick Gordy, her brash opponent? And will she wind up staying with Grandpa Ben? Without plot spoiling we will share that another surprise happens at the end which we believe audiences will love. The touching moments in this film includes Grandpa Ben wishing Olivia a good night, and then looking at a picture of Myrtle, his deceased wife, and saying, “Good-night my Myrtle.”

This inspiring movie is about the importance of family, and it has earned our Dove seal for All Ages.

With memorable characters, this inspiring film shows that family bonds, although lengthened at times, are never truly broken.

A man helps his granddaughter, whom he did not previously know; friends have a falling out but then forgive one another; a social worker attempts to place kids with families.

A man kisses a woman on the cheek.

OMG-1; Oh My Lord-1; Imbecile-1; there was one word which was hard to hear, which could possibly have been a “da*n”, but given no other language is used, it is more than likely a different muffled word.

A girl accidentally scoops her grandfather up in a tractor blade but he is fine; a girl pours a plate of food on a bully’s head.

Tension between a few characters; grief; a father comes to his son in a foster home, only to get something from him.