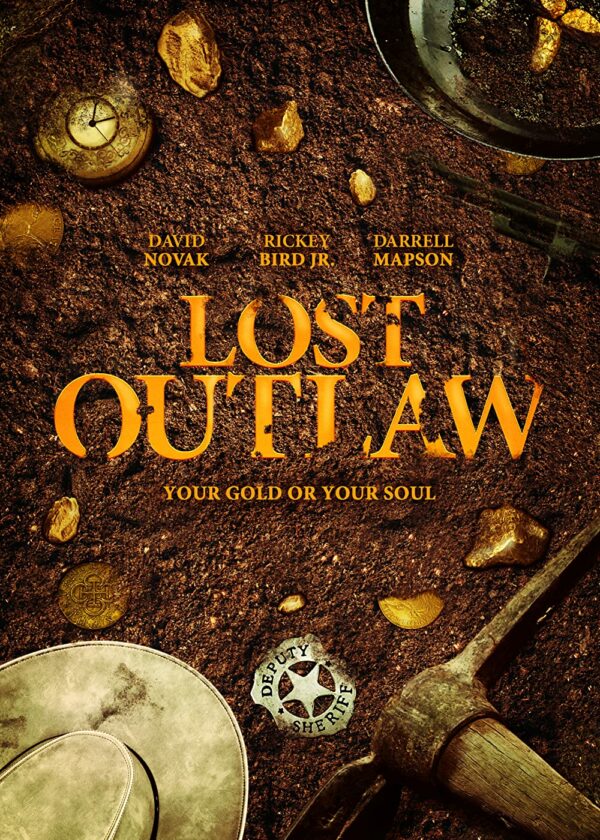 Set during the Gold Rush, a gold mine is taken from Chinese miners and ultimately used as a hide out by the Red Jack Gang, an outlaw gang on the run. Alliances are questioned when Lucas, a member of the gang, meets a young Christian woman on the road and is forced to choose between the lifestyle he has become accustomed and the woman of his dreams.  However, will the Red Jack Gang decide for Lucas before he gets a chance, or will this Lost Outlaw take his future into his own hands?

This film harkens back to the classic Westerns of the past and is lovingly dedicated to the writer/director’s father. Darrell Mapson has dedicated the film to the memory of his father, Rev. D.H. Mapson, who passed away in 2019, and who served in the ministry for 50 years. He always said that with God’s help anything was possible, and the completion of this film is proof of that.

The film opens with tension, as a gang of outlaws led by a rough sort, Jack, who is assisted by Quinn, Red and Lucas, and Alfonso, rob a train. Afterward, when Alfonso insists on being paid his cut immediately, the tension mounts until he is told to wait, and he finally agrees. However, the next morning he is missing, and so is the money. But is everything as it appears to be? And when his body is found not long afterwards lying face down in a creek, it becomes obvious that someone else holds the stakes.

Along this film’s journey we meet a widow named Kate (very well played by Lisa Rentuor), and her daughters, Sarah (Heather Marie Peterson) and Sadie (Shannon Sinclear). In fact, some of the best acting in the film is done by these three ladies. Kate is a church-going and God-fearing woman, who owns a lot of property, which stretches as far as a river where some Chinese workers have been mining for gold. Jack’s gang comes along and robs the Chinese workers, and they force them to leave. The gang takes over the mining operation, and they use two men named Ennis and Sal as their stooges, and these two men wind up offering some comedy relief.

As the plot thickens, Lucas shows regret for his shady past, especially after meeting Sarah and attending church with her. One of the nice things about this movie is it shows that anyone can change. The Pastor gives a sermon about Job’s trials and how that God brought him through. In a funny scene, it’s later stated by Lucas that the pastor’s sermon was short but effective. Sarah tells Lucas that the pastor’s sermon was short because of the church picnic, and the food was waiting!  Mom Kate offers up prayers as does retired sheriff Jim Tucker (Jim Tuck) who shows up to pray and eat with the family.

A bounty hunter named Tate and the current sheriff join forces to track down the gang. However, while Mom is away, two of the ruffians go to her home and find Sadie alone. They have learned that Kate owns the property near the river, and they are determined to wait for her to return home, to force her to turn the deed over to them. They force her to play a hand of poker, with one of the crooks playing her hand, so as to win the deed. In a moment of comic relief, Ennis admits to Sal he has a gold tooth, and Sal warns him to keep that knowledge to himself! He doesn’t want the crooks trying to get that gold out of his friend’s mouth. The use of music is well done in the film, including the song Lost Outlaw at the end as the credits roll. The song speaks of God’s love and not riding alone.

In another comedic moment, Ennis tells Lucas, “Sal says sometimes I need to get to the point, and I just don’t.” “I know what he means,” replies Lucas. But there are also scenes of danger, such as when the crooks take Kate to the church to complete their evil plans.  In the meantime, Lucas and Sarah obviously have feelings for one another, and Lucas feels moved by what he learns about God and the Bible. Will he truly change and possibly be available to help Kate and her daughters, to protect them from the rest of the gang?

Some gun fights are shown, as well as threats by the gang, but the Bible is promoted and God’s love as well, and so is praying in the movie, which was awesome to see. The movie’s violent scenes are fairly tame, and the film has procured our Dove seal for Ages 12+.

This Western incorporates the idea of God’s love and divine protection and families with kids 12 and above will enjoy it.

A sermon on the book of Job; church scenes and prayers offered up by pastor and others over the meal; the idea of God changing one’s life is promoted.

A woman talks to an outlaw, encouraging him to turn his life around; a retired sheriff helps out a widow and her daughters; an outlaw changes his ways.

A couple kisses; saloon girls are told to be “real friendly” to the customers and one of them talks to a customer about him giving her money to show him a good time.

Some moments of shooting without blood or graphic scenes; woman is gagged but is all right; a man’s body is seen lying dead in a creek.

Alcohol, including beer and whiskey, is consumed in several scenes, and drinking is mentioned and seen in the saloon.

Various characters are threatened by a gang and forced to listen to them; tension between characters.