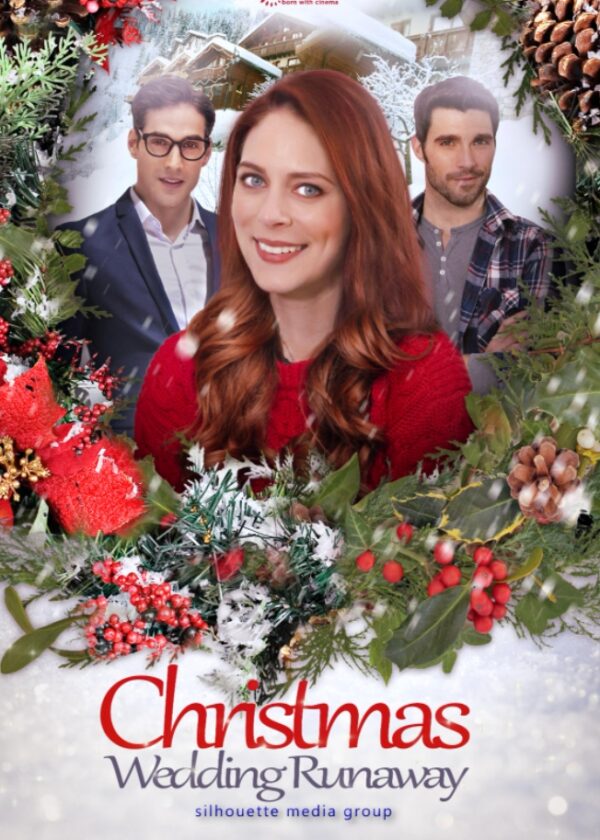 A runaway bride does some soul-searching when she’s trapped in a snowed-in cabin with her grandmother and an old flame at Christmas.

Christmas Wedding Runaway will remind the viewer of a Hallmark Channel movie — it’s a pretty tame film as far as the content, and it has a romantic flavor running throughout the movie. And, unlike the Julia Roberts movie, Runaway Bride, the leading lady, Maggie Colby (Sara Mitich), only leaves one groom waiting at the altar.

Although fairly predictable, the film is worth watching due to the performances of the actors, and the beautiful scenery which includes snow-capped hills and white covered trees.

In the beginning of the story, Maggie is supposed to meet Douglas (Joseph Cannata) at the altar, but she doesn’t. Douglas had even shown up before the wedding to give Maggie a few notes on remembering to acknowledge a man named Corben as she walks down the aisle! He tells her there is no such thing as bad luck from seeing the bride before the ceremony. Maggie is kind but not impressed with Douglas’ attention to details.

She decides to run for it and drives upward to the hills, and a small mountain, where her Nana (Mimi Kuzyk) lives. She stops at a convenience store first, only to spot her ex-flame, Colt (Harmon Walsh). She attempts to hide from him, but he sees her when she finally steps outside to leave.

Unlike Maggie, her parents and her sister, Olivia (Candice Mausner), really think she belongs with Douglas and can’t understand Maggie’s disappearing act. However, Maggie’s wise grandmother, Nana, reminds Maggie that there needs to be some “sizzle” in a relationship or it won’t work. Nana calls Colt to come fix a leak in the kitchen (that really doesn’t exist), and it’s apparent when he arrives that he and Maggie still have feelings for one another. He is an art dealer, and she has had success as a writer. Maggie previously had left the mountain to work on her writing, but she soon learns that Colt has had success in his art business. She is a bit miffed at him that he didn’t ask for her help before she left. There is a nice scene in which they sit side by side as Maggie plays the piano and they sing, Silent Night. Nana adds humor to the movie as she asks Maggie to help her bake cookies, and when Maggie replies, “Yes, Ma’am,” Nana says, “My two favorite words!”

Meanwhile, Olivia is busy telling Douglas she knows Maggie loves him, but it becomes obvious that it is actually Olivia who has fallen for Douglas. Everything will come to a head when Olivia tells Douglas where Maggie has escaped to, and they both drive to Nana’s mountain home. Douglas and Colt soon meet, and it is a bit uncomfortable for them, as Douglas learns that Colt is Maggie’s ex.  They even exchange a few shoves outside when they step out into the night air to grab some firewood.

Nana is the one who pulls them all together. She is the “voice of reason” and has them be honest with one another. We won’t spoil the ending, but we will say there is a double wedding that takes place at the conclusion of the movie.

This one is slanted for a bit more mature audience, as it involves romantic stories and a bit of kissing. It has procured our Dove seal for Ages 12+.

Featuring romance, a bit of comedy, and scenic moments, this movie offers an entanglement that ends well for the audience.

The song “Silent Night” is sung.

A woman goes by her heart other than what others expect her to do; a grandmother puts up some guests for the night during a bad winter storm.

Two couples each kiss; a grandmother warns two couples who are staying overnight due to a blizzard, “No shenanigans, the floor creaks!”

Two men shove each other but it doesn’t last long and neither man is hurt.

Wine and champagne are mentioned.