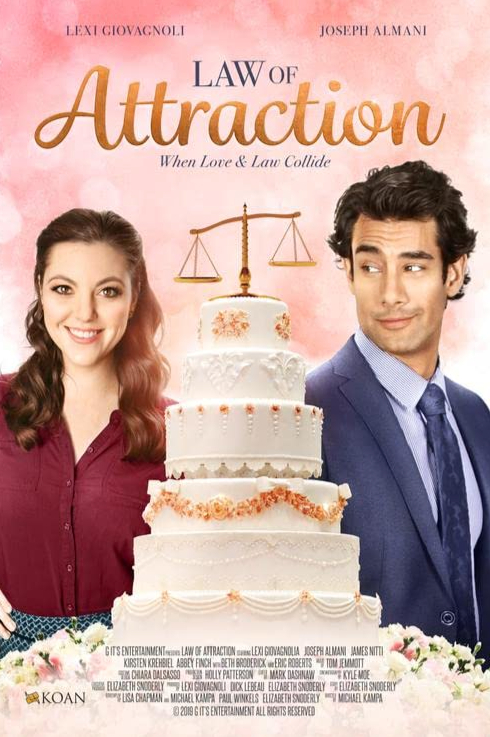 Allison Williams, a young female attorney, tries to impress her law firm partners in an attempt to make partner with her first big case, but she is jeopardized by the opposing attorney, Derrick Walker, who has been a real jerk in their phone calls and emails . When she meets a really nice guy in her neighborhood and then later connects with him at a destination wedding, she starts to have strong feelings for him, but she will later discover that he is the opposing attorney on this important case. Will love prevail?

There is a certain irony in the title of this romantic drama/comedy. A man and a woman who are attracted to one another are both lawyers. And to add to the significance of this, they are opposing attorneys on a case, although they are not aware of it for a time!

Allison Williams (nicely played by Lexi Giovagnoli) is also called “Sunny” and Derrick Walker (Joseph Almani) also has a nickname, which is “D.J.”  Almani turns in a good and charming portrayal as Derrick.

In the beginning of the movie Allison is walking toward her workplace and is on the phone with her best friend and fellow employee, Sarah. She is talking about a big case which if she wins could land her the position of Junior Partner at the law firm. Allison also happens to be dating the son of a Partner attorney in the firm, Henry Murphy (played by the dependable Eric Roberts). His son is Max Murphy (James Nitti) and he does such things as walking away when Allison is talking to him, her back turned, so she doesn’t realize at first he has moved into the next room!  She keeps hoping he will “pop the question” but his motivation seems to be more geared toward having fun and doing as little as possible. In one scene when some food is delivered to the door, he tells Allison he left his wallet in the car and could she please cover the bill.

Allison is ordering a strong drink at the coffee shop, a mocha with espresso, when a man in line jokes, “That’s quite the order.” “I’m expecting a challenging day,” she says. “No judgment” he replies. She will soon run into the same man again, D.J., and she learns he is to be paired up with her at her friend Becca’s wedding.

The movie maintains a nice balance between drama and comedy, and the suspenseful buildup as to when D.J. and “Sunny” (Allison) learn they are opposing attorneys on a case. In one humorous scene, Allison falls asleep with her head on her work desk, and she wakes up with a sticky note clinging to her cheek! The music is good too, and features a nice song titled “It’s time for us to say hello”. The end song about getting to “know you better” is also quite catchy.

Allison’s “bestie,” Sarah, doesn’t like Max, and calls him a “leech.” Allison replies that it’s difficult to find a man with an attorney’s lifestyle. When D.J. and Allison run into one another again, there is a palpable chemistry between the two. “Are you stalking me?” he jokes with Allison. D.J. is a friend of the groom, and is to be a groomsman, so the two soon learn at the rehearsal party that they will walk down the aisle together as Allison is a bridesmaid.

D.J. and Allison work on a dance together at the party. The dance instructor suggests at one point that they all take a break to “powder” their noses, and he includes the guys in his comment!

The sparks fly in more than one way when Allison learns that D.J. is actually “Derrick Walker” and his name appears on the bridal party list. “I don’t want to be anywhere near you!” she exclaims. Yet they manage to still walk down the aisle together at Becca’s wedding and when Becca tosses her bouquet it is Allison who catches it. But who will be her groom? When Allison finds Max cheating on her, it would seem a cracked door might remain open for D.J.-especially when he removes himself from being an attorney for the controversial case. Without giving the details of the ending away, we will say that the audience should be happy with how it is all wrapped up. A nice comment comes from Derrick who says, “It’s everything you do after you say ‘I do’ that matters, right?”

The film contains some mild language, and several drinking scenes or references to drinking. Other than that, it is a wholesome movie, for the most part, and it has earned our Dove seal for Ages 12+.

This movie contains likable lead actors, a suspenseful story and nice music, and its romantic slant is sure to please a lot of viewers.

A few couples kiss, and a man cheats on his girlfriend and is seen kissing other woman.

A man kicks an object on the beach in anger and hurts his toe.

A few comments about getting drinks and an “unlimited free alcohol” comment; wine-testing scene; drinking of champagne and other drinks including a character who drinks a beer; a toast; a couple of characters are inebriated.