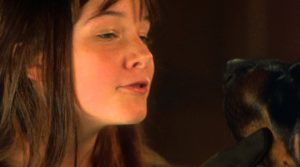 Hubert, the faithful canine companion to the late Duke of Dingwall, inherits the Duke's estate, the royal jewels, and the official title of Duke. And to ensure Hubert's well-being, Charlotte, the butler's niece and Hubert's best friend, is made his legal guardian. As the two try to fit in, they meet Cecil, the Duke's conniving nephew, who plans to get rid of them.
Watch Trailer
Watch Trailer
1
Negative Rating
12345
SexLanguageViolenceDrugsNudityOther
5
Positive Rating
12345
FaithIntegrity

This 1999 film features a great deal of canine slapstick comedy and plenty of heartfelt moments throughout, as we follow Hubert and Charlotte fitting into their new roles of royalty. Before the Duke of Dingwall passes away, there are many moments presented that allow the audience to get to know the main cast, as well as their relationship with Dingwall, better showcasing the impact of his passing.

The challenges of duke-hood gradually take a toll on Hubert and Charlotte, as the political pressures of the country, as well as the Duke’s nephew’s constant efforts to be rid of the hound, come to a head.There is also a touch of romance sprinkled in between the newest chef and Charlotte, and Hubert and his array of female dogs chasing after him for his fame.

As a whole, The Duke is jam-packed with family fun and crazy antics. However, one off-screen scene is alluded to, which includes Hubert’s love interest being kidnapped. Another not-so-puppy-friendly scene features a dog tossed overboard into a pond. With that said, the overarching themes of this film rely heavily on friendship, loyalty, and even praying for friends. These pawsitive elements award The Duke Dove-approval for All Ages.

Ever wonder what a dog could do with an entire royal inheritance? The Duke answers that question and many more in a way that you and your kids can enjoy.

While not present in the film, faith still shines through with the themes of family and friendship that are greatly shown throughout the film. There is also a scene where Charlotte is praying for the Duke’s health when he suffers from a heart attack at the start of the film.

While never actively present, there is a scene where Cecil kidnaps and imprisons Hubert’s love interest, Daisy, and then deliberately tosses anotherdog overboard into a pond.

While never actively present, there is a scene where Cecil kidnaps and imprisons Hubert’s love interest, Daisy, and then deliberately tosses anotherdog overboard into a pond.