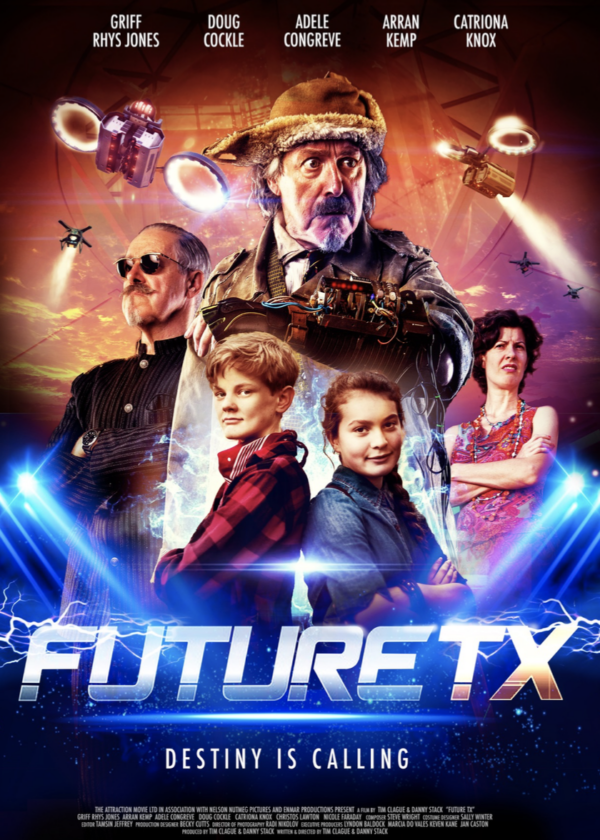 Dylan and Molly are a couple of everyday twelve-year olds. When they get their first mobile phones, they’re shocked – the phones both ring at the same time. When they answer, a Mystery Man (caller display “Future TX”) says he’s calling from the future and he needs their help. But how can Dylan and Molly possibly help someone from the future? How can they be sure this isn’t just an elaborate prank or a scam? If it’s real, why would someone with such advanced technology need their help? Suddenly the kids are living a life full of stakeouts, gadgets, weird characters, and drones – drones that chase them through gardens, alleyways, and houses. The kids soon realize they must decide for themselves what’s right and wrong – and choose their own future.

“You choose your destiny, or does your destiny choose you?” This is the opening narration of this unique film, with a different take. Two friends, Dylan (Arran Kemp) and Molly (Adele Congreve), both get mobile phones on the same day, and they ring simultaneously! They hear a voice on the other end claiming to be from the future. They are told they must help to secure the future. As the narrator adds, “If you had the choice to do what you’re told, or to save the world, what would you do?”

Despite these two being chosen to save the future, they are still preteens and Dylan is not pleased at all when he’s told by his parents they are moving, and in just two weeks. They both insist it’s a done deal, and Dylan asks, “There isn’t a good cop, is there?” He uses the situation, however, to ask for an expensive mobile phone. Later, he and Molly go to a phone store and they get a bargain, with Molly being able to get one too because of a great deal. But when they go outside and they receive calls at the exact same time, and they see the mobile store closed as soon as they left, they know something unusual is happening. The call is from the year 2048!

The voice on the other end says that physical time travel is not possible but data transmission from the future is. All sorts of wild ideas result from this “time” anomaly, including Dylan’s mom’s theory that he has a phone app which links him with the future! Dylan attempts to do some “quantum” computing, but he only knows that the future looks bleak unless something can be done to alter the future. The story stays grounded in showing such things as Molly becoming frustrated with Dylan, and Dylan telling his mom he’s not moving, after which she sends him to his room. Still, Dylan and Molly must battle flying drones and things that most teenagers would never have to contend with.

The film is fairly wholesome, although the dad makes a comment to Dylan, saying, “It’s time to evolve, young man” and the word “sucks” is used a few times. But his mom sends him to his room when he talks back, but ultimately both Dylan and Molly are good examples of kids trying to do the right thing.

THINK ABOUT IT: The themes are good, emphasizing how much our lives are determined by the choices we make, and what is handed to us by life. The importance of making decisions based on the good of all is also nicely featured. Lines such as, “Do we have our own free will or is choice an illusion?” are used. These ideas are nice topics for parents to discuss with their children. And a good discussion can result from this line: “Who decides what’s right and what’s wrong?” This would be an opportune place in which to discuss the Lord and the Bible. The film has earned our Dove seal for Ages 12+, as the subject matter might be a bit heady for young kids.

THE DOVE TAKE: This film features kids as the would-be heroes and emphasizes the importance in decision making in determining the future.

A boy and girl truly want to save the world in the future; kids help one another in trying to save the future; a boy shoves a girl out of the path of an oncoming car; parents care about their son and make him mind.

Drones chase kids; We see kids about to be given shots to put them to sleep; girl is either struck by car or almost struck (it’s not clear) but she is knocked to the pavement by a boy who tries to rescue her and she comes to shortly afterwards.

Kids are given shots to put them to sleep and they awake a short while later.

Kids are a bit terrified as drones pursue them and they attempt to save the future; tension between characters; kids get free money from an ATM but we learn it is part of the “future” plan; a boy talks back to his mother but he is corrected.