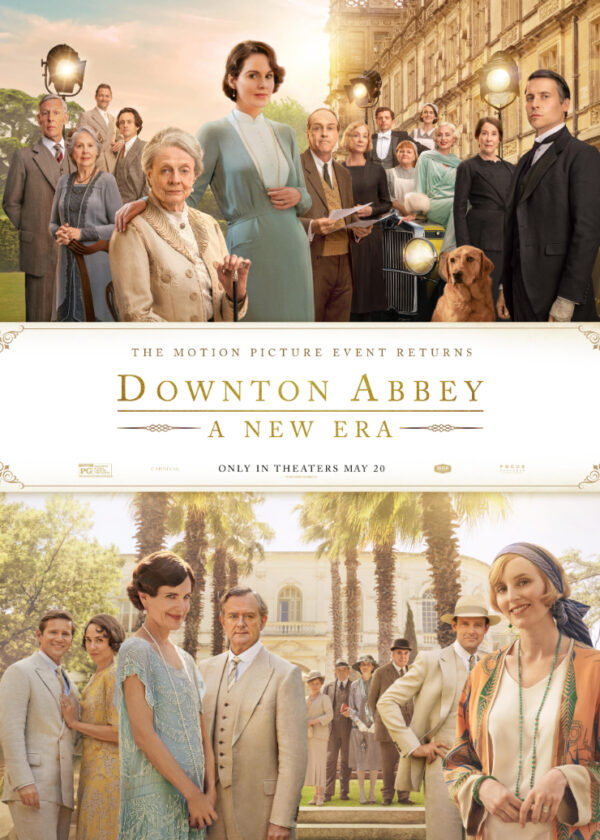 Follow-up to the 2019 feature film in which the Crawley family and Downton staff received a royal visit from the King and Queen of Great Britain.

This beloved series is revived once again on the silver screen, as the crew from Downton are navigating the modern era. A film is being made at the abbey, and while the patriarch and half of the family avoid the invasion by going on an adventure of their own in the south of France, Mary (Michelle Dockery), who is as resilient as ever, stays behind with most of the ever-entertaining Downton staff, and gets caught up in all the fun, confusion, and romance of movie-making.

This “new era” at Downton embraces the 1930s head on with a throwback to the most popular musical ever made, Singin’ in the Rain, in which everyone involved struggles with transitioning from silent film to “talkies,” highlighted by the fact that the most famous actress of the silent screen has a terrible speaking voice, so she is dubbed by the delightful Debbie Reynolds. Likewise, at Downton, the project runs into similar trouble, and everyone needs to quickly shift gears and get creative in order to satisfy new expectations, so the Downton crew is to the rescue with Mary, especially, saving the day, and the household staff taking on roles they never thought they would — even the snobby famous actress learns some hard lessons with surprises at every turn, and it is all done with the typical gorgeous costuming that this series has been so well known for, the class and propriety that the Crawley family has sustained for generations, and the humility that makes the Downton staff so beloved.

Meanwhile, Hugh Bonneville and  Elizabeth McGovern reprise their well-respected roles as Lord and Lady Grantham, when they take some of their family, and their trusted butler Mr. Carson (Jim Carter) to secure a villa in Nice, France, that they have mysteriously inherited, and where many questions arise as to the circumstances surrounding this unexpected gift from an old friend. Some fears are elevated and alleviated, and lovely scenes of the family on holiday in this enchanting countryside are picturesque and full of romance. All the while, a long expected goodbye lingers on the horizon that every viewer has anticipated for some time, and it is handled tastefully and with the panache that only Violet Grantham (Maggie Smith) could pull off.

Throughout, the head butler at Downton, Thomas Barrow (Robert James-Collier), who is known for repressing his same-sex tendencies in this age of propriety, makes a decisive choice regarding his future, and although his struggles are highlighted at times, they are only alluded to, leaving the film free from any real heightened drama.

As a result of this latter omission, where nothing too extreme takes place at any time, the movie is a bit reminiscent of a made for TV drama that might fall a bit flat for those looking for a more stimulating viewing experience. It is, nonetheless, lovely to revisit these tried and true characters, as they move forward into modern times, and with any luck, there will be more new eras to come.

An enchanting escape back to the world of the Grantham estate, this light-hearted take on life at the abbey is a must see for any Downton fan.

Characters are loyal and caring to one another, avoid conflict, and are gracious to strangers

Several allusions are made to one character’s homosexuality, although it is never openly addressed.