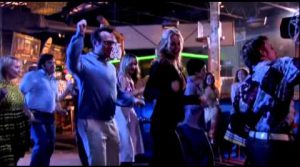 In a world where the holidays are run by the efficient Bureau of Yuletide Affairs, a bitter and burned-out Ghost of Christmas Past decides to go AWOL while on a "mission" and leave his "target" stranded in 1965.
Watch Trailer
Watch Trailer
11
Negative Rating
12345
SexLanguageViolenceDrugsNudityOther
3
Positive Rating
12345
FaithIntegrity

Chasing Christmas is a highly imaginative movie, which does a nice job in revealing that we all have junk from our past lives we could dwell on, but how much better to dwell on the good that happened, and the things that went right.

Tom Arnold stars as Jack Cameron, a businessman that runs Cameron Coats, and Jack hasn’t been jolly in a really long time. He hates Christmas and refuses to buy his daughter, Suzanne, a Christmas present. He is willing to go to the store with her and purchase a gift “just because”, but in no way does he want it to be called a Christmas gift. He doesn’t decorate and gets upset when she hangs up stockings over the fireplace. When the neighbor kids present him with a large Santa decoration because he hasn’t decorated his home, he places it in the street where it is promptly run over by a mail truck.

The reason? Back in 1998 while attending Suzanne’s Christmas pageant at Andrews Middle School, his wife Alison (Sarah Jane Redmond) slipped away to apparently use the restroom. Instead, she met the family dentist at the coat check area and had an affair with him. Jack has strongly disliked Christmas ever since.

The goal of the ghosts is to help get Jack over being bitter about his past life and to recognize the gift that he has in his daughter, and that he did enjoy over 18 years of a better than average marriage. However, the candy cane time device that Past has is broken by him, and Present has to travel to the past to set things right.

One of the strong points of this film is not only its theme about having a grateful attitude, but it is actually very funny in various scenes. In one scene, the disgruntled Past is complaining about Dickens’ novels, including A Tale of Two Cities, and he says, “It was the best of times, it was the worst of times…I mean, make up your mind!” In another comedic scene, Jack is tied up to a chair with Christmas tree lights (lit up) while Past attempts to escape. The film bounces around between the present, 1965, and 1998, and it does a good job in maintaining the look of the various time periods. For example, the TV set and cars in 1965, not to mention house colors, are consistent for the period. And at one point it’s pointed out that there are no seatbelts in a car because they were not put in many cars back then.

Jack bickers with his daughter Suzanne a bit, but despite the tension between them it is obvious they love each other. In fact, Suzanne later apologizes for talking back to him. And when Jack begins having feelings for Present, he realizes he has the capacity to love again, even though he has been divorced for many years. Without plot-spoiling, we will tell you that everything works out in the end, but not necessarily in the way the viewer might think.

The actors are all spot-on in the film, and with the dashes of humor sprinkled in along with the holiday theme there is a lot to like. We do wish to note that there are a few sexual comments and innuendos. Although we are awarding the 12+ seal to the film, due to its theme of the importance of family and moving forward in life without bitterness, parents should consult the content listing. Some parents may want their children to be a bit older before viewing the film. Discretion is advised.

This film features enough cheer and funny moments to be an enjoyable watch, any time of the year.

A few fights including one in a bar that involves several characters punching and rolling on the floor.

Kissing in a few scenes; a couple kiss passionately and get on top of a pool table; a father doesn’t like his daughter’s skimpy dress which was bought in London and says London must have “Hookers Are Us” stores; a wife cheats on her husband; a few innuendos.

A few fights including one in a bar that involves several characters punching and rolling on the floor.

Several scenes of drinking including champagne, wine, whiskey and beer; comments about having a drink and getting drunk; a couple of bar scenes; a few characters are drunk; a few characters smoke cigarettes and a character says he really needs a smoke; cigars are seen being sold.

A few arguments between a daughter and her father and she back-talks him but later apologizes; tension between other characters in the film.