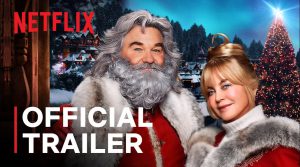 Kate (Darby Camp) and her brother are in Mexico as her mother closes in on engagement to a new man, and she can’t wrap her mind around how her mother could be over her dad’s death. She runs away, while her mom’s new beau’s son, Jack (Jazhir Bruno) tags along. Their trip is manipulated by Belsnickel (Julian Dennison), cursed to take the form of a human after committing all five transgressions that disqualify him from being an elf, into helping him into the North Pole. There, Belsnickel challenges Santa, and accidentally destroys the Christmas Star which powers the North Pole and Christmas itself.

As part of his plan, Belsnickel’s yule cat Jola attacks and gravely injures Dasher, as Belsnickel also poisons all of the elves with a personality-warping potion. With Mrs.Claus remaining behind to care for Dasher with Jack, Santa and Kate set out on a journey to have a new Christmas Star manufactured out of the Star of Bethlehem that takes them across space and time.

Several aspects of the film stand out in this beautiful blend of live-action and animation that speak to a deeper understanding of Christmas. Yes, it’s full of hijinks as the real Christmas heroes fight off an army of (drugged) mischievous elves, Belsnickel’s reindeer-like hyenas, and Belsnickel himself. But the fact that the Star of Bethlehem provides the essence of what makes Santa’s Christmas into Christmas? The explanation of Kate as a “true believer,” one of many who believe in Santa and the power of Christmas? These things shine a deeper level of what Christmas is about, akin to The Chronicles of Narnia: The Lion, The Witch, & the Wardrobe instead of specifically quoting Scripture itself.

Christmas Chronicles 2 has a charming, family-friendly take that builds on the Christmas mythos, providing the audience with an understanding of what it means to really believe, and sharing some life lessons about accepting change, forgiving others who hurt you, and choosing not to run away from your problems.