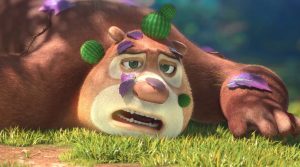 Boonie Bears: Blast into the Past

Here’s an animated movie with vibrant colors, settings of prehistoric and modern ages, and bears and wolves as the heroes and villains! An average guy named Vick showcases ancient cave paintings to people in the modern world, with one skeptic saying, “You probably painted these yourself.” The truth is that Vick doesn’t really know how old the cave is. But then a magical portal leads him into the past and soon he is part of the ancient world in which bison are common! He is friends with two bears, Briar and Bramble, and they become mentors to a young wolf named Fei-fei. Fei-fei is unlearned and untrained, but she has a big heart and is passionately devoted to her friends. In fact, when an evil leader of a pack of wolves plans the demise of Briar and Bramble and Vick, it is Fei-fei of all characters who comes to their rescue.

There are a lot of cliffhanger moments in this film, with characters falling off a cliff and barely surviving, and the bad wolves attempting to make our heroes their lunch, with the good guys narrowly escaping filling a wolf’s belly.

The film is intense and dark in many scenes, with a constant barrage of the animal-characters hitting and kicking one another or doing the same to Vick. A group of ancient cavemen show up and they battle the animals too, using their clubs when necessary. The movie is definitely too intense for young viewers. It would have been nice to have seen a bit less violence and more character development but the moments when the friends stick up for one another are nice moments. In fact, Fei-fei makes one sacrifice that may cost her life. Does she survive? We won’t spoil it but there are several suspenseful moments when you wonder if certain characters will survive. The evil wolf is a snarling, mean-looking, dark-eyed villain that will intimidate very young viewers. He’s scary!

One of the fascinating scenes of the film is a huge Panda bear, asleep, while surrounded by little pandas. In fact, in one scene, featuring a funny moment, a bear calls them, “You little black and white puffs of balls!” Another funny moment features one of the bears experiencing life in this ancient world and learning the hard way. He steps on an ancient bridge which breaks, he steps on a prickly plant and his shout of pain can be heard for miles, and he eats hot food without knowing it and his reaction is priceless. In another comedic moment a character offers a woman flowers and, not knowing what to do with them, she eats them, spits them out, and declares, “Not very tasty!”

Everything happens to the bears and Vick including being tied up, pursued by the wolves, and dealing with the wild animals of this prehistoric jungle. But it also features some heart-warming reunion moments, when our separated heroes find each other again, safe and alive. There are some nice moments of courage displayed in rescuing others.

As already noted, there are a lot of fights in the movie and some dark scenes where character’s lives are in danger. A scene with crocodiles is one of the scary scenes featured in the movie. A wolf asks another, “If you can’t catch a child, what good are you?” There are a few utterances of lines too such as, “Worthless fools!” and “You liar!” We are therefore awarding our Ages 12+ seal to the film, while noting that parents should consult our content listing. They might be fine with kids just under 12 watching the movie but it is certainly not recommended for young children.

This movie takes you back to prehistoric times with great animation and dark, scary villains.

A lot of violence, although animated, with snarling wolves trying to devour characters, creeping crocodiles, humans and animals bashing one another with clubs or punching, kicking each other; characters running for their lives; wolves are killed or injured with spears.

A few comments like, “Worthless fools” and “You liar!”

A lot of violence, although animated, with snarling wolves trying to devour characters, creeping crocodiles, humans and animals bashing one another with clubs or punching, kicking each other; characters running for their lives; wolves are killed or injured with spears.

Scary moments with animals which are violent; belching and flatulence; it’s mentioned some people worshipped ancient idols; a shaman speaks of the spirit of the ancient beast sending saviors from the heavens.