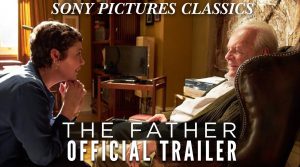 Anthony is 80, mischievous, living defiantly alone and rejecting the carers that his daughter, Anne, encouragingly introduces. Yet help is also becoming a necessity for Anne; she can’t make daily visits anymore and Anthony's grip on reality is unravelling. As we experience the ebb and flow of his memory, how much of his own identity and past can Anthony cling to? How does Anne cope as she grieves the loss of her father, while he still lives and breathes before her? THE FATHER warmly embraces real life, through loving reflection upon the vibrant human condition; heart-breaking and uncompromisingly poignant – a movie that nestles in the truth of our own lives.
Watch Trailer
Watch Trailer
8
Negative Rating
12345
SexLanguageViolenceDrugsNudityOther
1
Positive Rating
12345
FaithIntegrity

As Anthony gets older, it is becoming harder and harder for him to remember what is going on around him. His daughter, Anne, works hard to care for him, but finds it increasingly difficult to maintain a caretaker, as Anthony “has his ways.” Through heartbreaking scenes of inner struggle and disorientation, viewers watch from Anthony’s point of view as he fights to remember the details of his daily life.

While The Father sheds light on the difficulties of memory loss and caring for loved ones who struggle, that seems to be as far as the plot goes. In the beginning the storyline is set up and viewers watch a clear timeline unfold. Within the next few scenes, however, it becomes apparent that the film is from Anthony’s perspective—and from there it becomes more and more confusing with every scene. It is difficult to keep track of the different storylines, as it is not directly explained that Anthony is experiencing different memories within his daily life, and even after connecting those dots it’s hard to know which scenes are reality.

With that being said, the creators of this movie did a great job of incorporating those scenes into one film. It may be confusing, but if a viewer keeps track of the sudden shifts, it has the potential to emphasize how hard memory loss can really be—on both the person experiencing the memory loss and his or her family and caretakers. Viewers should be aware that The Father shows raw emotion, and it does little to soften the reality of memory loss.

There are some vulgarities in The Father, but the majority of them are related to the stress of Anthony’s uncertainty and his care-taking. For example, much of the cursing comes from Anthony’s imagined situations, like Anne’s ex-husband taunting him. There is one scene in which Anne imagines suffocating her father, which is heartbreaking to watch as it is in retaliation to his anger and hurtful words.

The Father is a film that may be difficult for some people to watch. It does not sugar coat memory loss and it certainly depicts real emotional turmoil. It does, however, do a fantastic job of showing how hard it can be to lose memory from that person’s direct perspective. Viewers should be prepared to follow the plot closely but should also expect a tale that is truly authentic and brilliantly written.

Due to the language, this film is Not Dove-approved.

In The Father, viewers are shown the effects of memory loss from Anthony’s perspective as he struggles to live his own daily life.

Anne imagines killing her father and appears to strangle him in his sleep; Anthony gets very angry and yells.

Anne imagines killing her father and appears to strangle him in his sleep; Anthony gets very angry and yells.