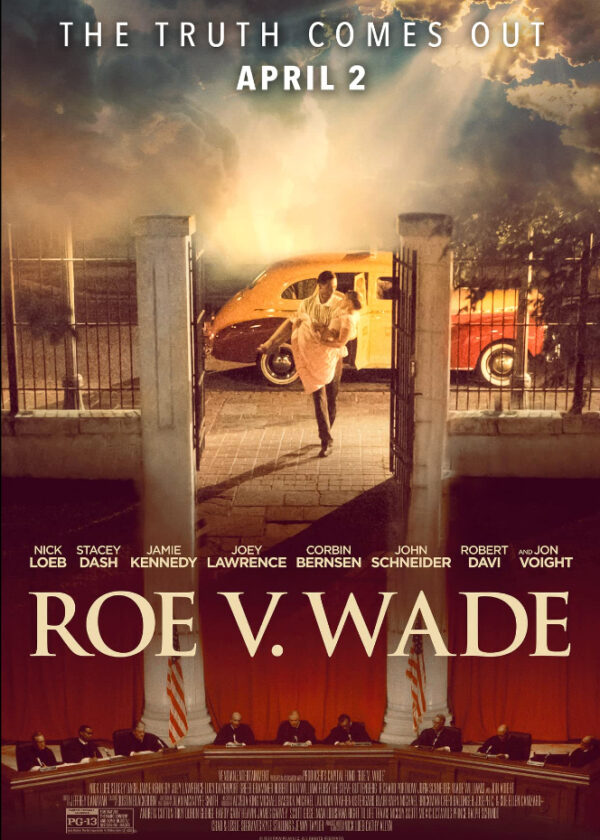 Dr. Bernard Nathanson and Dr. Mildred Jefferson square off in a national battle in this untold conspiracy that led to the most famous and controversial court case in history.

Roe v. Wade, the feature docudrama, re-examines the culture-changing 1973 Supreme Court case with a different and interesting perspective — that of Dr. Bernard Nathanson (Nicholas Loeb), abortion doctor and co-founder of the historical abortion movement. Throughout the film, assumably after a change of heart, Dr. Nathanson narrates, stopping the action here and there, to reiterate or elaborate on important points.

In New York City, 1970, Dr. Nathanson, a practicing atheist, along with writer and organizer Larry Lader (Jamie Kennedy) sought and acquired the help of the National Organization of Women (NOW) leader, Betty Friedan (Lucy Davenport) in order to legalize abortion, continuing the work of Lader’s mentor, Margaret Sanger. Sanger, is best known for founding Planned Parenthood (PP). What is not well known is Sanger created PP partially in hopes of stemming the increasing black population. According to the film, Sanger was once invited to speak at a women’s KKK dinner and proclaimed, “The mass of Negroes still breeds carelessly and disastrously.” Not too interested in Sanger, Dr. Nathanson convinced himself legalized abortion would save women’s lives.

With PP in focus, Lader, Dr. Nathanson and Friedan launched the National Association to Repeal Abortion Laws (NARAL). The women’s movement was exploding in the early 70’s thus NARAL enjoyed victory in the New York Assembly, getting the first pro-abortion law passed. The country began to cast a wary eye on the horizon.

Opening an abortion clinic in New York (to save women’s lives) became super profitable for Dr. Nathanson and his colleagues, eventually requiring new and quicker methods of extraction, including suction — credit given to the Chinese government for that one. Seeking to override abortion laws nationwide, NARAL and PP procured a young, pregnant runaway, Norma McCorvey (Summer Joy Campbell) to “defend” in court against the outspoken, volatile, antiabortion Attorney General of Texas, Henry Wade (James Dumont). The pieces fell into place, right down to finding malleable, green lawyers, Sarah Weddington (Greer Grammar) and Linda Coffee (Justine Wachsberger), whom PP could control. The duo promised Norma they could arrange an abortion in exchange for her signature. Once they had the signature from Norma, who never received that promised abortion, they blasted the Texas courts with a suit to protect women’s rights. Winning there, NARAL proceeded on through the court system, all the way to the Supreme Court. Their strategy: in this ripe time, refocus the argument on the woman and her rights, avoiding the exploration of the personhood and humanness of the fetus.

Strategic politics, orchestrated mainly by Lader, with Dr. Nathanson right behind, struck enjoyably at pro-life groups such as Catholics and evangelicals. Lader and Dr. Nathanson, between the dozens of abortions he performed daily, offered up purely fabricated statistics as “facts” to the collaborating press to publish. Let’s call them PFAs — pulled from air. Dr. Nathanson freely admitted using PFAs to support the fallacy that women were dying routinely from back alley abortions, that 60% of Americans favored abortion, etc. He and Lader “reported” pro-abortion PFA stories three times per year to Time Magazine and used Hollywood connections to get stories written into TV shows and feature films. Sound familiar?

More repulsive was the cunning clergy/rabbi network of profitable referrals. When women, not living in New York wanted an abortion, some would seek help from a trusted “spiritual” leader who then referred them to underground “clinics” organized by Lader and company. Even five-star hotels were used for chopping and scraping. Lader became rich.

But NARAL wasn’t operating without scrutiny. To combat what they deemed a mission of mass barbarism, The Right to Life Committee was founded by Father McHugh (Tom Guiry), Dr. Mildred Jefferson (Stacey Dash), NYU Law Professor Robert Byrd (Joey Lawrence) and a conservative women’s group leader, Ellen McCormack (Mindy Robinson). They lacked the money and funding which NARAL enjoyed — fundraising at places like the Playboy Mansion — but they had the ear of Texas AG Wade, which added notability and access.

Prof. Byrd and the committee were elated when the Supreme Court agreed to hear Roe v. Wade. So much could be argued for the “silent minority” such as DNA evidence, personhood of the fetus, the humanness of every developmental stage of life, etc. But like a twist in a movie, we are soon to discover politics’ feelers had crept insidiously into SCOTUS which had been compromised by prideful in-fighting, compromised by family pressure, compromised by the times. Loeb’s Roe v. Wade lays open an interesting story in itself, the inner workings of SCOTUS’ handling of the case. Heavy hitters like Jon Voight, Corbin Bernsen, John Schneider, Richard Portnow, William Forsythe and Steve Guttenberg portray Supreme Court justices, delivering solid, meaty performances which unmask dynamic personality struggles of SCOTUS at that time. Ultimately, after hearing a re-argument of the case, Roe’s attorneys were able to appeal to the Court’s focus on the rights of the mother over a fetus’ rights and personhood. Confronted with a Petri dish of women’s rights protests — fed by false information about abortion, as well as family pressures — the Court chose poorly.

Being a docudrama, the film asserts many historical details and quotes. I would advise, in this time of compromise and doubt, researching and fact-checking claims made by any documentary. The filmmakers have provided historical footage, such as the 1984 statement of a contrite Dr. Nathanson, who reveals sadly, the silent scream of an injured unborn child being aborted. They add in a TV Dateline interview with Norma, aka Jane Roe. Overall, the filmmakers seem to be diligent in delivering their facts, which surely required massive research. A few things story and production-wise: The film seems inconsistent in places. For example, it asserts a major impetus for having abortion legalized was Lader’s desire to carry on Sanger’s racist work, depopulating the black community. No blacks were portrayed as abortion patients in the film, yet a statistic given stated African American women have suffered almost 40% of the 61 million abortions performed since Roe v. Wade. Superfluous scenes about Freidan’s fits could easily be shaved, and a few awkward dialogue scenes are troublesome, as are back-to-back interviews using both the real life person and the actors. Dr. Nathanson’s character could have used some gray hair; instead he remains 30 years old for 30 years!

On the brighter side, the cinematography pulls us into the moment and undergirds the emotion of the scenes. For the most part, the acting serves the film well, with Loeb recreating the gripping horror of realizing he has slaughtered innocent children. Roe v. Wade is certainly worth the watch for older teens and up. There are some bloody scenes, one depicting buckets of aborted fetuses which might be too much for some 12 year olds. The sanctity of human life and the fact we are God’s creation aren’t given much discussion. But since the content is more adult oriented, and is an important and relevant film to educate those opposing abortion, Dove gives Roe v. Wade the 18+ year Seal of Approval.

Dr. Bernard Nathanson (Nicholas Loeb) narrates his experience and backstory of Roe v. Wade, including the inside politics of the Supreme Court, giving pro-life advocates an understanding of the fateful case.

Dr. Nathanson becomes a believing Catholic, after years of being an atheist Jew. No mention of the gospel. One scene of Nathanson yelling at God.

Production quality is very good, but has script weaknesses.