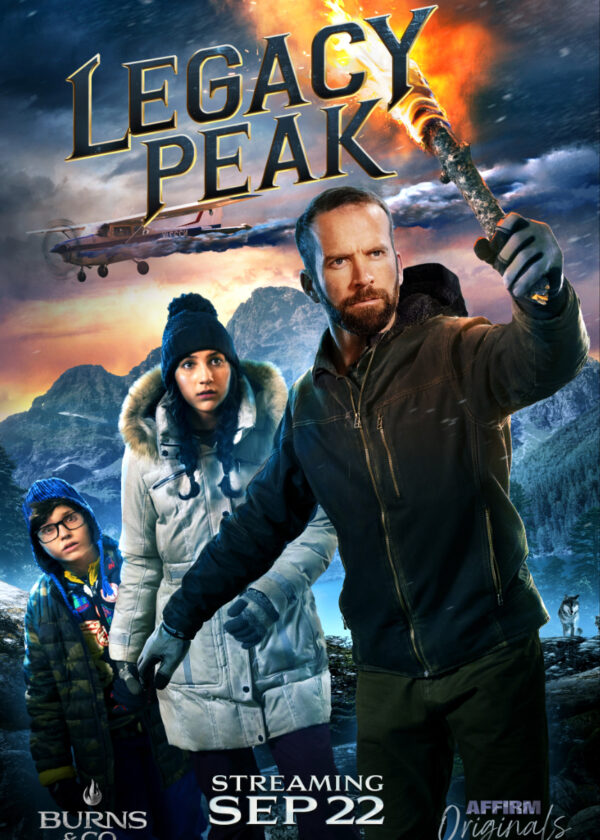 Jason is on an adventure to win the hearts of Noelle’s kids before they marry. The plan for them to fly to her parent’s cabin days before she wraps up work quickly falls apart and the adventure turns to a struggle to survive before this new family can start a life together.

Legacy Peak is an enjoyable film about the challenges and joys of blended families. A man, Jason, wants to take his future wife’s children on an adventure in his plane before landing at their grandfather’s cabin, where he will propose to their mother. But peril strikes when a flock of birds strike the airplane, destroying the engine and causing an oil leak, where they must make an emergency landing. The three must find shelter and a way to get back home safely. Not only are their survival skills put to the test but also their faith in God. Along the way, not only do they find ways to survive, but discover unconditional love, the true definition of family and most importantly, a loving God Who never leaves or forsakes them.

Legacy Peak is a faith-based drama and deals positively with issues such as blended families and the challenges that come with that situation. Christian viewers will enjoy the pro-family elements as well as other faith- based elements such as families praying together, and a main character who relies on the Lord in even the darkest of situations. This film has additional positive elements such as positive male and female roles, a man leading his family, honor and respect for military and forgiveness.

There is very little families will not like about this film. Set during the Christmas season, families will enjoy this as their next favorite holiday film or even before the holidays. Although the actors are not well known in the industry, their portrayals are superb. The plot is fast moving and contains all the elements necessary for good storytelling. This is one of the best faith based films Pure flix has available.

What is best about this are the Christian elements interwoven seamlessly throughout the film, not forced or contrived. Scripture is used strategically and drives the main points of the plot home to viewers. There are also additional positive elements dealt with in a redemptive way such as adoption, the treatment of orphans and a man speaking blessings over his children.

Having said this, there are light scenes of peril such as landing a plane, and a child getting lost in the woods. There is one scene of violence of a man having to fight off an animal who has attacked him. There is only light foul language, and no sexuality or nudity. There are discussions about taking people’s things without permission as well as abandonment within dysfunctional family systems. Any of the objectionable content, however, does not go further than a PG rating.

Legacy Peak is a family film that parents and older children will enjoy together. Because of issues with peril and a scene of violence, however, this movie may be appropriate for younger children. Because of these elements, Dove gives Legacy Peak the seal of approval for ages 12 and up.

Children will enjoy the overarching element of adventure. Parents will like the strong bonds of family and Christian values such as forgiveness, love and leadership.

Prayer, relying on the Lord during the toughest times.

Honor, protect each other; a man protects his family, loyalty to family

Scenes of peril including a girl crashing into a river, fighting off a wild animal attack and surviving a plane crash, a scene of using a gun is shown.