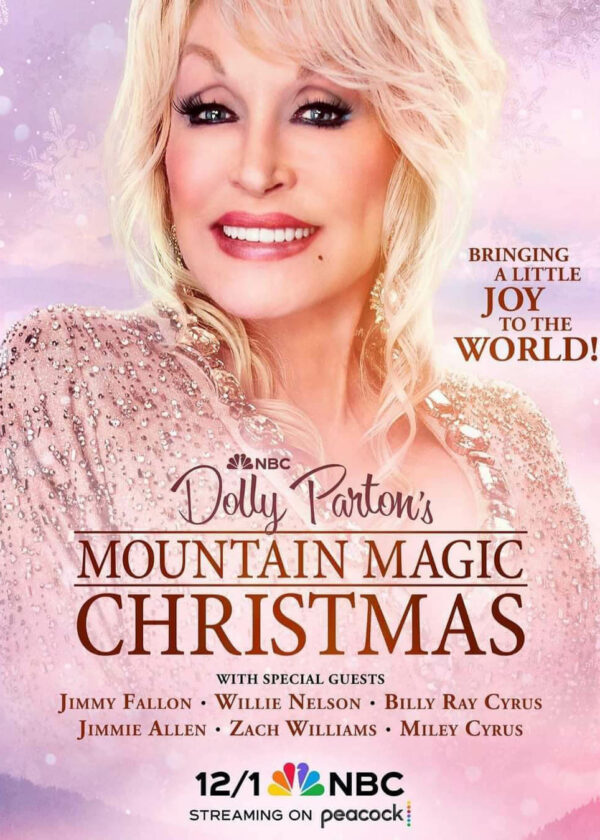 and inspirational vignettes. Filmed mostly at her Dollywood theme park in Pigeon Forge, TN, the musical centers on the behind-the-scenes of filming a musical, giving viewers a taste of the

Smoky Mountains’ way of ringing in the Christmas season. This faith-based special includes a

nice number of sacred hymns such as “Away in a Manger,” “Go Tell It on the Mountain,” and her gospel songs, “The Seeker” and “There Was Jesus.”

When it begins snowing during one of her concert dates, musical icon Dolly Parton comes up with the idea to do a Christmas special filmed at her Dollywood theme park in Tennessee. She enlists her business partner, Sam Haskell, in working out the details, which includes a call to NBC to secure the spot. From there, plans start moving rapidly toward a live production involving some of Dolly’s favorite people. But, like many productions, they hit a few snags along the way, including questioning whether or not bigger and flashier is really better. Parton, playing herself, has an internal debate going through the film of whether or not the bigger numbers and flashier costumes will overshadow the true meaning of Christmas, which for her is about the birth of Jesus Christ. So, between dance numbers with Jimmy Fallon and a duet with Miley Cyrus, she breaks the fourth wall to the camera to explain her faith and share her heart about her relationship with Jesus.

The family-friendly nature of the special is so present that when two characters utter mild profanities it is surprising. Parton then addresses the anxiety that led to those words and turns around and rebukes Satan with a rousing gospel choir number. She then delivers a soul-stirring sermon where she proclaims, “Oh, my God can do anything. My God can heal the sick, mend broken hearts and take our souls to heaven. Satan, listen up. In God’s name I rebuke you. I stand up in His name, look you in the eye and laugh in your ugly face.” It’s a sermon worthy of a Christian TV channel but Parton delivers it on prime-time network television, which is impressive.

In this legacy project that includes many things close to her heart, Parton also has a chance to promote her reading charity, The Imagination Library, with a segment including kids, and her hit single, “There Was Jesus,” with Christian singer Zach Williams. Williams is one of three “wise men” who appear to steer her in the right direction, alongside Willie Nelson and Billy Ray Cyrus. She also enlists two of her sisters for a song about family and loving each other. For her LGBTQ+ fan base, Parton offers a song and message called, “Whoever you are, be that,” along with a brief message about accepting others. It is a strong wink to this community, but younger viewers will receive it simply as a message of unconditional love.

There’s much to be thankful for with Parton’s new special and many things that will warm the hearts of all families, especially Christian ones. When she breaks out into the “Go Tell It” and “Away In a Manger” medley which leads into a refrain of her hit Easter song, “He’s Alive,” she brings a good dose of hometown church to the world. Even with the two mild expletives and recognizing that Satan was the cause of the stress, it’s a valuable lesson for younger viewers to understand the devices of the enemy when they’re faced with similar situations. Also, the overall theme to return to the simplicity of the message of Jesus is the greatest message of them all.

While watching, the viewer will really feel that Parton is saying “If I don’t have another chance to tell you, this is what I want you to remember about me and what I believe.”

“Dolly Parton’s Magic Mountain Christmas” is perhaps the most faith-based offering on network television since “A Charlie Brown Christmas.” Parton’s Christian faith is prominent, and she uses the Christmas season to share it with everyone. The flashy dance numbers and marquee name guest stars will bring the audience, and in turn Parton shares her faith with them.

There is strong Christian faith throughout the television movie, including several scenes where Parton addresses viewers directly with questions of faith and encouragement. She even sings songs that are not necessarily Christmas-themed but proclamations of faith, such as “There Was Jesus” and “Dear God.” In one segment, she calls out the devil and rebukes him in God’s name.

Parton is beloved by the world, and she is the central character of this film. She admits that she’s not a saint but a sinner saved by grace and trying to follow the Lord as she knows how. She longs to return to the simplicity of a family-style and Jesus-centered Christmas.

Three mild expletives such as “d-mn” and “a-s” uttered by main characters are then addressed by Parton as an example of how Satan is trying to attack them.

Parton addresses her trademark cleavage and uses it as a gag in a couple of instances.