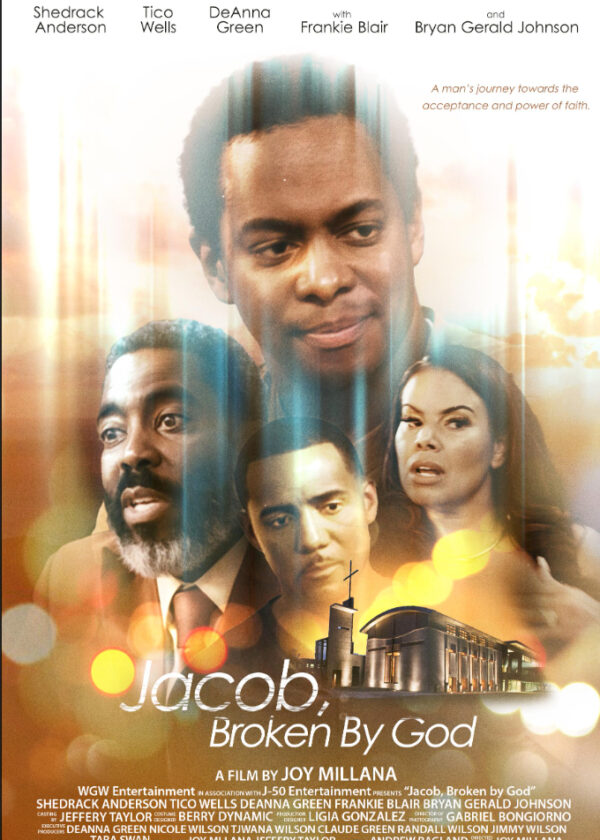 After receding on a life’s journey of a downward spiral, Jacob turns to faith and family discovering and realizing life’s true riches.

Jacob, Broken by God is a purposeful film with a clear message about one man’s journey to truth. Jacob Roe (Shedrack Anderson III) thinks he has his life all figured out until one fateful night when he drinks and drives, and everything unravels. Jacob is tired of living in the shadows of his father and brother, both pastors, who are dedicated to serving God, and he doesn’t want any part of this family legacy, but he quickly learns that he cannot run from God’s call on his life. After serving his time in prison for his choices that fateful night, Jacob works hard to redeem himself by working closely with the man who was injured in the accident and performing community service at a local church, where his natural talent for public speaking gains him impressive recognition, attracting the attention of Bishop Elmore Hilton (Tico Wells), the crooked king of television evangelists.

It is heartwarming to see Jacob be received back with open arms and without judgment after serving his time faithfully, but once again he resists the urging of his family and decides to go his own way when he aligns himself with the wrong people. The viewer then gets to witness Jacob spiral downwards a second time, as his marriage to his faithful wife Rachel (Frankie Blair) is at risk when he is lured into the beginning of an affair with another woman. There is one onscreen passionate kiss, and Rachel walks in to put an end to this betrayal before it goes any further. However, the hurt that everyone bears from Jacob’s actions is well-portrayed, and appears irreparable.

But Jacob learns that nothing is lost with God, as he takes a hard look at what his life has become and gives up chasing fame and fortune. Instead, he learns the true meaning of a heart of repentance that leads him back into relationship with his entire family, and he finally sees that the power of forgiveness is the heart of God.

This film about second and third chances through a God Who is full of grace, and through a family that represents this safety and love, is a true and real representation of the gospel.