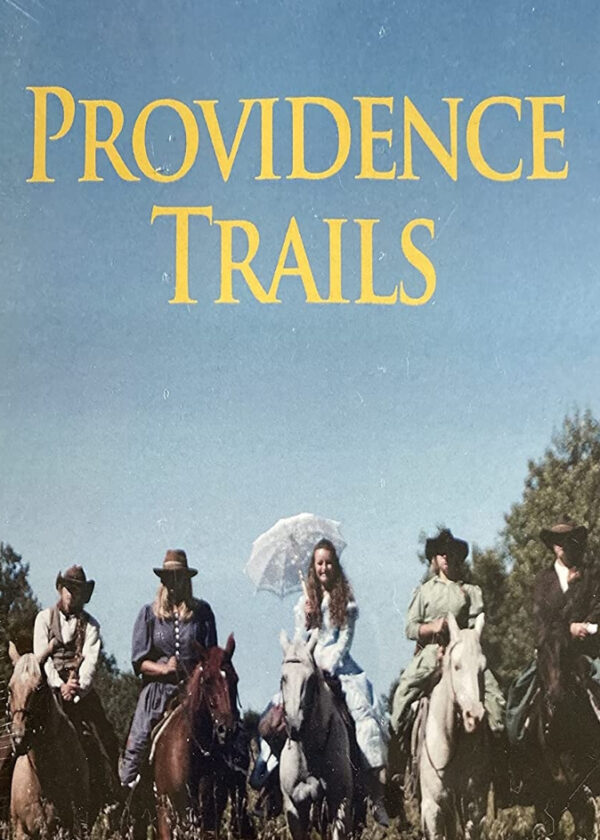 Taking place in the year 1889, before Dakota Territory reaches statehood, a rich government official hires a headstrong woman from the west to deliver a “package” for him. She must deliver the package safely and on time with a crew of women of her own choosing. What could stand in their way? The challenges of the trail become more than they bargained for.

The title Providence Trails gives the viewer an idea of the plot. God’s providence will be needed to help a group of ladies travel from Minnesota to Dakota territory to deliver some important territory papers to be signed, the “package.” In addition is the other “package,” which is a man named Dan Weatherby’s daughter, Amanda.

The story is set in 1889, before Dakota Territory became North Dakota and South Dakota in November of that year.  Weatherby, a rich government official, hires a woman named Anna, a strong-willed woman, to gather a team of women together to make the journey to deliver the official papers. The trip will be much more difficult than any of them imagined. However, included in the group is a Christian teacher who points out godly lessons from the Bible, including that the Bible says in “whatsoever state,” or situation, we are in, to be content (Philippians 4:11). She also encourages prayer during the danger-fraught journey.

Facing bushwhackers, and another group of men who want the papers, this trip will see the ladies exchanging gunfire and doing their best to keep the important papers hidden and protected. The lives of some assailants will be lost.

But there are some comedic moments added to the story too. Amanda, the rich man’s daughter, is very spoiled and life on the trail, which includes smoky campfires at night, is something very new to her. She whines a lot. She gets to bring only one bag for the trip, and that doesn’t seem nearly enough to her. Anna doesn’t enjoy protecting the “princess,” as Amanda is called.

Another woman is selected to be in the group, whom Anna caught cheating at cards after she won a card game. Anna threatens to expose her if she doesn’t join the group. The ladies are to divide $1,500 for safe delivery of the “package” but Anna tells them it will be a split of $1,000. Does Anna plan to make out the most from this bargain?

In one scene, Amanda is told to eat what food they have, or she’ll “get skinny.” She is also told she is “incapable enough as it is!” One of the nice features of this movie is that, during the course of the film, Amanda does grow as a character. The hardships tend to toughen her up a bit. And could it be her father, Weatherby, intended this, which is why he chose her for the journey?

The ladies are held up at one point, and they are forced to spend a few nights at the home of a woman whose husband is away, working. She has kids and one of the women repeats, “I don’t like kids. I hate kids!” But she endures them anyway. The ladies do enjoy some light moments, such as when they splash one another in a creek.

In one nice scene a man comes across a group that tried to ambush the ladies. They are now short on food. The man offers them venison and beans, and shares what he has. Before departing, he leaves an impact on their lives by telling them, “Only what’s done for Christ will last-always be willing to help out your fellow man. It’s the only thing that makes life worth living.”

The Biblical idea of judging others and being judged by the same measure is included in the film’s teaching moments. While the women continue their journey, they find they have to bed down a lot on the trail. In another light moment in the film, Amanda milks a cow for the first time.

There are scenes of shooting, and a few characters are shot and killed. However, none of the scenes is graphic. And a few drinking scenes are included, and one in which a sheriff is seen asleep on a chair out front of his office, holding a bottle of liquor.

The movie has earned our Dove seal for Ages 12+. It has some nice Biblical teaching moments in it, including the idea of forgiving to be forgiven. Without giving the ending away, it is established that the Dakota territory was finally established.  And there are three characters that ride off into the sunset at the conclusion. But what three characters?

For a change of pace, this movie features women Western heroes and a bit of history as well.

Several scriptures are quoted including scriptures on being content in whatever situation you find yourself and on forgiveness; prayer is made; a man says that what is done for Christ will only last.

Women protect one another as they journey to deliver important papers; women pray as they travel.

A few drinking scenes and a scene in a saloon; a sheriff is seen passed out, holding a bottle of liquor.

Tension between characters; a woman cheats at a card game; threats are made; a woman says she doesn’t like kids a few times.