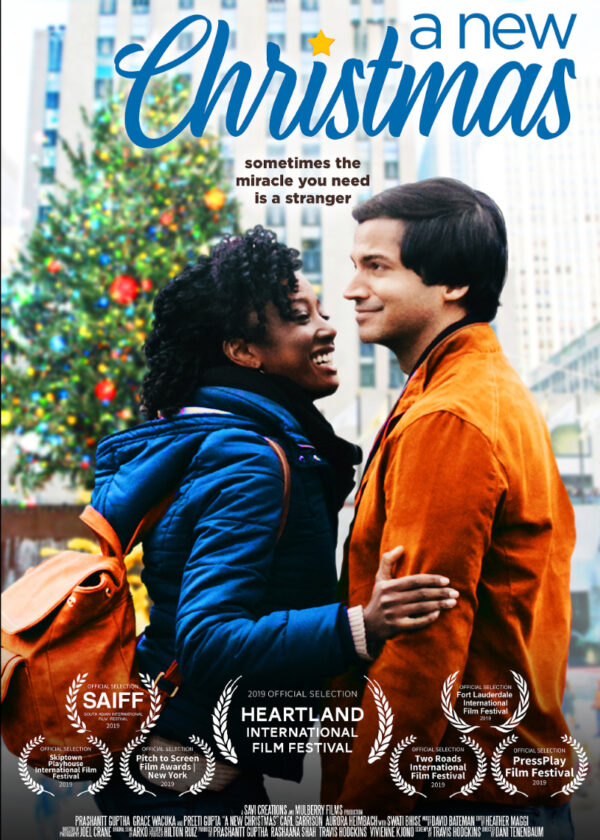 Kabir is a lonely medical student in New York, estranged from his wife and grieving the loss of his mother. When he meets Kioni, a charming film student from Kenya, she persuades him to show her the city’s Christmas decorations, thereby leading him to rediscover the magic of the holiday season and get his life back on track.

A New Christmas is unlike any holiday movie I have seen before, and yet it features a plot that has been used before, a grumpy man comes to appreciate Christmas by the end of the story.

Kabir Bakshi (Prashantt Guptha), a Hindu, is a sad man, having lost his mother about a year previous, and he now lives in her home in New York. He has never taken down her Christmas decorations. Kabir is married to Shivaani (Preeti Gupta), but they are going through the motions. She has tried to keep the marriage going but Kabir has focused on himself for the past year. In fact, he has had an affair with a woman named Catherine (Aurora Heimbach) for some time, but recently has quit seeing her. He has also dropped out of medical school due to his bereavement, but he may have waited too long to be allowed to return.

His longtime friend, Paddy (Carl Garrison), has tried to encourage him.  Garrison is quite good in his role as Paddy. When he learns Kabir has not yet returned to medical school, Paddy jokes with him that maybe the school has met its quota of good-looking doctors. When Paddy mentions Christmas, and that it was Kabir’s mother’s favorite holiday, Kabir becomes edgy, telling Paddy that Paddy didn’t know her.  Kabir tells his friend to “F*** off”.

Later, still edgy, Kabir becomes upset with a woman who takes a photo of him giving some money to an elderly homeless woman. Kabir has a run-in with someone on the street and tells him the same thing, to “F*** off” and he uses his middle finger, with the result being a man pinches his adult son’s ear for swearing too.

Kabir decides to find the woman who took the photo of him giving to the homeless woman, and he manages to track her down. He learns she is from Kenya and that her name is Kioni. The actress who plays Kioni, Grace Wacucka, is quite good, vibrant and charismatic with a frequent smile. Kabir learns that Kioni has applied to film school, and she just had an interview with the school which she says went well. She wants to see Christmas decorations, and he volunteers to show her some. Kioni takes photos of some of the tall buildings, because she likes the architecture, which is unlike the architecture of her native Kenya. Kabir takes a selfie with Kioni at Rockefeller Plaza.

Some of the music of the film stands out, including an instrumental version of Joy to the World. At one point Kioni kisses Kabir on the cheek, who suddenly blurts out, “I’m married.” He admits he’s not sure why he told her that, but he shares that he is separated from his wife. “Hey, we’re just hanging out,” Kioni reminds him. She teases him from time to time as they continue walking, calling him a “dork”. They discuss religion, with Kabir saying his parents were Hindu, but they never really spoke about it. He says he’s “not really anything.” When he admits to not liking Christmas, Kioni exclaims, “You don’t like Christmas?” Kabir says he thinks it’s more about gift giving than religion.

In a funny scene, he mentions that his family was poor, his dad having died when he was young, and he received presents like underwear and socks while watching the other kids receive amazing gifts. He and Kioni laugh about the fact that they both realize now that underwear and socks are amazing gifts, and practical.  He tells her he used his imagination as a kid, and a stick would become his sword, and a large cardboard box would become his castle. We learn that Kioni’s childhood was not easy, either. She became orphaned at a young age and says she wrote letters to Santa Clause, asking for a home and a family.

Kioni tells Kabir she wants to try New York pizza, so they head off to grab a slice and she does indeed love it. In one of the shining moments of the film, Kioni shares that the kids she grew up with, the ladies who helped raise her, and the church lady who paid for her to get to New York, are her “family”, and that she’s “blessed.”

As the story moves toward a conclusion, Kabir’s interaction with his wife, his lover, and now Kioni, are all presented, and Kabir will soon have to make a decision about his future. And he is invited to a party where a video of his mother singing to him about the “boy of mine,” is shown, and he movingly sings after it is over, “Mom of mine.” And could it be that he is gaining a new perspective of Christmas?

The movie, although featuring some sweet moments, also includes adultery, very strong language, and is not a family friendly film. Therefore, it falls short of earning our Dove seal.

This edgy movie features several sad and profane scenes before it finally gets to the good stuff of the importance of family.

A few Christmas songs are played.

A friend remains loyal to his friend who just acted like a jerk to him; a woman mentions the magic of Christmas and attempts to get a negative man to see the good things of the holiday.

Kissing in a few scenes and a man commits adultery with a lover, while he is married; a woman kisses a man on the cheek a few times.

Several strong uses of language including “J”; the “F” bomb multiple times including “F*** off”; A; H.

People bump into one another which causes strong words to be exchanged; a parent pinches grown son’s cheek.

Drinking in some scenes with what appears to be wine and/or champagne.