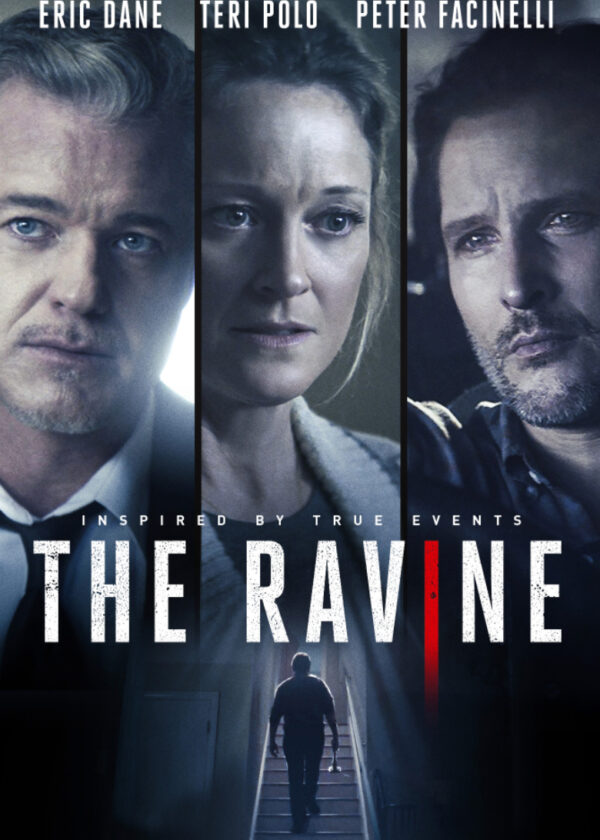 When an unspeakable crime rocks a peaceful community, family and friends are left to wonder if they overlooked the murderer among them or if there might be more to the story. Inspired by true events.

Based on a true story and inspired by the novel by Robert and Kelly Pascuzzi, this film focuses on a man’s grisly murder of his wife and son, and how it affects the people who were a part of his life.

The film contains several moments of violence, including the opening sequence when the man, Danny, is driving in an SUV, and repeatedly utters the words, “I’m sorry, so sorry.” As he races toward a ravine with a big drop, he places a shotgun under his face and simultaneously fires it as he races over the edge, to the big plunge below. His suicide is successful.

The film explores his relationship with his wife Rachel, how me met her, and how his son Evan attempted to come to her rescue, only to be caught in the crossfire. The movie explains that an angel saved Danny’s other son, Chris, from being killed, by locking him in his room.

There are some troubling things in this film, which includes the declaration by a woman, who is portrayed as being clairvoyant, that Danny, despite his murder of his wife and son, made it to heaven. Controversial it is for sure.  In another scene, a young Danny and another man rob a home and a man is beaten with a tie rod, and badly hurt. In one of the positive aspects of this movie, the same man survives and later visits his assailants in prison to tell them he has forgiven them.

The movie is a bit disjointed, and it moves back and forth between the past and present, and it is never made entirely clear as to why Danny took the life of his wife and son.

The film also shows how the murders affect a man named Mitch and his wife, Carolyn. Carolyn deeply grieves for the loss of Rachel and her son. And a man named Tony was left a “weird” message by Danny, which he attempts to figure out. In one chilling flashback, Danny asked Mitch if he ever thought of a life without his wife Carolyn and the boys. “I do have a life with Carolyn and the boys,” Mitch emphasizes. It was apparent even then that Danny was contemplating ending the life of his family.

In one scene Mitch declares he dreamed of Rachel smiling, and she told him she wanted Carolyn to speak at her funeral, and that she would be there with her. Carolyn replies that, “She came to me last night, too.” A detective investigates the murders in an ongoing search for the facts behind the gruesome killings. Was a man named Logan Vonda involved?

One of the flashbacks shows Danny as a young football star, and he had scored the winning touchdown at an important game. He meets Rachel following the big game. Their early relationship is examined. In another flashback we see that Tony told Danny he was a lucky man he wasn’t killed during the robbery of the homeowner. Danny apparently didn’t listen, and unfortunately ended his wife and son’s life and his own, not seeing what he had.

Apparently, the clairvoyant, Joanna, had warned Danny not to follow through on his plan (suicide), which was a very bad idea she tells him.  The nature of the murder is shown, with Danny using a hard lamp base to hit his wife on the head with, and scissors with which he stabbed her.

This movie features some graphic scenes of violence, some blood, and strong language, including multiple uses of the “F” bomb. It also contains several drinking scenes. Appropriately, a lot of sad sounding music plays during the course of the film.

This film has not earned our Dove seal as a family-friendly film.

The contents of this movie, which focuses on two murders, a suicide, and a man beaten during a robbery, not to mention controversial comments about the afterlife, leaves the film outside of family-friendly perimeters.

Heaven is identified as a real place and the idea of forgiveness is mentioned, but these scenes are not based on scripture.

A man wants to comfort his wife; a detective does his best to uncover the truth about a murder case; a man who was beaten forgives the perpetrators.

Kissing by a young couple near a high school locker.

Several scenes of violence including a woman being struck in the head by a hard, lamp base; a man uses scissors to stab a woman; blood; a woman’s bloody head is seen; a man is repeatedly hit with a tie rod which results in blood; a boy is killed; a man puts a shotgun under his head and fires it as he plunges over a cliff into a gorge; some blood is seen.

Several scenes of beer and wine drinking and talk of getting drinks; characters are inebriated.

Boys are seen, swimming in a swimming pool, shirtless.

A woman declares a man that killed his wife and son and took his own life is now “in heaven”; tension and arguments between various characters; death and grief.