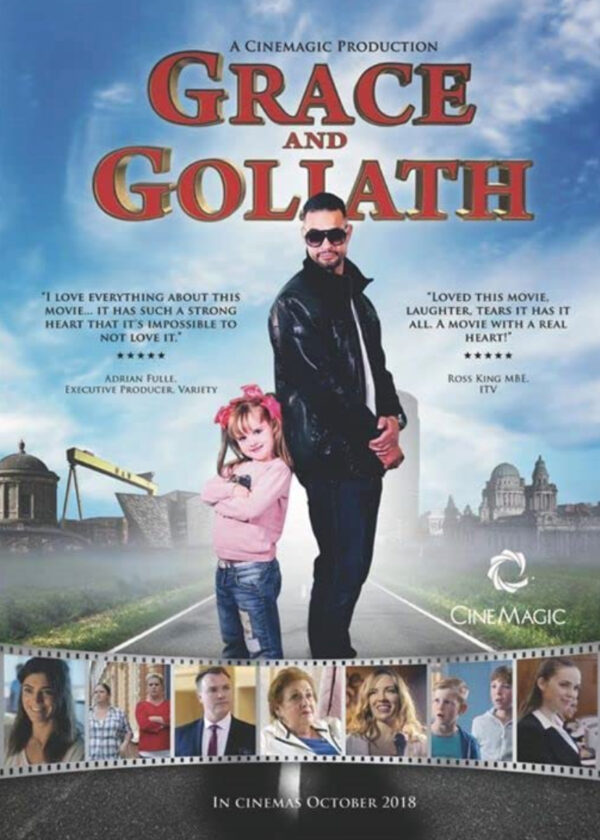 Hollywood big shot Josh Jenkins sweeps into Belfast to make a movie, but before long his world crashes and he loses everything. Hotel cleaner Lily invites him to stay with her crazy family and gradually the people of this ‘strange’ city touch his heart forever.
0
Negative Rating
12345
SexLanguageViolenceDrugsNudityOther
3
Positive Rating
12345
FaithIntegrity

Grace and Goliath tells the touching story of Josh Jenkins (Emy Aneke), a famous, pompous Hollywood actor who loses everything in a business venture while staying in a Belfast, Ireland hotel. When his investors pull out of his film vision, he has nowhere to stay and is taken in by the hotel cleaner Lily (Olivia Nash), who invites him to stay with her and her other boarders: a single mom and her kids.

As he gets to know the mom, Mel (Aoibhinn McGinnity), and begins to understand her plight and connect with her children, he gains compassion for others, and as he watches her struggle with her ex, Marcus (Ciaran McMenamin), also the hotel manager where he stayed and had several negative encounters with, he learns to look beyond himself, and his own demands.

Josh is on his own internal journey, as his mother, who gave him up when he was a baby, was a Belfast native, and he has been searching for her for some time. Lily, the voice of reason, woman of faith, and quoter of scripture is the true heart of this film as the sage with a heart of gold. Elsewhere the family sings Amazing grace, and relies on faith to get through the hard times

There is one conversation about anti-depressants; one slightly aggressive encounter between two main characters; and a couple of short on screen kisses, but this little movie becomes a richly rewarding experience when misfortune befalls the daughter of Mel and the entire community must step in, including Josh, to make personal sacrifices on her behalf. The dance-off to raise money is a high point in this well-directed, acted, and produced film, and the connections made between characters, romantic and otherwise, are heartening, especially given the surprise ending that will bring the viewer to tears.

When Josh finally gets the funding for his film, his focus and the title have changed to highlight a new take on life in Belfast as a “City of Soul.”

Grace and Goliath manage to be a light-hearted romp, and a romance with a meaningful message that family and connection are at the heart of what really matters.