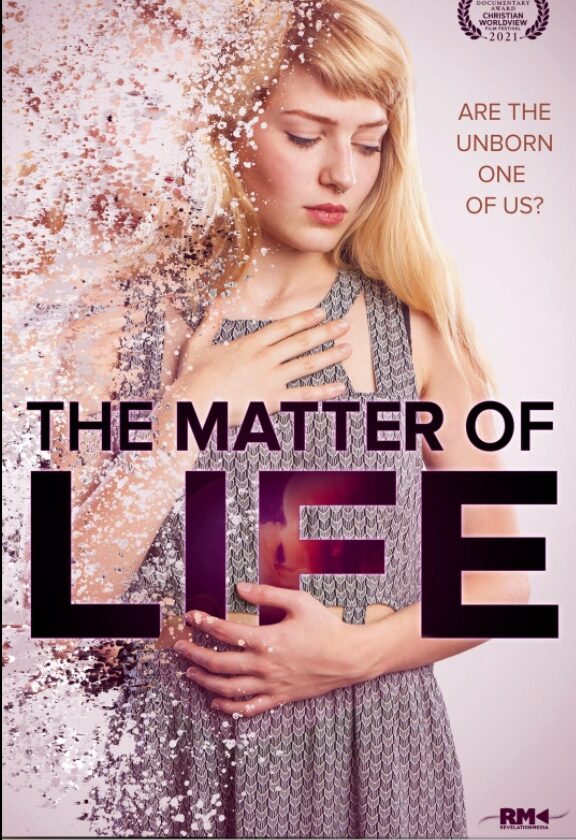 The Matter of Life

A journey to unravel the complexities of the abortion issue through science, philosophy, history and powerful personal stories. The film answers hard questions and provides hope for the future.

The Matter of Life is a jarring yet thoughtful documentary regarding the issue of abortion in the United States. With the help of experts, personal accounts, and plentiful visual aids, this documentary explores the political, spiritual, emotional, and physical aspects of abortion.

Abortion is a deeply complex topic for many people; it’s a discussion that is often wrought with emotion, and heated disagreement, and can often be an extremely divisive topic. It’s not an easy thing for anyone to discuss, but after watching The Matter of Life, you will certainly have a better grasp on the issue, regardless of what your initial view was going into it. Now, I will not mince words with you — The Matter of Life is a heart-wrenching and thorough tour of the history, practices, and perspectives, of abortion in the United States. There are incredibly graphic images and descriptions included within the film that are absolutely necessary. However, The Matter of Life is not just another “pro-choice” shock-and-awe tactic meant to shame people into thinking abortion is wrong. This is not a politically driven documentary; instead, its laurels rest on logic, philosophy, history, and lived experience. Drawing interviews from doctors, lawyers, pregnancy resource professionals and ministries, news clippings, and animated visual aids, this film masterfully dissects and addresses many common questions and arguments on both sides.

Utilizing fantastic production value and a gripping score, The Matter of Life strips away all the usual distractions and dives deep into every aspect of the issue at hand, including the real questions at the heart of the “pro-life” vs. “pro-choice” debate: what is the unborn? If it is human life, is that life less valuable than our own? While watching the film, you’ll hear powerful statistics, hear about the real science of embryonics, learn about the male-led push for abortion laws in the U.S., the history of planned parenthood, the anti-abortion roots of the feminist movement, and so many more facts that are incredibly eye-opening. Further, you’ll hear interviews from those with personal experience with abortion, including secular supporters of unborn life, that cut through common objections and arguments in support of abortion. Unlike many anti-abortion films, The Matter of Life takes a whole healing approach, emphasizing support for women, community, civil discussion, education, and peaceful action.

I will admit, I was a staunch “pro-lifer” for most of my life and had recently become a bit more “pro-choice”; my personal view is that while abortion is indeed murder (and therefore sin), I don’t have the right to take away someone’s free will to make the choice to sin. However, after watching The Matter of Life and learning the truth behind why so many women choose to end their pregnancies, and our biblical responsibility to prevent that, I can’t help but reach the same conclusion the film did — it’s imperative to create a world where abortion is not only unnecessary, but unthinkable. They say knowledge is power, and I can testify that The Matter of Life will equip you with newfound, powerful knowledge; knowledge that stirs and moves upon your heart and mind. Although it is a gruesome subject matter, the filmmakers have managed to create a film with a remarkable tone of dignity, gentleness, and respect. They’ve meticulously weaved this incredible resource together, and it’s something that needs to be seen far and wide in every circle.

The Matter of Life is a very heavy documentary containing graphic images, descriptions, and subject matter that is not suitable for small kids. Nevertheless, The Matter of Life is awarded the Dove Seal of Approval for Ages 12+, but it comes with a caveat: Even with that rating, you might seriously take into consideration the individual maturity level of tween and teen viewers before you share this film with them. Thankfully, there are trigger warnings before the most graphic of the images, so you can choose to look away, but there are still many images and illustrations that may be too much for some people. Further, I strongly encourage you to not stop the conversation when the credits roll, but to foster an open, direct, judgment-free conversation (especially with tween/teenage viewers) long after the documentary is over.

The Matter of Life is a jarring yet thoughtful documentary regarding the issue of abortion in the United States.

Overt faith message regarding the Christian responsibility to protect all human life.
5