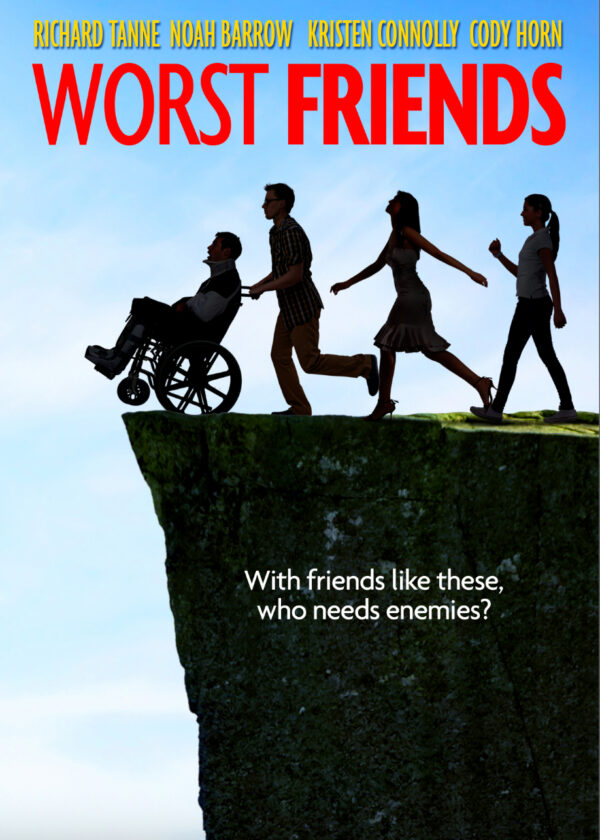 When mean-spirited Jake gets hit by a car, the only person around to take care of him is his childhood friend Sam. He agrees to help Jake recover but when Sam’s high school crush Zoe moves back to town, it’s every man for himself.

This little film Worst Friends is a dark comedy about two young “friends” now adults, who come together again under unorthodox circumstances after many years. With frequent flashbacks it quickly becomes apparent that Jake (Richard Tanne) was never a real friend to Sam (Noan Barrow), as he bullies him frequently, monopolizes situations, and appears to use Sam for his own ends. In fact, Jake is downright unkind, so it is a surprise when years later, Sam hears that Jake is back in town, recovering from a terrible accident. It is unclear why, but Sam decides to visit, and gets roped into caring for Jake, who is severely laid up and in a great deal of pain – Jake is rude and ungrateful from the get-go.

Sam has taken this gig because Jake’s father has agreed to pay him, unbeknownst to Jake, who is admittedly behaving as he always has, like a terrible person. Sam has committed to helping his mother financially, so he endures the ongoing abuse that has picked up right where it left off in high school. Sam easily falls into his familiar victim role, but when his high school crush Zoe (Kristen Connolly) appears on the scene, he is confronted with having to take a stand against Jake, who seeks to sabotage this potential union.

There is plenty of swearing, some bathroom humor, and a physical altercation with a character punched when Jake and Sam get into a fight, but the message of standing up for oneself in the face of a bully and about not letting the past dictate the present or the future prevails when even Jake himself tries to help Sam become a man.

This quirky little movie communicates how the best lessons can be learned from the Worst Friends.

Main characters strive at times to make ethical choices out of compassion.

“Jokes” of a sexual nature

One man in punched in a physical altercation.

Scene with man on toilet.