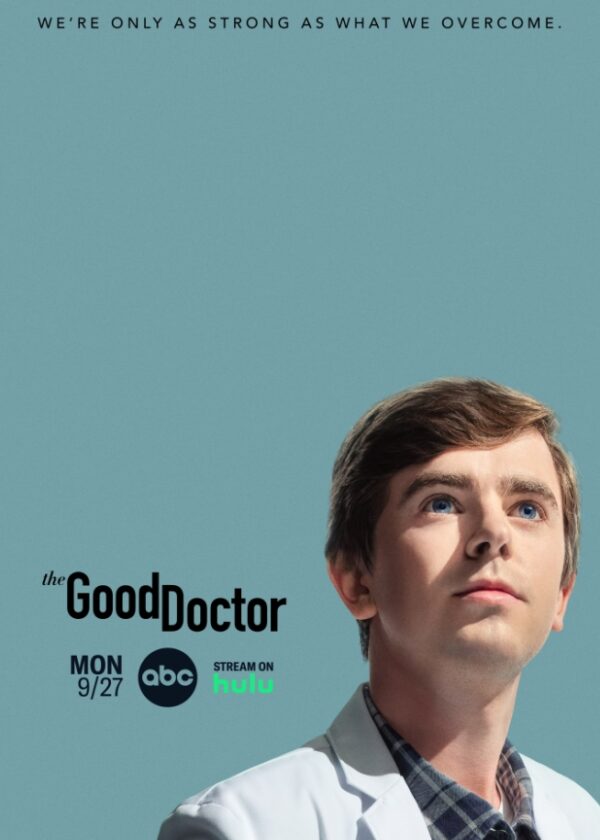 Shaun Murphy, a young surgeon with autism and Savant syndrome, is recruited into the surgical unit of a prestigious hospital.

This series is in its fifth season, and it continues to be a hit on ABC TV. In fact, it has been renewed for a sixth season, and will air in the fall of 2022 into the spring of 2023.

The series stars Freddie Highmore (Charlie and the Chocolate Factory, Neverland), as Dr. Shaun Murphy, an autistic surgeon and resident at San Jose St. Bonaventure Hospital, a fictional hospital. Highmore plays Murphy as quirky but dead-on in the intelligence department. Often, when confronted with a medical problem, he will hesitate for a few moments, thinking, and then will come up with a logical solution that no one else would have come up with.

As the series opens its fifth season, the first episode (titled New Beginnings), focuses on Shaun and his fiancé Lea (Paige Spara). They have returned from Guatemala, and they plan their engagement party, leading up to their big wedding day. The show gives us their wedding day, outside, complete with a storm with heavy rain and lightning. They are prepared as they open up their umbrellas, and they continue taking their vows as their guests also unfurl their umbrellas. Then lightning strikes a tree which horrifyingly begins to descend on the couple! Next, Lea wakes up and we learn it was all a nightmare. Shaun is lying next to her, and they are both safe.

The series features a few romantic stories, including that of Dr. Audrey Lim (Christina Chang), and Dr. Mateo Rendon Osma (Osvaldo Benavides). They also wake up next to one another, and Mateo must learn if some issues he has had in America have been ironed out. Will he and Audrey work side by side at the hospital?

Romance and sex are definitely a part of the episodes and series. For instance, Shaun notices the high spirits of a surgical assistant, and comments, “She’s in a good mood because she had sex.”

A character named Salen Morrison (Rachel Bay Jones) is off the wall, doing exercises while the doctors and nurses speak with her. She speaks of her “foamy urine” and it’s possible she has a cancerous mass in her kidney.

One of the strong points of the series is its memorable characters, which includes Dr. Aaron Glassman (Richard Schiff), who is grumpy, has been a doctor for many years, but knows his business. His wife Debbie just left him, and he misses her but doesn’t blame her for leaving. There are various complex life issues in the episodes which are explored.

Another subplot involves a woman who has cancer, and her son does too. She and her two boys are at the hospital when the boys’ uncle shows up. His sister is not in a welcoming mood. We learn that her brother, Nick, once watched the boys and took them to the beach. He got drunk and began talking to a woman, not noticing that the boys took off. Later the police found them about a mile away. She has never forgiven him for his negligence, but he wants to share with her that he recently earned a medal for going 90 days with drinking.

The series hits the dramatic bulls-eye target right between the eyes, although peppering a bit of humor into the stories every so often. One example is when Dr. Glassman finds some of the female dieticians to be attractive and decides it might be time for him to go on a diet!

The next episode, Piece of Cake, finds Salen Morrison missing, and it’s quite a surprise as to why when she shows up again and reveals a startling revelation. Also, Shaun starts trying out various pieces of cake to see what will become the popular choice for his and Lea’s wedding. In a comedic moment, Lea wants to vent but then Shaun mentions that everyone wants a different wedding cake. When Lea mentions he is venting he tells her that no, he’s not, he just wants to find a solution! Highmore does an excellent job in the role, smiling really big for a hospital photo, and complaining about the rough exterior of the new hospital gowns. Yet he is an intelligent and very good doctor and can spot solutions others miss. The autism occasionally enters in, such as when the paper towels are removed from a room and replaced with a high power air hand dryer. Shaun freaks out when the air, with its loud noise, kicks on.

Another interesting plot involves a woman who is about to have a baby. A police officer stays with her as the woman is accused of murdering her previous child and she was a prisoner. And soon after the woman breast feeds the child but then the child becomes sick. Did the woman use antifreeze to sicken the baby? What is discovered is a bit of a surprise and one of the episode’s shining moments. Another interesting plot involves a young African American athlete who is brought into the hospital, and she coughs up blood. What’s going on? Things become more complicated when her real mother, who had adopted her out when she was a very young child, shows up, hoping to reconcile with her.

The series features sexual situations outside of marriage, and some intense scenes, such as a woman who hemorrhages on a hospital surgical bed. Although outside of our Dove perimeters to have earned our Dove seal, viewers will have to decide if they wish to view this high-quality series or not.

This series features strong acting, and storylines, but does have a few content issues for family viewing as well.

There are various surgeons who work hard to keep their patients healthy and are quite honest about physical risks that they face; couples are honest with one another in their relationships; a mother gave up a child for adoption so she would have a better life.

A few couples are living together, although one couple is planning their wedding; kissing between a few couples and a couple of comments of how things were great the night before; a man has two dates at the same time, and they decide to move on to a night club and leave him behind; a surgeon says a woman is in a good mood because she had sex.

A woman is seen bleeding on a bed; blood is seen on surgeons’ hands; athlete coughs up blood.

A toast of champagne by various people; a party with people carrying and drinking alcohol; a double drink is ordered.

Mild cleavage; a man is shirtless as he lies in bed.

Tension between various characters; it’s unclear, for a time, whether or not a woman murdered her baby; a few cases of deception; tattoos seen on woman’s arm.