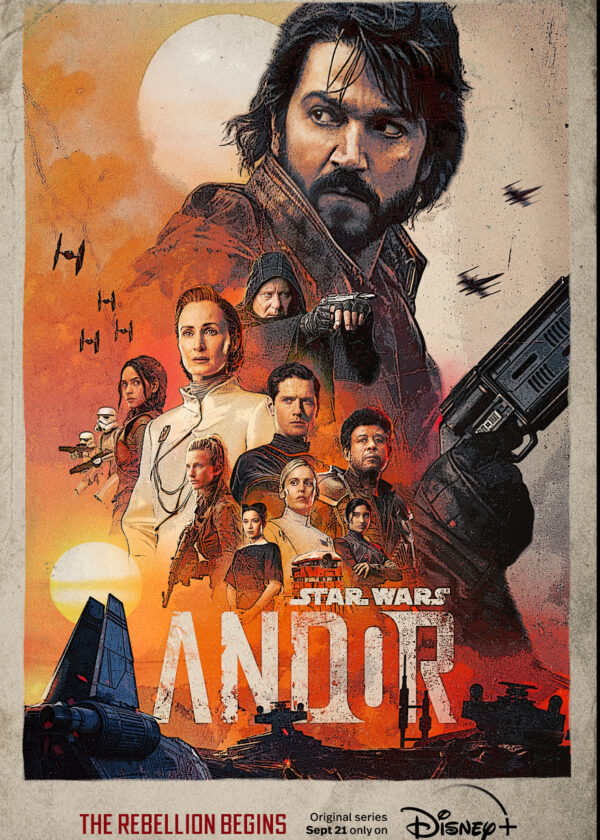 Prequel series to Star Wars’ ‘Rogue One.’ In an era filled with danger, deception and intrigue, Cassian will embark on the path that is destined to turn him into a Rebel hero.

Can a criminal become a hero? Are we doomed to our past? Through the first three episodes, Andor is a criminal against the Empire but is given an opportunity to have something more, a purpose and to fight for what is right.

Andor is a Star Wars streaming show on Disney+ and tells the backstory of a character from the movie Rogue One, Cassian Andor. Cassian isn’t yet part of the Rebellion, and it is 5 years before the Battle of Yavin, both referenced in Star Wars IV A New Hope and Rogue One. Cassian steals items to sell on the black market. However, our first look at Andor shows us his search for his lost sister.

The show continues to tell two different stories, back and forth from the time when Andor was a child and rescued from an accident on his planet and the “present” where Andor is recruited into the Rebellion. Andor has a friend, Bix, who is a mechanic and contact with the black market buyer. While searching for his sister, Andor has a run in with corporate cops in an alley and kills them to get away. The corporation investigates and hunts Andor down, and Cassian is trying to sell an expensive stolen item to have the money to escape.

Fans of the movie Rogue One will enjoy Andor. The show starts slow but has the same feel and dark vibe of the theatrical movie, which makes sense because Tony Gilroy is a main writer for both. We are introduced to new people and planets, refreshing in light of recent shows that concentrated on Tatooine. The corporate/mining aspect is interesting and give us a different feel than the normal Empire and Stormtroopers. There are a lot of new characters to keep up with, even confusing at times, but we will see how Andor becomes the person we see in Rogue One.

While there is little to be concerned about regarding specific content, this is a darker show than the normal Star Wars fare, and there are adult themes dealing with corporate oppression and the oppressed who deal with prostitution and police brutality. The relationships are more adult in the sense that they imply more affection and sexuality even though not shown on screen. The miners die from toxic gas, a tad more gruesome than some might expect for Star Wars. The redemptive arc for Andor, however, is a positive element.

Andor is a show with a redemptive arc of how a criminal finds a new lease in life through a greater cause, yet the more adult and complex themes might be a concern for some parents.

Andor is searching for his lost sister. Maarva saves young Andor at risk to herself.

Implications of prostitution and two people sleeping together.

Andor kills a corporate cop in the beginning, miners victims of an accident, and sci fi blaster/laser violence.

Implications of drinking, being drunk.

Andor begins as a criminal. The corporate cops are portrayed as brutal and abusive.