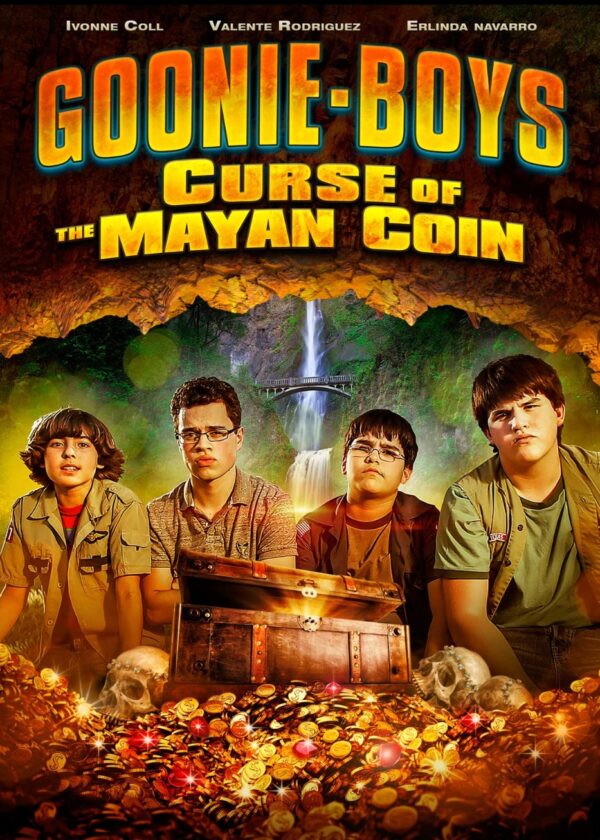 Goonie-Boys: Curse of the Mayan Coin

When four boys known as “The Scavengers” believe their hometown is cursed, they engage the locally rumored witch to help them be heroes, but the deal they strike could be life threatening, as they go on a treasure hunt for the mysterious Mayan artifact known as the  “Laughing Man.”

Goonie-Boys: Curse of the Mayan Coin is a fun adventure film where three, small-town, tween boys, who are best friends and call themselves “The Scavengers,” spend their free time hanging out in their lair, which is a run down abandoned house, and hunting for items the townsfolk have misplaced, from jewelry to pets, in exchange for payment. When Alex’s (Julian Ortiz) cousin arrives for a visit the team becomes four, and the boys set out to take on their biggest mission yet, all while avoiding the town bullies.

The Scavengers secure a job with a woman that everyone believes is a witch named Remedios (Ivonne Coll), who brings loads of mystery, intrigue, and a solid performance to the forefront. Alex wishes he could make the football team, but the town is believed to be under a curse, so he and the boys, with the help of Remedios, set out to free the town and win the big game they have been losing for ages under this curse, thereby, saving the coaches job, and creating a place for Alex on the team.

There are numerous obstacles to the boys’ goals, such as a treasure map in a different language; engaging another mystical woman for help to find the white owl, whom they need to obtain a feather from; the conjuring of faith that these steps will be effective; and the danger of the Mayan artifact itself. The greatest thing they must overcome, however, is selfishness, as they learn the value of doing for others, and what friendship really means.

There is one mild expletive, and a good deal of magic, as they chant spells in a foreign language, and believe that curses are effective to control circumstances. While some subtitles would have helped to understand the frequent Spanish lines spoken throughout, the messages that innocence can create a path to joy, and truth always blossoms, but lies kill, are powerful lessons that the boys take to heart and grow from, especially when one character puts himself in danger by taking an arrow in the chest to save another. This is a fun romp for kids, with some light-hearted comic relief to ease the suspense.

Goonie-Boys: Curse of the Mayan Coin, is a throwback to the original film where tween friends go on the adventure of a lifetime.

Boys learn about the value of honesty, friendship, and sacrifice for others.

One utterance of “Pi**ed off.”

One character is accidentally hit in the chest with an arrow, but is recovered in the next scene.

A few momentary, mild, bullying incidents; use of magic with spells being cast.