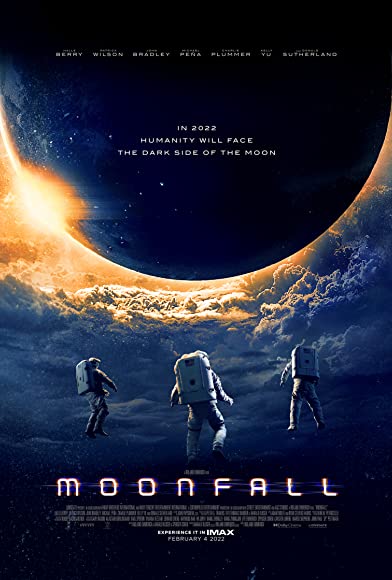 A mysterious force knocks the Moon from its orbit around Earth and sends it hurdling on a collision course with life as we know it.

Five weeks into this new year, when this film was released, and it is already evident that Moonfall may very well be dubbed one of the worst films of 2022. One wonders what the Academy Award-winning Halle Berry (Jocinda Fowler) was thinking to take on this project at such an advanced stage in her already successful career. It’s akin to taking leaps backwards, like the viewer is asked to do here, by overlooking anything we have learned about quantum physics in the last 100 years.

Though most of this would not be shocking for teenagers, caution should be taken with young children around the fact that this kind of catastrophe is not possible, along with appropriate censorship around the limited use of guns and one shoot-out scene. There is one language foible regarding a skewed version of the F word, and one man does sacrificially on screen with little drama surrounding the incident, that is, he appears to fall asleep.

Berry is surrounded by mostly sub-par acting where she herself leads the way, unenthused, to say the least, in a catastrophe film, nonetheless, where everyone should be on the verge of panic, almost all time. Granted, Jocinda is the head NASA executive/ex-astronaut, who needs to keep her cool under pressure, but she is entirely uninspired by all that is happening around her, which is, in fact, the moon crashing into earth!

In this convoluted narrative, we surmise that humans are created by aliens, who in turn created AI, that is now threatening to extinguish all organic life on earth, for ego reasons, no less – they cannot bear to be ruled by such inferior beings. Now an age-old trope, this storyline is flimsy at best, shamelessly showcasing science that isn’t even scientific. The idea is that the moon, now out of orbit, is hollow, and therein is the base camp for the intergalactic war taking place between the good and the bad aliens, whom we never do see. Technology abounds, but with limited special effects, when Berry and her misfit team finally enter the moon’s core after resurrecting the old spaceship Endeavor that is now a museum artifact, and taking off from a crumbling earth that is being ravaged by tidal waves and toppling Chrysler buildings within the first 15 minutes of the film.

Ultimately outfitted by the good aliens with an advanced spaceship, the disgraced, former commander Brian Harper (Patrick Wilson) somehow flies around the interior of the moon without a hitch, going to battle with the negative alien forces, who are wreaking havoc by way of their giant, slithering, dark mass of mechanical debris that often morphs into a hideous structure swallowing artifacts whole; of course the humans are the only ones who can kill it. Why are the more advanced good-guy aliens not able to do this alone? For all the destruction and the imminent threat of extermination throughout, not one person screams once! Most characters are just ho-hum about it all, never losing their cool, and always making just the right moves.

This is most evident when the film reaches ridiculous proportions with the sub-plot, where family members of the heroes are left on earth, running from bad guys with automatic weapons, who are trying to steal their oxygen masks. They are all distracted by this constant chase, while the moon is crashing into the earth before their eyes, exploding whole mountains, and gravity (only sometimes) takes a back seat. The one and only character who dies in this movie, does so because he gives his oxygen mask to his daughter and in turn cannot breathe. We wonder then, how anyone else on earth is breathing at this stage and not dropping dead – just one small way we must overlook the obvious to suspend disbelief that not even children would be capable of.

Though this content would not be shocking for most teenagers, caution should be taken with young children around the fact that this kind of catastrophe is not possible, along with appropriate censorship when it comes to the use of guns and one shoot-out scene where no one is harmed. There is a mild suggestion of suicide, and one incidence of swearing occurs by use of a skewed version of the F word. One man dies sacrificially, on screen with little drama surrounding the incident, that is, he appears to fall asleep.

John Bradley, who plays CK Houseman, a self-proported doctor with a PhD in “Mega-structures” is the only comic relief here, with a few quippy one-liners and comebacks to his life-long struggle as an outcast that no one takes seriously, while he rattles off scientific mumbo jumbo that only he understands. He, of course, saves the day. If only he could have saved this movie, and me the whole two hours it took to watch it.

Moonfall is only mildly entertaining; instead, leaving the viewer to contemplate its myriad of downfalls.

Sacrificial lead characters, who choose the survival of humanity over personal security.

Effing is used once in an outraged fashion.

Mass destruction of earth, people shoot directly at one another with automatic weapons, one person holds a gun on another, one scene alludes to an impending suicide attempt that never evolves, Alien mass enters human bodies as a  means of killing them on screen.