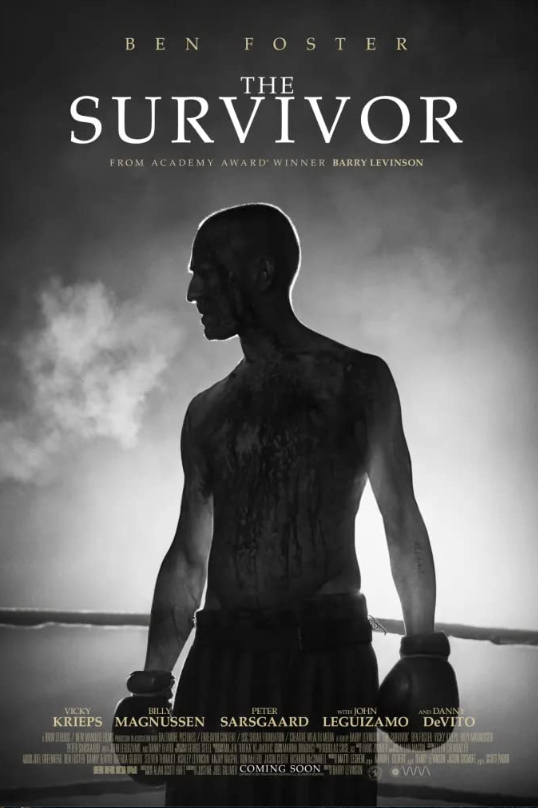 After World War II, Harry Haft is a boxer who fought against his peers in concentration camps. Haunted by memories, he tries to use fighting legends as a way to find his love.

It seems almost impossible for a generation raised on social media and watered-down history books to realize that, during World War II, millions of people not only died but were brutally tortured. Barry Levinson’s latest historical drama, the bare-knuckled The Survivor, doesn’t sugar coat the horrors of the Holocaust and the remarkable, fact-based story of the boxer who fought his way from gas chambers to sold-out arenas.

Ben Foster stars as Harry Haft, an idealistic Jew who stands up for what he believes, which eventually lands him in Auschwitz. The camp is muddy and magnificent, filled with mounds of dirt, rows of wire and lines of cabin spanning from here to eternity — it makes you wonder how anyone could survive such a place?

Henry is a tough guy, all grit and glares, but even he couldn’t survive without the help of a boxing program. Put on by soldiers in Eastern Germany, the Jews are thrown into a ring and made to fight like animals, that way the soldiers could have something to do after dusk. That’s where our story takes place — in a 20-foot ring — until the film leaves Germany for Harry’s post-WWII career, culminating in a match with Rocky Marciano.

The Survivor is concerned not just with the horrors of the Holocaust but the grit many prisoners embodied. In a spine-tingling sequence that pays homage to Ridley Scott’s Gladiator, Harry is given the chance to save a prisoner but murders him anyway. These moments haunt Harry, as he comes to terms with what he did and who he killed. He comes to accept that he was living a “life or death” scenario — either he dies, or he lives to see another day. It’s not an easy watch, but a painfully necessary one. Dove 18+ approved.

This is the story of a man who grapples with his faith after the Holocaust. All the big questions about God are presented, argued and dissected along the way.

This is the story of a man who grapples with his faith after the Holocaust. All the big questions about God are presented, argued and dissected along the way.

The film does not hold back on violence. Boxing matches and executions are graphic.