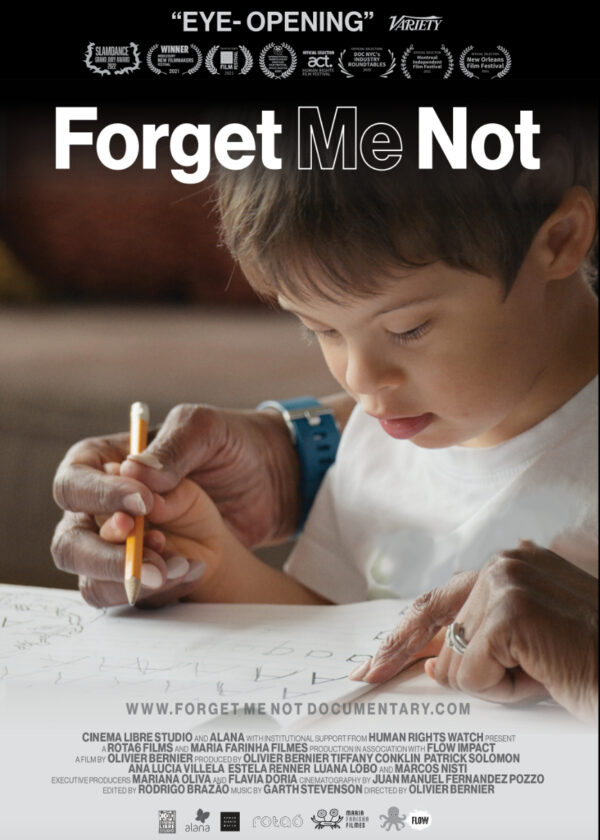 As 3-year-old Emilio is ready to start school, his family finds itself cornered in the United States’ most segregated education system — New York City public schools. Fighting for their son’s right to an inclusive education – where Emilio and other children with disabilities would be taught alongside their classmates without disabilities – film director Olivier and his wife Hilda investigate the personal stories of students and their parents in the US. With children with disabilities worldwide less likely to attend school, these experiences expose just a handful of the widespread injustices currently taking place in the educational system and beyond for kids with disabilities. Forget Me Not reveals a path to a more inclusive society that starts with welcoming diversity in the classroom.

Forget Me Not is a highly acclaimed documentary that showcases one family in particular, as they struggle against the discriminatory history of the New York City public school system in an effort to have their young son with Down Syndrome be included in a regular classroom setting, and not segregated from normal society. This project sets out to educate the viewer about the negative effects of segregation in general with a focus, on the opposition to and the positive outcomes of inclusion in the educational system at large, and the need to fight for the human rights of children with disabilities to be taught alongside classmates who are not disabled.

The film begins with the frightening, live-footage, portrayal of Geraldo Rivera’s expose on a local New York school called Willowbrook, since shut down, and its treatment of intellectually challenged children; the visuals are not for the faint of heart, and there are short scenes of a naked pregnant woman, who later gives birth, albeit the live birth itself is concealed by the camera angle. This could be an opportunity for mature teens and families to address complex societal issues. In true documentary form, the movie captures the moment this young couple discovers their son Emilio has Down Syndrome, and the emotional rollercoaster of acceptance and perseverance in the face of all odds.

Hilda Bernier, Emilio’s mother is dedicated, resolute, protective, and at times heartbroken over the struggle to ensure that Emilio, and by extension all children, have the right to access all of the opportunities and privileges that normal children have. Olivier Bernier is equally impressive as a strong and undyingly supportive husband and father, and together they investigate the personal stories of other students and their parents, who are also on this journey; visit inclusive school models; consult with a professional advocate; and push back against a system with a long reputation for exclusion. The viewer is rooting for their victory to the very end.

There is plenty of political and humanitarian discussion around inclusion for all minorities, but the portrayal of how disabled children can thrive in a community that supports their strengths and helps manage weaknesses, without separating them from the masses, is inspiring. Statistics are showcased and supportive teachers model what can be done at Boston’s Henderson School of Inclusion in a way that would make the hardest of hearts melt to see children and adults of all abilities thriving together. No less, it is the heartwarming and at times heartbreaking dedication of the Berniers themselves that drive this film, even as they lose some important battles. And it is the viewer’s privilege to have an inside lens into the personal experiences and day to day struggles of parents who only see beauty and accomplishment in their children.

Forget Me Not highlights the injustices of a powerful system that seeks to wield ultimate control in a situation that should be collaborative. With disabled children worldwide less likely to attend school, these experiences expose a handful of the widespread injustices currently taking place in the educational system and beyond for kids with disabilities.

Forget Me Not reveals a path to a more inclusive society that starts with welcoming diversity into the classroom.

Self-sacrificing adults advocate for the rights of disabled children

Naked side shot of a pregnant woman.