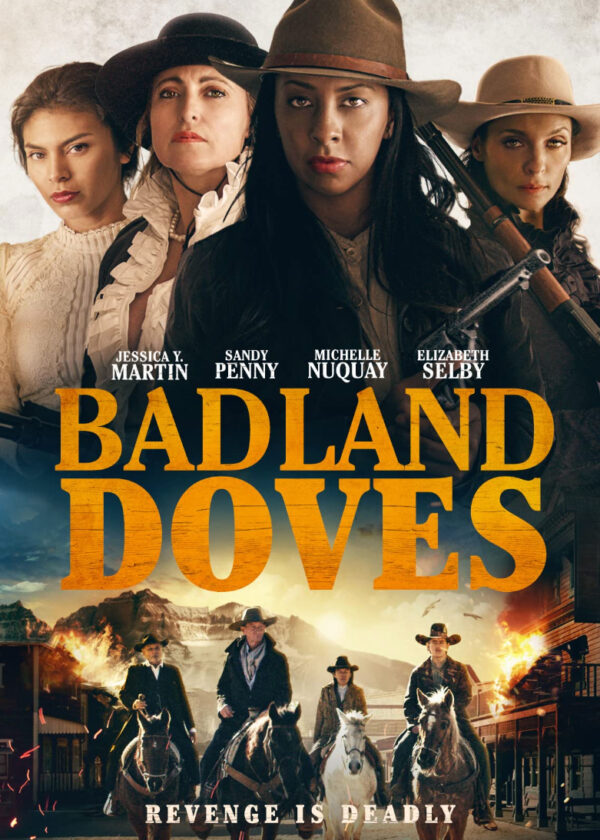 On the trail to seek justice for murders by a man the entire town is protecting, these girls are out for revenge and they’re up to the fight.

This violent movie shows that the women characters in this film, harlots, can hold their own against the men who have wronged them. Starring Jessica Y. Martin as Regina Silva, and Sandy Penny as Victoria Bonham, the characters navigate their way through dealing with a murderer named Pete Chalmers (Daniel Johnston), and his daddy who runs the town (played by Manny Greenfield).

The story begins with Regina witnessing the murder of her family, only to learn later it was Pete Chalmers who committed the crimes. This happened during a birthday party for her papa. And in another scene, a prostitute is murdered and the madame of the business, Victoria, and her daughter, Sarah, mourn. One of the clues left behind on the blood-soaked bedsheet, is a spur. If the spur can be matched up with the cowboy who did it, then he can be brought to justice.

It should be noted that the music is nicely done in the film, the score having been written by Sam Mizell. It varies from moody to dramatic and suspenseful. We get an idea of what’s to come when Regina, sickened by her family’s violent deaths, asks an expert gunman to train her. “I want you to teach me to kill,” she says. “He killed my whole family.” “Revenge,” the man replies. “Why don’t you just go about your life? God spared you.” “I don’t think so,” she responds. Her teacher, Tom Black (John Marrs) tells Regina, “Be quick or be dead.”

Right from the start, when she arrives in town, Regina stands up to a cowboy who draws on her first, and she shoots him in the head! One of the few but positive elements of this film is that blood is seen very little or not at all. Down the street a man named Johnny Brown (Jimmy Cochran) asks Regina what the commotion was all about down the street. “Somebody got shot,” she replies without emotion. When she asks Johnny where the local saloon is, he tells her, “It’s not a place for a lady.” “I assure you,” she replies, “I’m not a lady.” Someone recognizes her when she enters the bar as the lady who is “as fast as lightning.”

Soon after arriving in town, Regina lands employment as a prostitute in Victoria’s house of ill repute. When Victoria asks if she is as good with this line of work as she is with a gun, she replies, “Better.” Victoria replies, rather humorously, “Just don’t shoot the customers!” One of the negative issues in this film, from Dove’s point of view, is that the prostitution is handled very much like a routine job, and the girls have each other’s backs. It should be noted as well that many of the local men stop by. Very few, if any, repercussions from this line of “work” is dramatized.

There are many instances of violence too, such as when Pete Chalmers’ father slaps him several times for having lost his spur when he was with the prostitute whom he murdered. Pete replies, “I’m sorry. I was drunk.”

One nice moment occurs in the film when a deceased person is prayed over, and the hope of eternal life is mentioned. The hope is that the deceased is with God, and the Son, and the Holy Spirit “forever and ever, Amen.”

The film heads toward a climax with the determination of the girls to capture Pete Chalmers for the death of the woman prostitute, and to stop Pete’s father, who is trying to use the bank to claim Victoria’s building and to take it away from her.

The movie does a good job in showing what the misuse of alcohol can do, and it’s even mentioned by the guilty man, Pete, himself. But there is also the use of strong language in the film, along with drinking, and the harlots becoming the heroes of the story. It has fallen short of earning our Dove seal.

Although the movie shows the downward slope of drinking, it also is not a family-friendly film and contains several issues such as prostitution, profanities, and violence.

The Lord and Trinity are mentioned in a prayer for the deceased.

A woman shows forgiveness to a woman who didn’t treat her well in the beginning of their acquaintance; a woman honors the memory of her deceased family.

Women are harlots and have men frequent their establishment.

Several people are shot and wounded and killed; blood seen on the bed of a woman who was shot and killed; a man repeatedly slaps his son, although he is a young man.

Cigar smoking; Drinking with strong alcohol seen in a saloon.

Strong cleavage in a few scenes.

Prostitution and the prostitutes are portrayed as the good characters; death and grief; tension between characters.