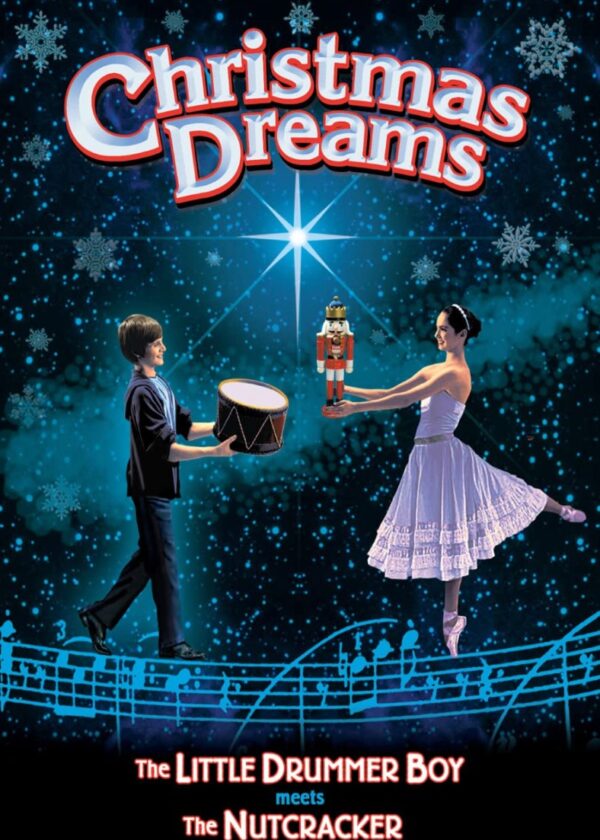 This movie is a delightful step into the world of Christmas, with its subtitle being “The Little Drummer Boy meets the Nutcracker.” David (Conrad Sager), a drummer, likes Clara (Francesca Flamminio), a ballet dancer, who likes him as well. However, her brother Fritz (Daniel Venini) and his gang of brats could spoil it. They bombard the locals, including David and Clara, with snowballs.

Both David and Clara have dreams, which will showcase various beautiful snow scenes as well as characters, both good and bad. Merlin, the narrator, who has a great voice, is also a magical toy maker, who leads the viewer into this magical land of Christmas escape, and-at times-a bit of danger.

The film is rich in its visuals, showing beautiful scenic snow scenes, as well as a ballet dancer dancing in the clouds. And there is plenty of dancing, with well-choreographed dances ranging from slow dances to high-energy and fast-moving dances.

The movie does a nice job in showing the changes and growth a person can undergo. For example, in an early scene in the film, David’s dad is upset with David playing with his drum, and he gives him a light shove and breaks his drum. Yet later he gives him a wonderful Christmas gift and it is obvious he loves his son. This poor family is portrayed as being rich in their relationships.

The characters are memorable as well. There is a trio of musicians-a flute player, a trumpet player, and a guitar player. David attempts to play the guitar but, as the narrator notes, his sound of strings made everyone cringe. David’s try at the trumpet makes everyone groan. And his attempt at the flute is the worst! But David sure can beat a mean drum!

One of the special effects moments includes a scene of David watching a man hold a dancing ballerina in his hand. The scene of the dancer in the clouds is quite impressive, as is a scene of David and Clara dancing in miniature, dancing on top of a music box. This is truly a magical land of Christmas dreams.

Yet, the story of the gospels and the true meaning of Christmas is not forgotten. We see the scene of the shepherds and a donkey, and David, at the tiny manger in Bethlehem. And we see the Christ child, lying in the manger. The child is quite happy. In addition, several Christmas songs are performed, including God rest ye merry gentlemen, We three kings of orient are, Hark the herald angels sing, Joy to the world and, Away in a manger.

Some of the other fantastical moments include a giant lion (it looks like a giant puppet and is not scary) which Clara takes to and makes friends with. She even rides atop the giant beastie. And a snake dancer, which features a female dancer who slithers and moves like a snake in her dance. The Gingerbread people are also amusing and, when first seen, the viewer will have to decide whether to be a bit wary of them or if taking a bite out of them is a good idea! They dwell in a wonderful world of candy. Another memorable scene involves pink sugar falling from the sky and a sugar plumb fairy arriving to dance. And the blending of animation and live-action sequences is truly remarkable. Music from the Nutcracker is nicely performed. And the viewer will not forget a robot dance by three energetic robots. They are truly live wires!

The musical number while shoppers shop is terrific, and the bloopers at the end while the credits roll are funny.

This is truly a remarkable movie, with its message of love and of Christmas, set in a fantastic world of imagination, dancing, and unforgettable characters. It has earned our Dove seal for All Ages.

This movie features heroes and a few villains, but is mainly an imaginative celebration in dance, celebrating love and Christmas.

Christmas songs are sung and a scene of the manger in Bethlehem with the Christ child is re-enacted.

Good characters who love Christmas and we see various characters help one another, snatching them out of scary situations; a father gives his son a special Christmas gift that he knows he will like, after previously breaking his drum.

A father gives his son a slight shove and breaks his drum, but later shows he really loves his son; various pranks are done by Clara’s brother and his “brat” gang, but nothing is very scary; people are hit with snowballs, but no one is hurt; Clara throws a shoe at an annoying character.

A beach scene in which boys dance in shorts and are shirtless, and girls dance in swimwear, some showing bare midriffs.