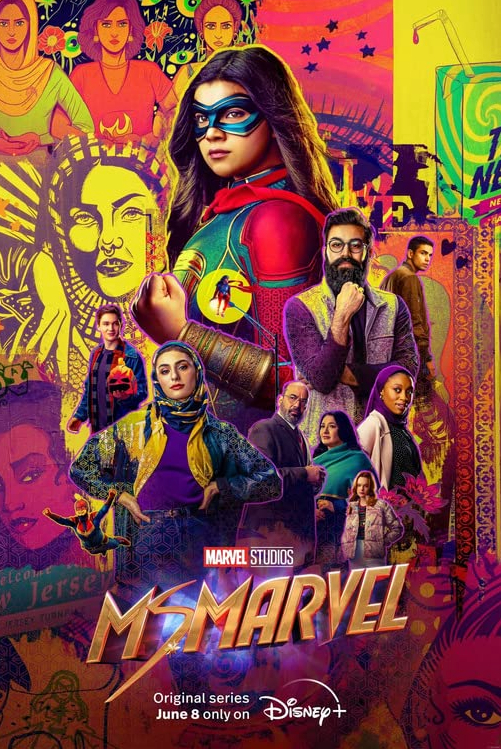 Kamala is a superhero fan with an imagination, particularly when it comes to Captain Marvel; Kamala feels like she doesn’t fit in at school and sometimes even at home, that is until she gets superpowers like the heroes she’s looked up to.

What happens when our dreams come true? We set our hope and expectations on our dreams, like they will solve all our problems, but often realizing those dreams can cause even more issues. Kamala is a teen juggling conflict with her parents, her religious beliefs, and her social position at school, and then she develops superpowers.

Ms. Marvel is a character from the comics, and Disney+ brought this teen superhero into the MCU through the new streaming series. Teen Kamala is inspired by heroes like Captain Marvel and the Avengers, and she constantly imagines what it would be like to be a super hero, especially like Captain Marvel. Kamala’s family is from Pakistan and Muslim, so her family culture is a big part of the backdrop of the story.

Through the first two episodes, Kamala’s family gets a box of various items from distant family. Among those items is a bracelet that Kamala uses in cosplay conference, and of course this item gives her superpowers. Her friend Bruno is the only one who knows, and he helps her to develop and figure out the superpowers while she hides them and boys and dating from her parents. Kamala quickly realizes that being a superhero isn’t all she thought it would be.

Fans of Ms. Marvel from the comics will notice some differences in Kamala’s powers – in the Marvel comics, she can get bigger and stretch her body in interesting ways. The powers in the Disney+ show are more “hard light” powers that she can manipulate. The style of the show is phenomenal, showing us her imagination with a modern and fun design. Iman Vellani does a great job with the character, and kids will love the show. The series is intentional with portraying the Pakistani culture with positivity but realism, as well, which gives Ms. Marvel a unique aspect.

Since the series is attempting to appeal to a more Muslim and teen crowd, questionable content is minimal. It earns our All-Ages approval. There are romance and teen crush elements but are handed fairly innocently (cute boy in swim trunks), and even when showing girls in the gym locker room, the females are covered with towels, etc. Kamala takes a sip of alcohol at a party and doesn’t seem to like it.

Ms. Marvel is a cute, innocent, fun new show great for teens and Marvel fans with minimal content issues and a nice conflict about what it means to realize dreams, be honest with yourself and others, and be a hero.

Family is Muslim and people pray and one scene takes place in a service at a mosque.

Kamala finds powers and must learn how to be a hero. During conflict with her parents, she is asked what type of person she wants to be, and her choices will determine that.

Kamala takes a sip of alcohol at a party.