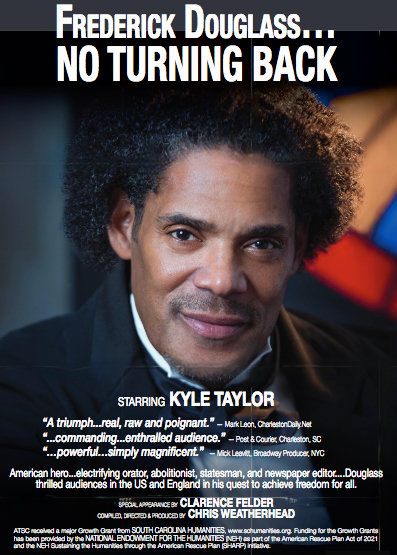 Frederick Douglass: No Turning Back

The life of former slave, turned writer and politician, Frederick Douglass, is examined in this powerful short drama. Starring Kyle Taylor as Douglass, he speaks from a podium and highlights the events of his life, including living through the hardships of slavery, and being a force in enacting new anti-slavery policies.

This powerful and gripping drama highlights events in the life of Frederick Douglass, including his difficult years of being a slave, and his eventual freedom. Key events in his life such as when he was finally free, how he married a woman named Anna, and traveled to England are highlighted.

Kyle Taylor gives a tour de force in his performance in this film, spouting out line after line of dialogue as he speaks passionately, thoughtfully, and with wisdom to an unseen audience.

First introduced by Pastor Brewster (Clarence Felder), Brewster expounds on the unique individual he is about to introduce, as he states, “My friend, Mr. Douglass, escaped the horrors of slavery in 1838, some 34 years ago as a 20-year-old man.” He further gives tidbits about his friend’s life, including his journey to England, where he was declared free from slavery, and how he was able to return to America as a liberated man. Brewster also enlightens the audience (and us) by stating that Douglass published and edited his own newspaper, the North Star, for many years. Then, in Washington, he published The New Era, with his sons. Douglass also wrote two books and was appointed Secretary to a commission to Santo Domingo.

Douglass also had audiences with several U.S. presidents, and he contributed to the Emancipation Proclamation, with great effect, along with President Abraham Lincoln. His two sons, Lewis, and Charles, fought in the Massachusetts 54th Regiment, and his other son, Frederick, was highly involved in recruiting.

Douglass knew the cruelties of slavery, and it’s said he clung to Almighty God in sorrow, believing he would eventually have joy. After the pastor introduces Douglass, he speaks, telling of his birth in Maryland in 1817. He says he knew that the taller he grew, the shorter his stay would be in the only home he knew.

Douglass reads from Psalm 23, explaining the ways in which his life mirrored this famous psalm. He says it’s a kind of road map for him, and he speaks of its boundless truth and courage. He shares a gripping story of how his master’s wife began teaching him to read, but how his master forbade her to continue. Fortunately, he had learned enough and found a way to continue to learn. He also speaks of the final flogging he received, and how he stood up to his former “master.”

The theme of the evils of slavery, the need for freedom, and for all people to be treated equally, are strong points that are aptly portrayed in this film. Douglass also warns about the evil of hypocrisy.

There are powerful elements to think about and discuss, such as what is evil about slavery, how one can do good with freedom, and the importance of human brotherhood, despite differences.

This powerful film opens discussion opportunities for families about how all people are created equal. This movie has earned the Dove Seal for Ages 12+ but some parents might consider younger kids watching. The rating is based on the mature theme of beatings, slavery, hypocrisy, and some young slaves being looked upon as sex objects. But the theme of securing liberty and freedom are worthy themes.

Strong examples of faith including the reading of Psalm 23, and Douglass’ comment that he followed God, backslid, but came back to God. A pastor speaks briefly, introducing Douglass. Comment about taking communion.

Examples are given of a few white people who treated the blacks fairly and as equals, including a slave master’s wife. Douglass was treated fairly in Massachusetts where slavery was not an issue, and blacks and whites attended school together.

Comments about how some girls were made to dress scantily and their dignity and virtue were lost; how some men lusted.

The “damned” are mentioned.

Comments about beatings and floggings and cruelty by slave owners.

The comment that some girls were forced to dress scantily.

The hypocrisy of some; the hardships of slavery; the tension that resulted from slavery.