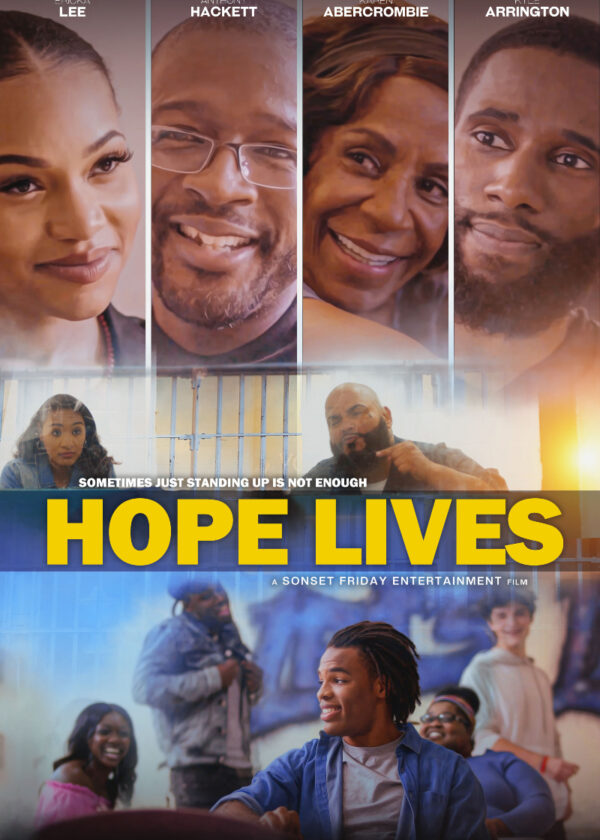 Six high school students who are all victims of bullying join an after-school program for bullying victims, led by a man who recently experienced a tragedy due to an act of bullying. The stories of everyone involved with this after-school bullying program, including the counselor, begin to unfold and intertwine into a brilliant mix of drama, triumph, comedy, and inspiration.

Hope Lives is one of the most impactful, tasteful, and relatable Christian films I have seen to date. When Peter Ryan (Anthony Hackett) experiences a tragic loss, he moves out of state to begin anew, and finds himself facilitating a group of teens who are bullied at their school. Watching these kids grow stronger, transform, and begin to shine is a powerfully emotional experience for both the character and viewers alike — the superb acting and direction has us hungering for the next scene.

The group consists of the popular, social media star, who is posting questionable content and getting teased for it, the cool guy who sent a provocative picture to his girlfriend that she released to the whole school out of revenge (a finger gesture is made throughout to bully him that is suggestive of private body parts), an overweight girl played by the incredibly talented Nicole Paris, a boy who is picked on for being white and quiet, a mean girl, a brainy kid, and a few others. The questionable content noted above should be monitored for younger viewers. There are also a few incidents of violence in the form of slapping, mild punching, and two deaths, one on screen when a young girl hits her head while being bullied, and the other is an accident that mostly occurs off-screen. There is also mild but persistent bullying throughout.

However, the narrative itself is so redemptive in nature that most of the above content serves to display the trying circumstances the teens are dealing with. As they sit in a room together every day after school in a discussion format led by Peter, they learn to have compassion for one another, and to overcome fear of their perpetrators by displaying confidence and having hope. This latter message skillfully weaves through the plot, serving as a motto the teens can hold onto as they navigate the challenges of high school.

I was brought to tears on several occasions as a result of heartfelt performances, and was engaged throughout, assisted by superior direction and editing that enhanced the storyline and portrayed the actors in their best light. Both Hackett and Karen Abercrombie (Peter’s mother) are a pleasure to watch, as well as the teens themselves, who are believable and emotive, and the plot line had unexpected and clever shifts throughout.

With tasteful references to scripture and prayer, and an overall redemptive theme, the viewer learns, right along with Peter and his students, how the message of hope can help heal and inspire people to move past pain and grief into a life of freedom.

A powerful emotional experience for both character and viewer alike.

In addition to all the executive producers listed in the credits, the filmmaker credits God first and foremost as Executive Producer. We thought that merited crediting apart from the human.

Girl falls, hits head, and dies after being pushed by bully, one car accident with off-screen death, isolated incidents of slapping and punching; bullying occurs.