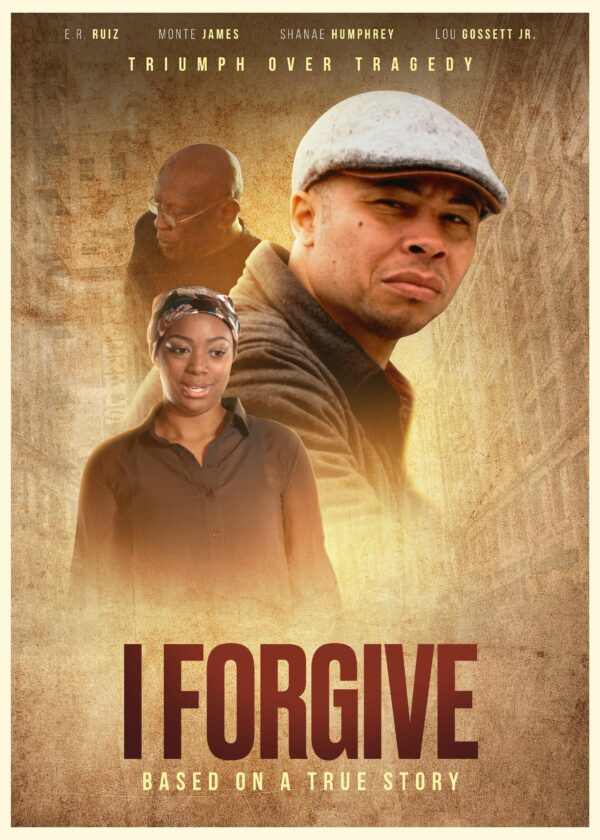 Shot five times by a Los Angeles gang, leaving 10 bullet holes through his body, Tony dies for 30 minutes and has an out-of-body experience. He talks with God and makes a choice to forgive.

I Forgive is a well-intentioned and well-thought out narrative about gang violence in America. Situated in Los Angeles, a hub for broken homes and poverty, that perpetuates this violent dysfunction in the local communities, this film attempts to address the underlying issues, and posits a way to begin to heal and recover, through natural and spiritual means.

I Forgive opens with a gang related shooting, where guns are exposed and blood is evident, so caution should be taken with younger children viewers. The victim, Tony Davis (Monte James) is in the process of dying, when we cut to “earlier that day,” as a way of building backstory. Here we witness a godly family man, who is serving his community in the most desperate, crime-ridden area of LA. Involved in ministry as a musician, he also mentors youth, and ends up in the wrong place at the wrong time of a gang initiation. Hospitalized and fighting for his life, he visits with God (Louis Gossett Jr.), who ensures him of his purpose to love, nurture, and heal his community going forward, before miraculously healing him and restoring his life.

While this film has some narrative slights (what happens to the troubled young man that the beginning of the film spent so much time on?), and editing challenges (cutting away constantly from news clips, to hospital scenes, to heavenly encounters, and back again), there were some very nice choices made as well. Throughout, the narrative cuts away to Pastor Smith (Alton Beech, a pastor from Great Anointing Harvest Church in Boston, MA., who, as is reformed convicted drug dealer). He is interviewed by Regina Ramirez (Mary Walden) throughout, and scenes continually cut away to this candid one-to-one where Ramirez is portrayed as mildly condescending, not grasping the integral issues underlying the gang violence in LA; she is unsympathetic, posing an exploitative, trite, and oversimplified vision of the issues. This provides Pastor Smith with an opportunity to share what he sees are the difficulties for the troubled youth in these communities, who are recruited into gangs: fatherless homes, fear, lack of support and purpose; as well as some solutions: community engagement, love, finances, and sacrifice, all in a disarming manner. These moments are a clever and effective way of addressing real life issues, and Beech is approachable and convincing.

I Forgive leaned into being a bit preachy at times, although they did practice “showing” this more, and not “telling” as much; however, the scenes with God in the garden as Tony hovers in a purgatory type environment, while in a coma, are somewhat unrealistic from a narrative standpoint: God “explains” much to him, and tells Tony he is sending him back to continue his mission because Tony “is a faithful worker for God,” therefore, he will heal him. This could be slightly troubling for some, since the situation at the hospital, while Tony is comatose, is dire: he is going to lose a leg and may never speak again to an injury to the throat. Here, then, is where the viewer might take issue with the fact that Tony is being healed because he “has enough faith” and is a “good worker for God.” Does this leave other believers and non-believers alike questioning whether they have “enough” faith to be healed – whether they have “done enough” to please God?

Aside from this, much of the acting therein is strong, especially by Tony’s wife Chris (Shanae Humphrey), who manages her fear and other challenges through her faith in her husband’s leadership, and God with realistic humility and candor. Surprisingly, we never do see Tony “forgive” his perpetrator, but as a homeless man (seemingly an angel) posits at the end of the film: forgiveness was for him personally, the mission, going forward, is his message.

A thoughtful and compassionate view of the causes, perils, and solutions around gang violence

Narrative posits spiritual and natural causes for current conditions and suggests the solution is reformation through submission to Jesus, and loving and serving others

Husband and wife kissing, one kiss between a neighborhood gang girl and a teenage recruit