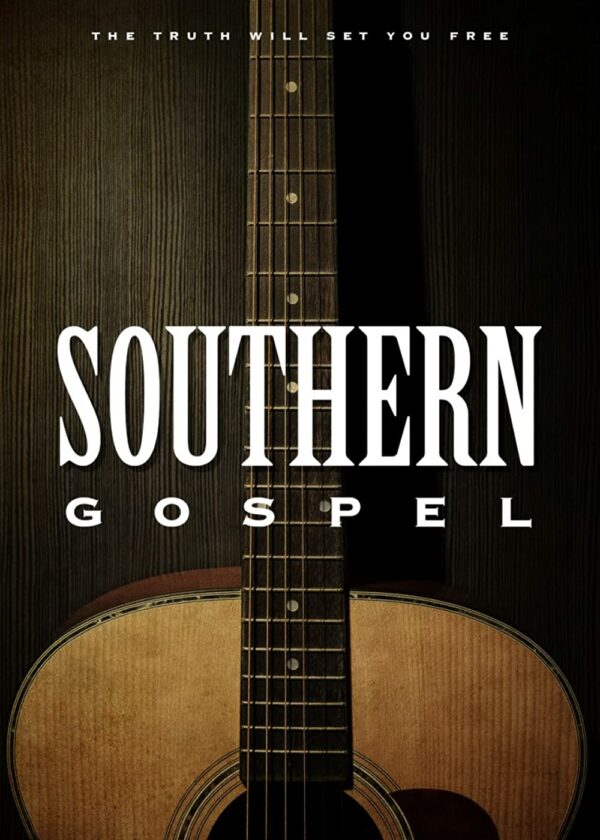 When a rock n roll star’s life comes crashing down, he must fight his past demons to realize his childhood ambition of becoming a preacher.

Southern Gospel is about a talented young man, both musically and orally, who loves the Lord but faces severe testing and trials before making a final decision as to his future. Will he answer the call to preach and to worship the Lord with his musical talent?

At the beginning of the movie the story takes place in the sixties. Samuel Allen (played by Max Ehrich, with Beau Hart playing young Sam), loves music and his dad, Pastor Joe Allen (Gary Weeks), is strict yet loving. In one early scene they are together in their truck, with Sam’s dad driving. Joe gets on Sam for overlooking chores and says his behavior has “been off” in the classroom. He tells him he will have to ground him for another week if things don’t improve. “I was a preacher’s kid, too,” he tells Sam. But then, we see he has a side of him that can relate to the young boy. He takes his curled-up finger and tells Sam if he doesn’t listen, he will have to talk to his “friend”, which is “Gary the goose” finger, and he promptly tickles Sam!

The difficulties of ministry are portrayed like when Pastor Joe pulls into the church parking lot and someone has parked in his “Reserved for Pastor” spot. And legalistic attitudes and the danger of living apart from God’s grace are also relevant themes in the movie. In the classroom, young Sam asks his teacher, “What if you cussed once and you didn’t really mean it?” His old teacher replies, “You’d bust Hell wide open!”

There are those in the church who are against makeup, worldly music, and going to picture shows (movies). Yet Pastor Joe preaches a balanced message of following God’s rules but relying on His grace. He preaches a sermon about following the rules on the outside but doing something different on the inside. He says someone in the church wouldn’t get drunk on whiskey but might be drunk with their own pride. He uses the example of someone who wouldn’t light up a cigarette, but their heart is burning with jealousy.  “God looks on the heart,” he reminds the congregation. And, he adds, “God can always spot a fake!” In a funny scene, as his dad preaches, Sam is off to the side, unseen, and he imitates his dad as Pastor Joe says, “Where religion fails, and people fail…God will never fail!”

The extreme attitudes come up every so often, such as when a man complains to the pastor that another man had allowed his whole family to go swimming, and that “mixed swimming encourages lust!”

Justice Leak plays T.L. Whittmore, the church overseer, and he seems to constantly find fault with Pastor Joe. Young Sam sees Whittmore’s legalistic attitude and says that one day “I’ll start my own church.” He intends to follow in his father’s footsteps and to preach the gospel and to worship the Lord with his talent for music. In a touching scene, young Sam admits to feeling that his mother’s death was his fault. Joe assures him that it’s not true, and that Sam’s mother had complications following Sam’s birth.

In one big meeting, Sam performs a song and a teen girl named Julie, watching him, tells a friend that she is going to marry Sam someday. Julie’s dad is abusive and later when he learns Julie went swimming, he slaps her and causes her nose to bleed. It is also sadly revealed that her father sexually abused her when she was little.

Sam’s upbeat and sometimes jazzy music isn’t always popular with church groups, and eventually he begins playing secular music or “worldly” music with a band. He and his bandmates are traveling in their car following a concert and the driver is drinking and smoking. He falls asleep at the wheel and a tragic accident occurs, claiming the life of the driver, and injuring another passenger. Sam is safely thrown from the vehicle. Sam realizes it is a wake-up call and he begins to seek the Lord again, even winning his friend and fellow singer, Barry, to the Lord.

The drugs in the vehicle were burned up but Sam’s reputation is harmed, and his father considers stepping down as pastor because of the incident. Sam has reached a turning point and wants to change and truly follow the Lord. He doesn’t know if he has the strength to do it, but his dad assures him that he does, and then Joe baptizes his son in the river. Sam gives a testimony in church, reminding everyone that nothing can separate you from the love of God in Christ Jesus. Sam’s father steps down and soon, after hearing him speak and sing at church, Whittmore’s father, the superintendent of the organization, places Sam in as pastor. Whittmore is not happy about this.

The music is remarkable in the film, including a great rendition of I Surrender All by Sam. Sam and Julie are married and the attendance begins to skyrocket in the church, mainly due to Sam’s preaching on grace and the terrific music. But Whittmore plots to get Sam removed. Will his plan work? If so, what happens to Sam and Julie and their new family of two kids?

There are relevant points to think about in the film, including the balance of following the Lord but relying on His grace, of making mistakes but getting second chances. The movie has earned our Dove Seal for Ages 12+.

The Dove Take: This film encourages families to have open discussions about living for the Lord and what to do when failures occur.

A strong message of faith and of grace, with some Bible verses being quoted.

A father is loyal to his son, and he shows him forgiveness and grace and looks out for him; a man forgives another man who wronged him.

Kissing by a couple; a man calls a prostitute to his hotel room but then changes his mind; past sexual abuse is revealed.

A car accident, due to a man driving drunk, which results in a man, the driver, burning to death (part of this is shown); a man is thrown from a vehicle; a man is seen with scars on his arm; a confrontation between an officer and a man.

Wine, beer, and strong alcohol are consumed; smoking; a comment about pills and reefer; a man drives while intoxicated.

Tension and arguments between characters; a man sets up a pastor to fail; betrayal.