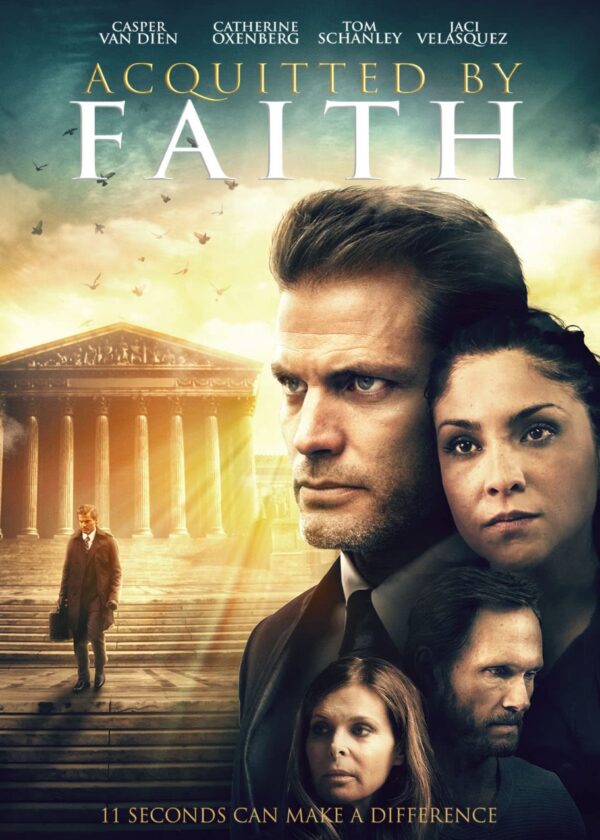 Attorney Benjamin Stills [Casper Van Dien] is nearly sentenced to prison and finds faith in God after killing a teenage girl in an accidental car crash because he was texting while driving.

This dramatic story focuses on the hurt and pain of two families, a family whose daughter Sharon, already battling cancer, is hit while riding her bike, and on the man who hit her, Benjamin Stills. Casper Van Dien gives a strong performance as Benjamin Stills, and the rest of the acting is solid too, including that of Monte Markham, who plays Jack Cromer, the owner of the law firm that Benjamin works for.

This gripping story features some strong plot elements, including Benjamin’s boss funneling funds to the Cayman Islands to keep them from his estranged wife, and his boss plans to pin everything on Benjamin. The movie also does a good job in showing the struggles of Sharon’s parents. Her dad was laid off from work before the accident and with medical bills piling up, he is pressured by a real scumbag to sue Benjamin and his family. And Sharon, in a coma, is not expected to survive. Benjamin feels totally responsible, although he is accused of something he didn’t do. He had dropped his cell phone and was reaching for it when the accident occurred, but he was not texting as he is accused of. Will the truth come out?

The personal struggles that families endure, as well as the pain, is carefully examined in this powerful film. And as a local pastor prays for Sharon and turns the family’s attention to God, will they accept God’s help and trust Him? Or will anger get the best of them? And Cromer, the law firm owner, tosses a Bible to his employee, Benjamin. Will Benjamin search for God in all the pain?

Deftly directed by Daniel Lusko, this film keeps the viewers’ attention and features quality cinematography, not to mention a fine musical score. And the Stills are a typical, though likeable, family. Featuring wife, Beth (Catherine Oxenberg), and their two kids, Conner and Lori, the two kids fuss and squabble as you would expect real siblings to do.

The film opens with Benjamin being overworked, and he has had to cancel a few family plans, which has nonplussed his son, Conner-he wasn’t able to make it to one of Conner’s games. His wife, though understanding, is also becoming a bit impatient with her husband’s law firm expectations. But Benjamin hopes to make Partner, so he keeps on working late when asked. And, in another example of typical family fare, Benjamin tells Beth that she looks hot! It is obvious he loves his wife although he has little time for her at the present.

And little Lori, draws a map for her parents so if they get to take a trip they have planned on, they won’t get lost! Ironically, Lori and Sharon, the girl who is hit by her dad’s vehicle, are good friends.

In a poignant scene, Sharon’s parents are in their van, and they are stressed by the dad losing his job. The dad tries to shirk it off. “So, who wants Chick Fil A?” he asks. In another realistic domestic scene, Conner and his mother, Beth, tease each other. “You grow up!” YOU grow up!” But they smile.

To add to his stress, Benjamin lets his supervisor know that he’s aware the supervisor has been embezzling. And his supervisor gets the idea to pin it on Benjaimin. Fortunately for Benjamin, the good Lord has his back and the owner, Cromer, sees potential in Benjamin, including spiritual potential.

In one scene, Conner is asked to say grace, and he replies, “Grace!” But his sister picks up the slack and prays a nice prayer. And when Benjamin is briefly placed in jail for the accident involving hitting Sharon, a prisoner is impressed with his shoes, and asks where he got them. Fortunately, Benjamin is soon sprung. He still faces being charged with vehicular manslaughter.

And Cromer’s guidance continues to bring light to Benjamin’s life. He reassures him the firm always takes care of their own, and he suggests Benjamin pray, and that he’ll get through this difficult time.

There are a lot of things to like about this movie. Although it shows some blood on Sharon after the accident, and the drinking and embezzling of Benjamin’s boss, it makes clear that the Lord is the answer to seeing us through difficult times, and Sharon’s family will need it when the doctor suggests they pull the plug, because Sharon has no brain activity. But people continue to pray. Will it result in a miracle? And even the bad guy, who is pressuring Sharon’s family to sue the Stills’ family, quotes 1 Timothy 6:10, that the love of money is the root of all evil. And the film does a nice job in showing that giving attention to a cell phone while driving is not a good idea.

This film has procured our Dove seal for Ages 12+.

Here is a movie that does a great job in showing that no matter what we face in life, if we trust the Lord no weapon formed against us shall prosper.

People are encouraged to pray; a Bible is given to a man; scripture is quoted; a pastor helps a family during a severe trial of their faith.

A husband and wife work problems out together; a pastor encourages a family to not lose hope and to keep faith; the owner of a company encourages a man to pray who is facing vehicular manslaughter charges.

A man is estranged from his wife, and apparently having an affair. A man gives an innuendo when he says his wife is “hot.”

A man strikes a girl on the bike as he’s driving, and we see blood on her face following the accident.

A man is seen with drinks in a few scenes.

Cleavage in one scene.

A man pressures a family to sue another family; tension between characters; a man is embezzling from his company.