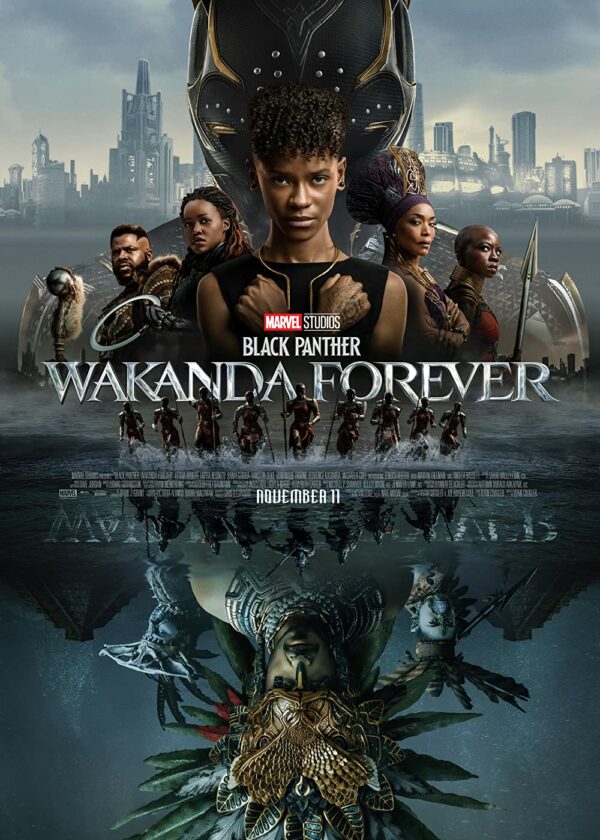 A year after King T’Challa’s death from a disease, Queen Ramonda and Wakanda are being pressured by the world to share vibranium. Some countries have even tried to take the metal by force, and Wakanda is without its protector, the Black Panther. Shuri, T’Challa’s sister, and General Okoye investigate a young science student’s invention. Along the way, Ramonda and Shuri discover that there is a secret underwater nation that also uses vibranium. Namor is the leader of that strong warrior people, and he is a mutant who is strong and can fly. Namor blames Wakanda for the world searching for vibranium and exposing his secret kingdom. This leads to conflict between Wakanda and Talokan, Namor’s nation, and escalates into battles and war.

In this crisis, Wakanda needs its protector once again. The Black Panther.

Black Panther: Wakanda Forever is the sequel to the first movie, Black Panther, and we see all the characters back again for this new installment. The actor who played T’Challa, Chadwick Boseman, passed away tragically, so the sequel begins with an explanation of King T’Challa’s death. This leaves Wakanda without a Black Panther, and since the world now knows about Wakanda and vibranium, nations pressure Wakanda to share their resources and some nations try and take the vibranium by force. At the same time, a secret underwater nation, Talokan, and its god-like leader, Namor, are discovered, and Namor blames T’Challa and Wakanda for exposing them. Namor threatens Wakanda in his goal to destroy the surface world to protect his people, at least in his mind.

Shuri, T’Challa’s sister, is the main character of the sequel, although each character has their own storylines. Ramonda (Angela Bassett) is now queen and takes on the role of political leadership after her son dies. Riri Williams is a young and brilliant college student, which introduces us to the superhero IronHeart from the comic books, the next generation of Iron Man. Namor is a classic character from Marvel Comics as a hero/villain. Fans of the first Black Panther will love this movie, and it is filled with great visuals and character exploration around grief. They do a proper job honoring Chadwick Boseman in a couple ways.

There is little in the way of nudity or sex, especially since there isn’t a romantic arc to the story at all. The costuming is African and native type dress, so we have bare chested men and bathing-suit type dress. There is fighting with water bombs and guns and spears, running people through at times, and there is a decent amount of killing, although not particularly graphic. There’s a slight inference of a lesbian relationship later in the film that might be a concern for parents, and the “heart shaped herb” from the first movie makes a reappearance, creating a drink that causes hallucinations.

Since the actor Boseman and his character, King T’Challa, have both passed, the film focuses on different aspects of grief. Different characters handle it in different ways, whether to take on new roles to protect the people (Queen Ramonda) or to hide in their work (Princess Shuri) or to move to another country to do charity work (Nakia). With Namor’s emergence as an antagonist, and more deaths of Wakandans, Shuri must deal with how her grief and anger could justify revenge and violence. To honor her brother and others that have passed on, she must learn to grieve in a healthy way and fight for peace, not revenge.

For this movie, we can talk to our kids about death and grief. Have they known someone who has died? What is the best way to grieve people we love and miss? Perhaps they haven’t had the personal experience with the death of a loved one, but there are other types of grief – moving away from a school, losing a friend, having to start over in a new area, divorce of parents, etc. How can we be honest about our feelings of grief and yet not allow those feelings to justify bad choices? How can God and prayer help? How can we help one another through grief? This receives the Dove Seal of Approval for 18+

Black Panther: Wakanda Forever is an epic superhero film of wonders, action, and huge battles, all with an important theme of how to deal with grief and conflict in a healthy way.

Healthy explorations of how to deal with grief, to remember and honor those that have passed on and not use our grief to justify negative or destructive choices.

a couple instances of sh*t and one bullsh*t