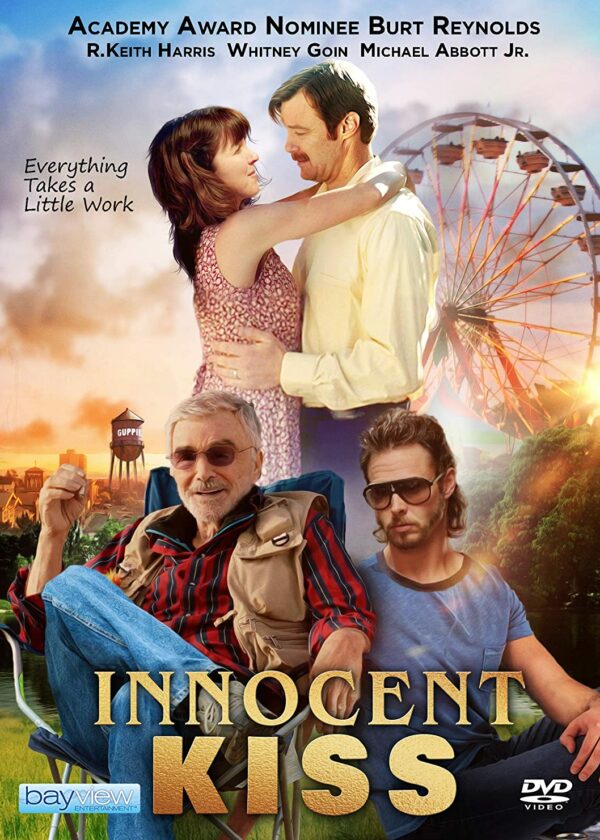 An Innocent Kiss, formerly titled Elbow Grease, is a sincere look into the humor and craziness that is the everyday life of the Barnes family as they come to terms with each other. Billy and Ellie’s marriage may be on the rocks, but they don’t know chaos until Billy’s wayward brother arrives and spreads it not only through the family but to the neighbors and the entire town of Guppie, South Carolina, as it prepares for its annual festival.

An Innocent Kiss engages us quickly and keeps us entertained with fine acting, fleshed out writing and situational comedy. The mom of the Barnes family, energetic and charismatic Ellie Barnes (Whitney Goin), is central to many sub-stories of the film, and like this collage of relationships, Ms. Goin skillfully breathes layers of Southern life into An Innocent Kiss.

However her husband, Billy Barnes (R. Keith Harris) exudes frustration at every turn. Yankin’ the lawn mower, slammin’ doors, punchin’ thangs. We find out pretty soon this displaced aggression is generated by Ellie’s cold shoulder, or two. His small exterminator business absorbs most of his family time and makes for a very tight household budget. Just when life can’t seem any more chaotic (also raising up four kiddos), Billy’s redneck, rude and socially unacceptable brother, Randy (Michael Abbott, Jr.), drops in to stay a while. This lands both him and Billy, for an undetermined number of nights, on the comfort-free, cramped couch. Interestingly, after a jolting moment, it is Randy’s character who begins to show maturing, growth, and consideration for others.

Then we’ve got good natured Gordon (Walter Duckworth), the Barnes’ next-door neighbor. Somehow, even after the Barnes’ hound dog turns his trashcan into a crime scene, after their 16-yr-old boy Henry (Michael Provost) runs over his mailbox, after Randy mistakes his home for Billy’s and is roughed up by small-town police, Gordon doesn’t hold a grudge, just a list of things for the Barnes to fix. He’s no dummy, but he is a sucker for Ellie’s sassy smile, and that list just keeps building.

An Innocent Kiss is a cluster of orbiting relationships, some parabolic at times, extending dangerously away from an in-a-perfect-world center. Here lives flirtatious relationships, wife/husband relationships, father/son, neighbor, grandparent, mother/child, uncle/ nephew relationships. And a couple created by an innocent kiss.

This film is a well-written slice of Southern life. So naturally snafus arise, like drunk-unc leaving the computer on a girly site in Henry’s room. Ellie’s fateful timing is deadly as she scurries around tidying, accidentally jostling the screen of iniquity, and sending poor, innocent Henry into a mortified, aphasic spiral. The next scene involves a deluge of sexual innuendos as Billy encourages Henry in finishing a clay cup for Ellie’s birthday. Of course she’s listening. And suffice it to say, if taken out of context (which it is), each sculpting instruction could be mistaken to describe “self pleasure.” It is clever writing, but certainly male-oriented and laughs at its own joke. “Tacky” would be the appropriate Southern term.

Overall, this pro-family film is full of fine acting, detailed, realistic sets, and intuitive cinematography. Along with the central characters, we are pleasantly surprised to see Burt Reynolds expertly create the role of Grandpa. However, the presence of cussing, scantily clad girls on an internet site, teen beer drinking, and a scene of sexual innuendo are over the discriminating Dove level, so An Innocent Kiss doesn’t receive a Dove approval.

Full of sub-stories and back stories, An Innocent Kiss brings us a 90’s slice of Southern life, sporting some hilarious moments, but remains a little too ripe for Dove families to present to their kids.

Characters seek healthy relationships. Family is most important. However there is one relationship which may imply but not confirm an adulterous affair

Kiss with circumstances and immediate shame and consequences.

Police roughing up a man, man punching other man in the face, wrestling match.

Characters drunk on beer, drinking by adults and underage teen; lots of beer and a little wine