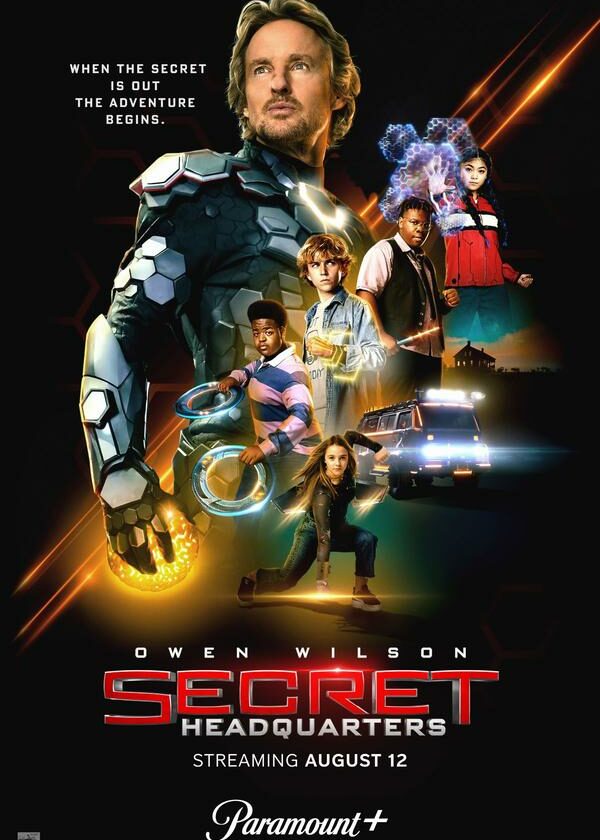 While hanging out after school, Charlie and his friends discover the headquarters of the world’s most powerful superhero hidden beneath his home. When villains attack, they must team up to defend the headquarters and save the world.

Home Alone meets Iron Man in the new family adventure Secret Headquarters, starring Owen Wilson. Charlie, a big fan of the world’s most powerful superhero, The Guard, faces self-confidence problems common to middle schoolers, such as low confidence in sports and anxiety in making new friends. Being ditched once again by his frequently absent father (Wilson), Charlie and his buddies stumble upon The Guard’s headquarters. This triggers the superhero’s enemy’s forces to descend, placing the young group as the only defense against his plans for world domination.

Secret Headquarters is unapologetically a family film, and thankfully, it truly is, forgoing double entendres and awkward profanity found in many similar releases. Here, it’s mostly of the low PG variety, and the closest romantic involvement includes two refreshingly innocent characters determined to wait for many years for their first kiss. In addition to the action and cool shots, there’s a solid message of parenting and the bond between fathers and sons. In choosing to live the life of a superhero, Charlie’s father realizes his frequent absences have jeopardized his relationship with his son.

Is The Guard right for putting the world as priority over his son? Should Charlie be understanding when and if he learns the truth about where his father disappears to? Those are a few questions that could arise as families watch together. Even though the film doesn’t mention faith, the Bible verse Mark 8:36 might come to mind; “And what do you benefit if you gain the whole world but lose your own soul?” Beyond being gone saving the world, it’s clear that Charlie’s father truly loves him, and vice versa.

The fighting is mostly light and comical, making the film a more sanitized superhero film than the ones appealing to adults. There are a few shootings, threats to kill the children, double-crosses, and even a moment referred to as torture. None would push the ratings envelope past PG but is something to consider when viewing with younger kids. Because of those brief moments of lethal violence, the movie should be recommended for children 12 and older.

Children will love the visuals and concept behind Secret Headquarters, featuring otherworldly gadgets, cool superhero suits, and non-stop action, and adults will appreciate the strong thread of family bonds, and friendship.

A strong message about fatherhood and placing priority on family.

Charlie’s dad’s only flaw is that he’s busy saving the world and that gets in the way of being a good dad. So, he’s a pretty upstanding person.

Frequent talks of finding boyfriends and girlfriends, and two characters discuss their first kiss, before saying they’ll wait until marriage.

Mostly science fiction-style laser and anti-gravity weapons but the villains use guns and do shoot some of their cohorts.