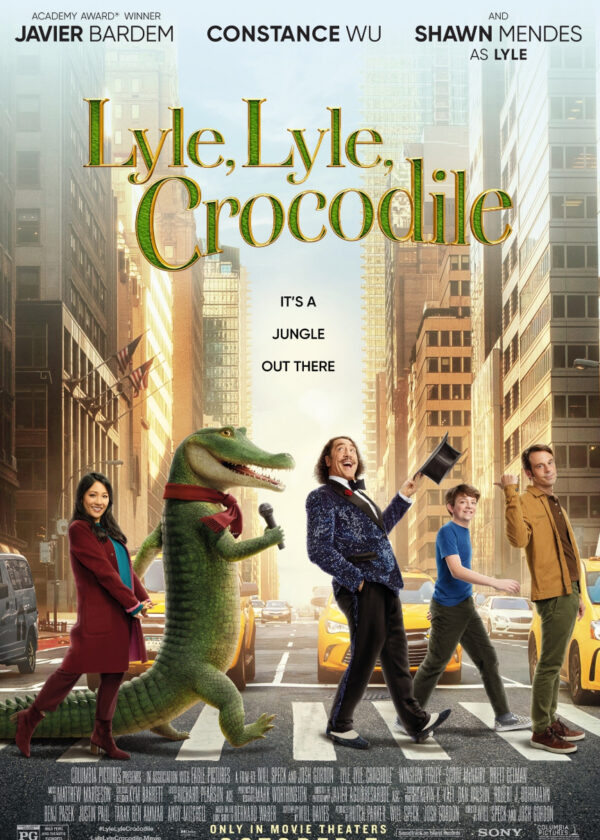 A singing reptile helps a family rediscover its joy in the live-action family musical Lyle, Lyle, Crocodile. Based on the popular children’s book by Bernard Waber, the film follows the life of the title character who is discovered by an eccentric magician because of his love of music. Abandoned in a home for months, Lyle hides away until he’s discovered by Josh, the only son of a young couple who’ve relocated to the city. The two’s growing friendship helps both find a place in the world and slowly, the rest of the family joins in the fun.

The six-foot crocodile fitting into the world provides its share of both comedy and drama, especially with a neighbor, Mr. Grumps, in the basement who’s set on evicting the family over any minor disturbance. In the meantime, Lyle, who doesn’t speak, expresses himself in contemporary pop songs from Benj Pasek and Justin Paul, the team behind “The Greatest Showman” hits. It also helps that popular singer Shawn Mendes provides Lyle’s skilled vocals. Breaking into song on the rooftops of Manhattan singing anthems such as “Top of the World” are visual and audible spectacles that viewers of all ages will enjoy.

Although the Primm family seems like a happy, well-adjusted, drama-free family in the beginning of the film, it’s clear that when Lyle is thrown into the mix, they start to really enjoy life again. Mrs. Primm, a former chef, has walked away from her calling trying to be a good example to her stepson Josh, but doesn’t realize that because of it, she lost her passion. When her life is interrupted by the giant crocodile, he sings to her to “Rip Up the Recipe,” that the world is more exciting when spontaneity is embraced. Similarly, like a giant life coach, Lyle forces Mr. Primm, an overworked math department chair, to let his younger, happier self rise to the surface once again.

Lyle, Lyle, Crocodile is mostly a lot of fun but it also has a message of fully living life and joy that can’t be ignored.

One of the most entertaining and unforgettable family-friendly releases of 2022.

Although not a faith film, the message of prioritizing joy and a passion for life is something worth celebrating.

The family members love each other and are not disrespectful at all to each other. Lyle’s former owner who abandoned him returns and the family embraces him, even after he makes another mistake.

The husband and wife are shown embracing in their wedding videos and photos, and they kiss. A friendship between Josh and a girl at school seems it could head toward a crush, but it’s not fully developed.

Some wrestling moves, both in playing around and in conflict.