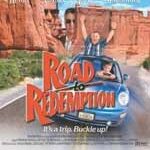 This comic road adventure begins as Amanda Tucker (Julie Condra) and her boyfriend, Alan Fischer (Jay Underwood), find themselves in trouble with an unsavory employer. Needing money, the couple has appropriated $250,000 from her Mob boss’s safe, only to lose the loot at the racetrack. In desperation Amanda turns to her wealthy grandfather, whom she hasn’t seen since childhood. She informs him of her financial woes, neglecting to mention that she’s being hunted by wise guys. The estranged grandfather (Pat Hingle) will help Amanda on one condition – that she take him fishing in Redemption, Montana.

The road trip unites the girl with her grandfather as they elude less-than-efficient gangsters. As Grandpa and granddaughter warm to each other, Gramps warns Amanda of the need for a spiritual relationship with God through Christ. As danger comes closer, she senses that he is at peace despite a life-threatening heart problem. Suddenly aware that life is fleeting, Amanda realizes that she is not ready to face her Creator.

It never ceases to amaze me how World Wide Pictures can consistently come up with involving, insightful storylines. Like TVs Hallmark Hall of Fame, World Wide’s movies over the past several years have uplifted the spirit without sacrificing plot or character development. And now the Billy Graham organization has had the courage to make humor a focal point to one of its stories. While recent dramatic scripts from that studio have moved me, notably “A Vow to Cherish” and “Something to Sing About,” the script of “Road to Redemption” not only tugged at my heartstrings, but it also made me laugh.

By using quirky hoodlums who behave more like Laurel and Hardy, wild car chases, and a buffoonish boyfriend who suffers the comic consequences of his actions, viewers are subject to many downright funny moments. I think World Wide’s executives have discovered that there is no greater way to get the attention of an audience than by injecting humor into their parables. If skeptical family members, friends or co-workers have hesitated in the past to view a “religious” film, this is the one for them. Although it never forsakes the gospel message, this funny escapade relates a story of healing relationships and self-discovery while thoroughly entertaining viewers.

That’s not to say that “Road to Redemption” has no bumps in the road. World Wide Pictures is new to comedy. And although Robert Vernon has written an effective and witty script, Robert Vernon the director has not completely trusted his script’s humor. He’s not yet confident enough to rein in his younger cast members when they fall into slip-on-the-banana-peel mugging. When doing comedy, you need to know when to make a face and when to let the written word do a lion’s share of the work. This the younger cast members will learn in time. And this the director must visualize if he is to subdue a TV sitcom mentality.

Fortunately, character actor Pat Hingle (“Splendor in the Grass,” “The Ugly American,” “Batman”) comes to his costars’ rescue. This old pro knows his way around both a comic moment and a sincere spiritual exchange. The veteran’s sensitivity, coupled with several well-thought-out-comic gags, plus a believable presentation of the gospel message, help make for an involving movie experience.

World Wide Pictures has polished their ability to incorporate the Way, the Truth and the Life into perceptive and believable drama. With “Road to Redemption,” we are seeing that studio’s brave foray into the comedy adventure genre.

Sex: None
Language: None
Violence: Mild comic violence. Much like a Road Runner cartoon, the bad guys are the ones on the receiving end of the violence, which includes car crashes, battles with a swarm of angry bees, and coming face-to-face with a grizzly bear.
Drugs: None
Nudity: None
Other: None