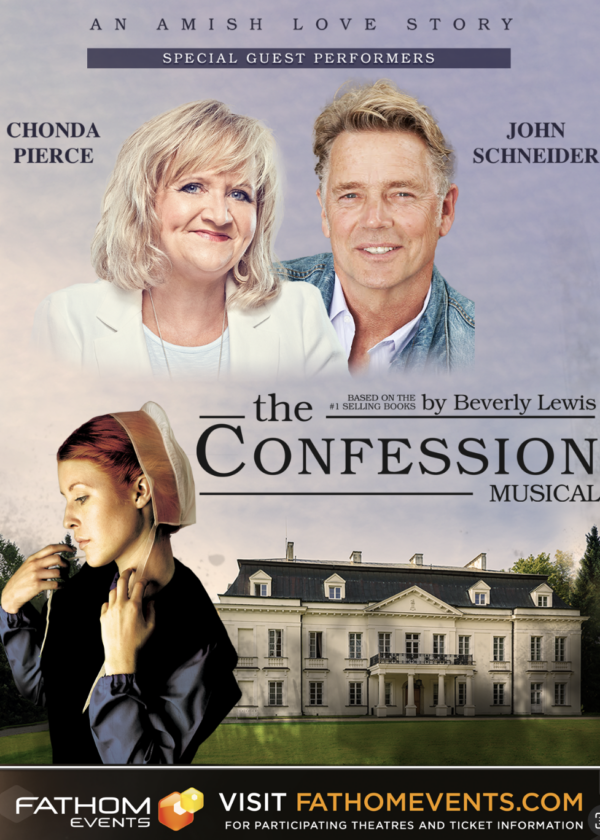 The Confession, a musical adaptation of the book by Beverly Lewis, explores the topic of secrets and lies and the destructive nature they can have on one’s life. Katie and Daniel are two young lovers wanting to be married. But when the community believes Daniel has been in a boating accident, it rips the two apart. Katie also discovers she has been adopted and she goes in search of her biological mother. This musical is a story of rebellion, lies, and the redemptive work God can do in any situation. It also explores the positive elements of adoption and reunification of both adoptive and biological families.

Katie Lapp and Daniel Fischer fell in love. Daniel loves to make music and play the guitar, much to the Amish community’s disappointment. Katie hopes to be married to him, until a tragic drowning takes Daniel from Katie. Two years later, she still misses Daniel and goes up to the attic to play his guitar. There, she discovers a baby dress with a note addressed to Catherine Mayfield. Intrigued, Katie asks her mom who confesses that Katie, originally named Catherine Mayfield, was adopted and her name was changed to Katie Lapp. She goes on a search to find her mother, Laura Mayfield, even though the bishop forbids it. Because of her disobedience, Katie is shunned from the community. Meanwhile, Katie’s real mother is looking for her so she can let her know she is sick and when she dies, she inherits all her estate. But Katie’s dad hires an actress to play Laura’s real daughter so when she dies, he will have a cut of her fortune. When Katie leaves the community to find her mother, Daniel resurfaces, saying he lied to the community so he could leave the plain life, go to school, and play music.

Alison, the actress playing Catherine, upon hearing about Jesus, repents and chooses to no longer play the role of Laura’s daughter. Katie, who has gone to work as a maid for a rich family, quickly realizes she is working for her real mother. Katie and her biological mother are reunited before Laura passes away. Daniel, upon talking to Katie’s best friend, finds out where she is and goes to find her and the two are also reunited. They are married, the shunning from the community is lifted, and Katie and Daniel Fisher live back in the Amish community.

Based on the book by Beverly Lewis called The Confession, this book explores the concept of adoption and identity as well as the dangers of keeping sinful secrets and what a rebellious spirit can have on a person’s life. When a woman realizes she is adopted, she goes in search of her mother, despite risking her reputation within her community. Despite characters’ rebellion and warning from their religious authorities, they discover what family means as well as true love.

This musical adaptation of the book creates a great opportunity for families to discuss concepts such as lying, rebellion, secrets, and other rebellious acts that kids may think are OK. It shows the destructive nature of these elements and what repentance from these behaviors looks like.

It also has an overarching theme of “following your heart,” which may sound good but is not in alignment with Jeremiah 17:9 which says, “the heart is deceitful above all things and desperately wicked, who can know it?” This visual demonstration will help viewers to see that these acts can have a destructive impact on people’s lives, as well as see God’s redemption over any situation. Despite the exploration of these sins, the play has no foul language, no use of alcohol or drugs and only brief sexual content.

This musical can be used as a great discussion starter to explore what it means to follow God with all your heart. The musical overall does align with a biblical, Christian worldview, despite the characters’ flaws. The Confession is a musical adaptation that beautifully depicts redemption and hope in ways viewers will relate to. This is a film that both parents and teens as well as believers and unbelievers alike will enjoy together. Believers may want to invite unbelievers to watch the musical together and then discuss the elements explored as well as extend an invitation for salvation if desired. Because of these more mature elements, Dove gives The Confession the seal of approval for ages 12 and up.

As families watch this musical, they will want answer questions such as:

Dove Take – Teens will enjoy the dramatic presentation of Beverly Lewis’s book. Parents will like the stellar performances and engaging storytelling used to demonstrate the destruction of sin patterns as well as redemption and hope.

Overt message about salvation; Christian implications of redemption/mercy

Excellent examples of “whole character” integrity or arc of significant positive change (one character repents of her lying because of her new salvation in Jesus); one woman risks a shunning to tell her friend the truth about the friend’s boyfriend

On screen acts of romance – one scene of an engaged couple kissing; one reference to a woman’s butt being her best asset

Mild non-graphic violence comic violence; one woman pushes her bag in front of a friend, warning him not to come closer to her; one woman slaps her husband’s arm as a motion to stay silent