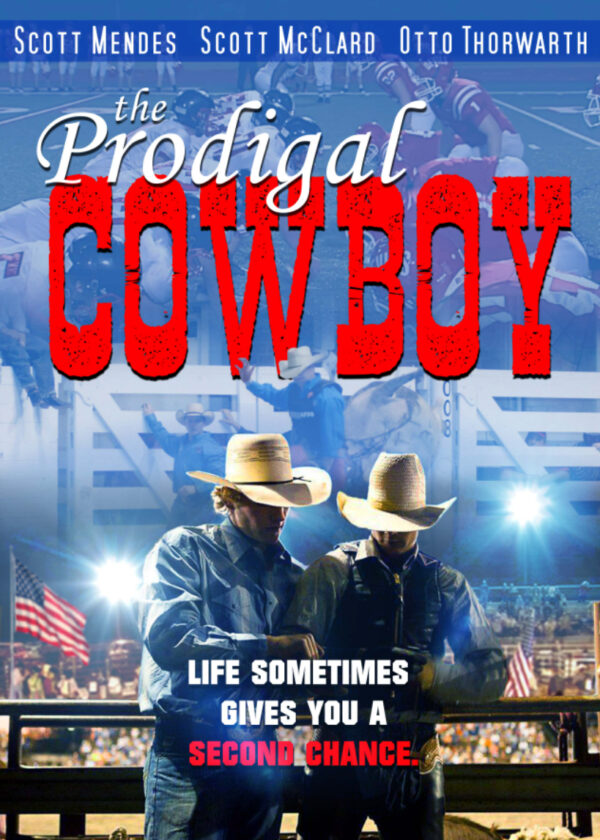 Two brothers — Nick, an athletic high school football star, and Mark, a rising name on the rodeo circuit — have always been rivals. But, after a family tragedy, the competition heats up for their father’s attention. Otto Thorwarth teams up with world champion bull-rider Scott Mendes to deliver this Western-style, modern-day story of the prodigal son.

The biblical story of the prodigal son is familiar to most of us.  Once in a while, we need to be reminded of this timeless story of accountability.  The Prodigal Cowboy takes on this enduring account, donning cowboy garb and Arkansas culture.  The film, first, shares bits of the history of two brothers and the coloring of their characters. Mark McClard (played by Scott McClard), popular and talented, gives his life to Christ as a boy.  Contrariwise, Nick McClard (Scott Mendes), always envious of his brother Mark, struggles to make his “place in the bull-riding world” winding up bitter and removed from his family.

We follow Mark growing up with strong family ties, suppressing his sadness that one has broken.  Nick, perceived by both brothers to be their father’s (Jimmy Forsythe) favorite, overlooks his father’s favoritism, instead jealously focusing on the many talents and accolades Mark receives. Each brother harbors an injurious resentment that has turned to dust and has been swept under the rug of no return.  And without divine help, that rug cannot come clean.

Fortunately, there is persistent prayer, and we are reminded there is nothing impossible for Jesus Christ.  Over the years, the boys’ grandparents (Kevin Andrews and Linda Robinson) have been unwavering and patient, diligently seeking God’s intervention in their grandsons’ lives.  More diligent than Nick’s bull-riding career, more diligent than Mark’s long hours building their family BBQ restaurant.  All lie dormant, until their father dies.

A nice addition to The Prodigal Cowboy is the comic relief provided by Tank (Otto Thorwarth), Nick’s rodeo traveling partner.  For example, the film has Tank and Nick walking into a bar, where Tank announces to the “pretty ladies” that the man of their dreams has just walked through the door!  Growing up in the same town, Tank is probably Nick’s only friend.  Among others, Tank’s character and his conversion to Christ legitimize the film as a strong Gospel vehicle, undergirded by rich Southern and rodeo imageries.

The Prodigal Cowboy gives us a realistic painting of soul searching, the torture of bitterness, the fight to forgive and the burden relieved once real forgiveness lives. This is a family documentary; the few drinking and bar scenes assist in showing us “before/after” pictures of both Nick’s and Tank’s souls.  When Tank gives his life to Christ the next Sunday, we can see a marked difference in him. And, Rebecca, Mark’s wife (Kelli Hernandez) does an excellent job reeling Mark in from this ocean of anger, which causes him to think about what God commands regarding forgiveness.  She speaks well, straight from the Word and it affects Mark’s heart.

Production-wise, a few volume issues exist with background noise and there are a couple of editing glitches, as well as actor placement weaknesses.  We see uneven acting in some scenes, but the point of the film overrides. The score, mostly C&W, lends credibility.  Both Mark’s and Nick’s characters wrangle emotionally tough scenes well. One scene involves throwing a beer bottle and drunk staggering, thus isn’t for little ones.  Overall, the redemptive value of the Gospel is strongly honored and delivered by committed actors and director.  Dove awards The Prodigal Cowboy the 12+year old Seal of Approval.

This family drama, The Prodigal Cowboy, is a victorious story of redemption, salvation and healing, in a western setting, which older children and adults will appreciate.

Full sharing of the Gospel. Main character gives his life to Christ.

Husband and wife flirt, then run into the bedroom.

Beer bottle is thrown, shattering a TV. Characters yell at each other.

Adults drinking beer; one particular episode details painful consequences the next morning and does not portray drinking in a favorable light.