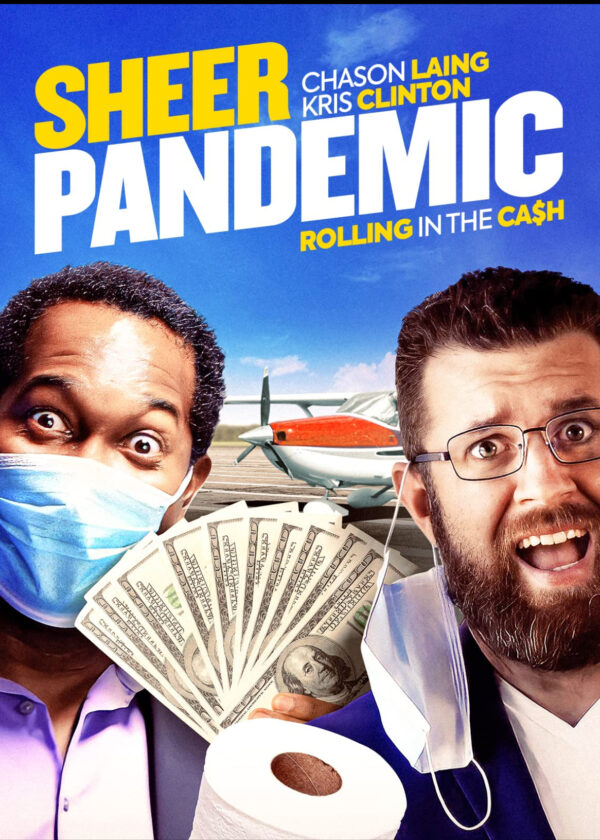 Two unemployed friends become entangled with a gangster once the money starts rolling in after selling black-market toilet paper during a pandemic.

Sheer Pandemic approaches the economic and social disruption of a pandemic upon the world by focusing on the lives of two friends and family men from the suburbs, Punch (Kris Clinton) and Jack (Chason Laing), who are feeling the consequences of a lockdown. Comedy abounds when Punch and Jack decide to supplement their lost income by selling toilet paper on the black market for Jack’s Uncle Bernie (Grant Davis), who is also an arms dealer.

These two partners are constantly confronted with a variety of laughable personalities during their business dealings, such as the big pharma conspiracy theorist, who holds them up at gunpoint; the wacky neighbor, who makes his own masks with holes in them, and sits outside all day long in his robe; the various personalities on Zoom; and people in utter fear, who refuse to remove masks and gloves at any time such as Punch himself, who Jack is constantly making fun of him, and confronting for being in constant fear.

As these two bumbling pseudo-criminals, who are concerned that gauging the public for basic needs will land them in trouble, are running into danger at every turn as they go into business with the Russians, and get help-up by gangsters, who demand they sell them guns and not toilet paper and hand sanitizer. While one character is shot on screen and even accused of kidnapping, these escapades occur in a light-hearted, comical fashion that leads to an authentic message about how to best live one’s life.

Sheer Pandemic is a light-hearted comedy about serious circumstances that advances the notion of choosing faith over fear as the best philosophy of life.

Discussion about not choosing fear as a way of approaching life’s difficulties, but instead faith that all things will work out as they should.

Main characters engage in black market activity, but refuse to commit actual crimes, and work to protect a young girl who is kidnapped; main characters portrayed as loving and faithful family men.

Guns are wielded throughout, pointed directly at people, and one man is shot in the torso.