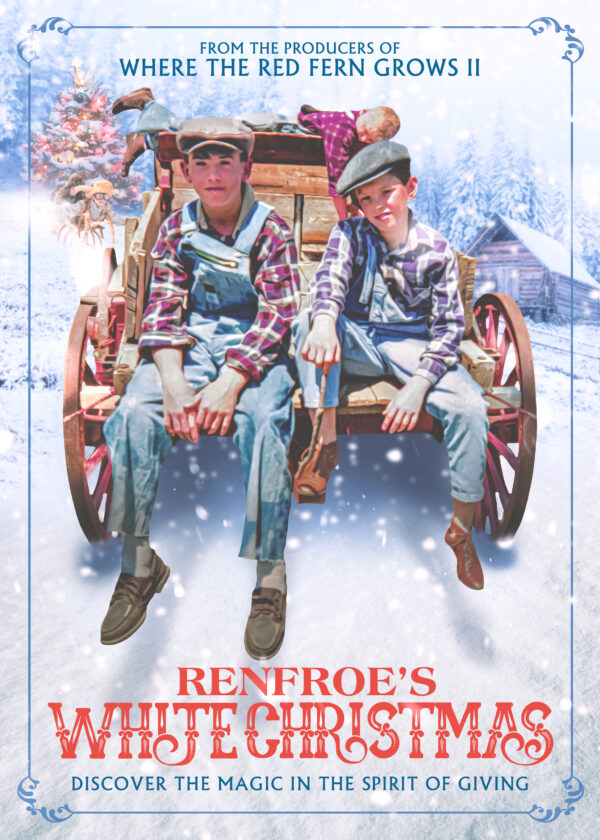 A little boy growing up on a farm in rural Louisiana in the 1930s wishes for a White Christmas and must do a selfless act in the spirit of giving in order to get his wish.

Simpler times — this movie recreates simpler times during the depression years. The story takes place in Louisiana, during the time that Franklin D. Roosevelt was president. A young boy named Renfroe Madison (Nicholas Todd) lives with his parents and brother D.J. (Daniel Glover) and sister Clara Mae (Baily Briggs), and his singular most important wish is for it to snow on Christmas. We learn it hasn’t snowed for at least 30 years in the area.

The simpler times that the movie conveys features the kids running and playing outdoors, some in flannel shirts, and (no cell phones then!), looking forward to pie for dessert with their dinner, going to school, and being involved in the church Christmas program. And they hold on to Christmas wishes, with Renfroe still waiting on that Christmas snow.

Directed by Charles B. Pierce and based on an original story by Robert Burch, and a screenplay written by Catherine Glover, the movie may seem as if it moves at a slower pace compared to many films today, but the nuances are terrific, such as when we see D.J.’s delight in getting a yo-yo for Christmas, and Renfroe receiving a beautiful watch. An older Renfroe narrates the story, especially at the beginning and the conclusion, and he shares his memories of those simpler times, memories of fishing, making kites out of old newspapers, and he says, “Sometimes my older brother would let me actually try to fly one of them.”

Renfroe continues to dream of snow on Christmas, and when the family gets a new angel for their tree, he nails the old angel on the front of the barn, and notices it seems to look at him wherever he goes. The narrator comments, “I still believe in angels and in miracles.”

The family sits down at meals together and Papa prays over the food.  They talk of the impending winter, and Renfroe comments, “Maybe it will snow.” Renfroe laughs about the previous Christmas play when a boy tripped, and his candle fell into the manger, hitting the straw, and igniting a small fire with lots of smoke. They were thankful a real baby was not in the manger, but a doll! The kids sang “Joy to the World” while the smoke hung over their heads!

The references to the Lord and nativity happen every so often and it’s a nice added positive element to the film. While Clara Mae is milking the cow, she says she can just imagine Jesus’ birth in the stable.

Again, the simpler moments of life are nicely portrayed in the film, as the boys sit on a fence, crawl under it, fall to the ground, and go fishing. In one scene Renfroe uses a long stick to pretend he is a soldier and shoots his rifle. In one scene, with Christmas and snow not far from his mind, Renfroe draws an angel, and his mother says, “It’s not Christmas yet, but it is supposed to get cold.” This seems to be a signal to him that she hopes for snow too.

In one scene, Clara Mae stops from milking the cow to dance with Renfroe as “Silent Night” is played on the old phonograph player. At one point in the film Renfroe complains that it is almost Christmas and “still hot!” One of the nice festive scenes includes Papa getting the Christmas decorations and the kids decorating for the big holiday.

Renfroe wants to keep the angel and D.J. teases him, “Don’t tell me you’re going to start playing with dolls!” And, as kids sometimes tend to do, there is a bully that pulls a girl’s hair and D.J. gets into a fight, with some punches thrown before the teacher breaks it up.

The family is seen Christmas shopping in town, with the Christmas decorations all in place, and as “Jingle Bells” is played we see various people wishing each other “Merry Christmas!” There is a genuine joy. We see the family ride together in the horse-drawn wagon, and we hear President Franklin Delano Roosevelt over the radio say, “The only thing we have to fear-is fear itself.” When Renfroe gives of himself unselfishly, and sacrifices a gift for another boy, it is that night that a miracle occurs. We won’t spoil the ending, but it’s a happy one! This film easily earns our Dove seal for All Ages.

This movie takes you back to a simpler time, with positive character portrayals, and reminds the viewer that Christmas miracles can still occur!

The nativity story is shared and dramatized; Jesus is mentioned a few times; prayer over a meal; Christmas songs.

A boy performs a selfless act, helping another; a family cares for one another and shows this by encouraging one another.

Two boys get into a short lived-fight, with punches thrown, but the teacher quickly breaks it up; a bully pulls a girl’s hair but she is okay.

A bit of teasing by a kid.