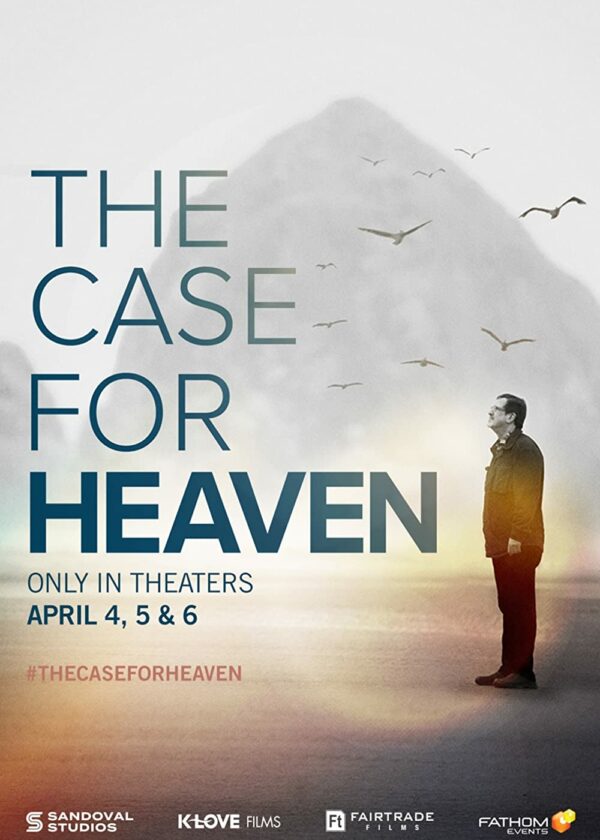 The Case for Heaven

Based on the book by New York Times best-selling author Lee Strobel, The Case for Heaven answers the questions of what awaits us after death, the evidence for Heaven and Hell, and what really happens in Near-Death Experiences. In The Case For Heaven, audiences will be taken on a fascinating journey to find out what happens after we die. Lee Strobel explores the evidence for an afterlife as he addresses mankind’s biggest fear: death. The Case For Heaven was inspired by Strobel’s own brush with death and will challenge, encourage and inspire viewers. The documentary includes interviews with world renowned pastor Francis Chan, best-selling author John Burke, Evangelist Luis Palau, and more. “The pandemic has a lot of people pondering what happens after people close their eyes for the last time in this world,” said Strobel. “This film provides compelling evidence from both inside and outside the Bible to show that we will, indeed, continue to live on.”

If you’re skeptical about near-death experiences, join the club. Lee Strobel was too.

A legal editor for the Chicago Tribune, Strobel not only didn’t believe in near-death experiences, he didn’t believe in God — right up until the day that he collapsed in his home and awoke in the emergency room, where a doctor wearing a surgical mask told him he was “one step away from a coma and two steps away from dying.”

A case of hyponatremia, or low blood sodium, left him on the verge of eternity and eventually set him on the path that has led him to The Case for Heaven, a book-turned-documentary movie in which Strobel takes on the age-old haunting question: What happens next? What happens when you close your eyes in this world for the last time?

Christians believe Jesus Christ answers that question because He rose from the grave on the third day, just as He said He would. But He went to the Father, ascending to Heaven in front of His disciples 40 days after the Resurrection. Two thousand years later, how can we make The Case for Heaven persuasive and convincing?

Strobel, who first wrote The Case for Christ, is equal to the task. He presents documented cases of NDE — that’s near-death experience, for the uninitiated — from people who were likewise skeptics. John Burke was an engineer whose dying father prompted him to pursue the question and found that it wasn’t as rare a phenomenon as he might’ve expected. One in 25 Americans reports having an NDE, and one in 10 Europeans. Strobel wanted more than statistics.

If all the NDEs were the same, as one of those interviewed posited, we could probably dismiss the phenomenon as an exercise in collusion. But while many are similar, they’re not identical and Strobel uses the differences — like those found in the Bible itself — as subtle evidence that this is a real thing.

He presents the case of Pamela Reynolds, a 35-year-old Atlanta woman who suffered a brain aneurysm and had to be rushed into surgery. Her eyes were taped shut and her ears plugged with earphones blasting 100-decibel sounds. Why doctors would do that while trying to save her life may be a question for a different review, but the more compelling thing is what she was able to report after blood was drained from her brain and her body was cooled to 50 degrees Fahrenheit.

Upon her recovery, she reported she was conscious while her brain was not — details and conversations during the operation that she otherwise had no way to know.

One of the most compelling testimonies is also one of the most unpleasant — that of Howard Storm, the head of the art department at Northern Kentucky University, an atheist who suffered an intestinal rupture on June 1, 1985. He descended into Hell, where he was being torn apart by malevolent beings, and yet heard a voice commanding him to pray — even though he protested that he didn’t know how. Nevertheless, he complied and saw a small, but growing light, reaching toward him. Jesus picked him up and saved him. “I cried into His chest, slobbering all over Him,” Storm recalled. When Storm got well, it was more than an NDE — he became a Christian and now pastors a church in Kentucky.

There’s much more to this compelling documentary that you’ll have to see for yourselves, including snippets from what Strobel says is the last interview of international evangelist Luis Palau’s life. Though the subject matter is probably advanced for children, the content is safe for them to view and as such the movie merits the Dove-approved Seal for All Ages.

For some, Strobel’s documentary will preach to the choir, and for others, we can only hope it helps convince them to become part of the choir.

The documentary minces no words that Jesus rose from the dead, and therefore it should not be surprising that there are those who speak intelligently of a consciousness that death itself cannot kill.