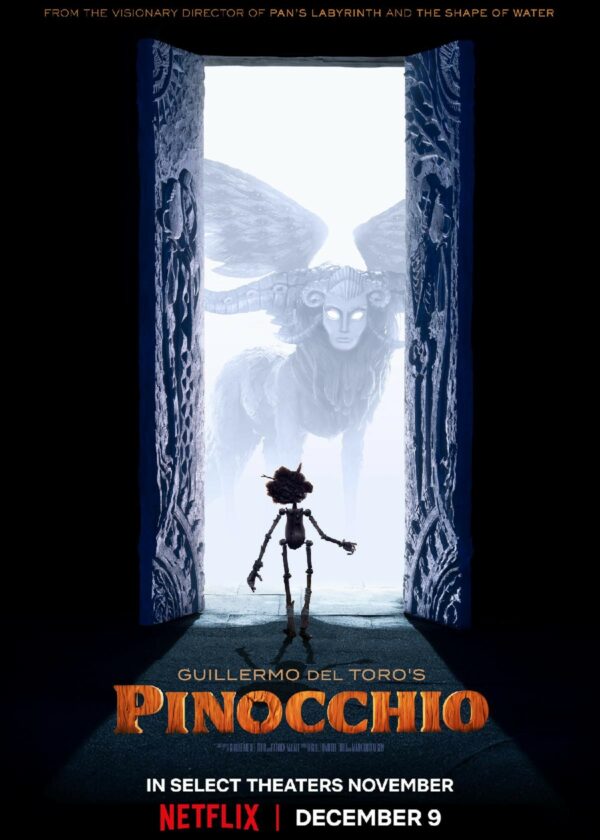 The newest incarnation of the beloved puppet character Pinocchio was filmed through the eye of acclaimed cinematic auteur Guillermo del Toro and told in intricate and mesmerizing stop motion animation. This story, marked in tragedy, begins at the grave of Carlos, the only son of the widower, Geppetto. Distraught by his untimely passing, the carpenter, in a drunken rage, begins building a boy out of wood from a tree that grew by his tombstone. Brought to life by the Wood Sprite and aided by the wise Sebastian J. Cricket, the wooden puppet begins an adventure that often puts him at odds with his small community, driven by Axis allegiances and religious fundamentalism, and a target for a traveling carnival road show. Through it all, Pinocchio learns the meaning of life and love.

There have been many takes on the classic Italian story of Pinocchio, most famously rendered by Disney both in animated and live action. For his interpretation, Guillermo del Toro selects some familiar elements such as a cricket guide and a nose that grows when he lies but then veers into a darker, tragic take on the beloved hero. Geppetto, an eccentric widowed carpenter, is devastated by the untimely death of his only son, Carlos. Through flashbacks, the audience sees the strong, pure bond of love between the two.

While Geppetto works on a large crucifix for the village’s Catholic church, a stray bomb kills Carlos and sends the carpenter into the depths of despair. For years, he withdraws into a drunken, depressed state until one night he cuts down a tree at Carlos’ graveside, one that Sebastian J. Cricket has taken residence in. He angrily crafts the wood into a boy and passes out before the Wood Sprite appears to give the wooden boy life.

Pinocchio’s “birth” sets off an entirely new set of adventures, firstly being judged and feared by his small-town neighbors, then suckered into performing for a traveling circus show. With his assigned “conscience” Sebastian J. Cricket literally living in his heart, the boy chooses to ignore him most of the time, further complicating things for him and his father. Pinocchio dies and is transported to a strange afterworld where a beast-like winged creature named Death reveals he will die many times but always return to the land of the living. Fearing that he is messing up his father’s life and will never live up to the memory of Carlos, Pinocchio leaves home and Geppetto sets out to find him.

The film features Christian imagery such as the face of Christ in the crucifix, the last thing Carlos lays eyes on before his untimely death. When he first appears in church, some of the members are shocked and call him a demon. Pinocchio also innocently wonders why churchgoers worship the Jesus crucifix but don’t like him. “He’s made of wood, too.” However, the actual afterlife is a strange affair, characterized by strange blue bunnies playing poker and the beast-like Death, who bemoans her sister, the Wood Sprite’s, involvement in Pinocchio’s birth.

The horror of war is also explored, as Pinocchio and a human counterpart boy, Candlewick, are drafted into a training camp for the Royal Italian Army. Pinocchio also sings for infamous Italian Prime Minister Benito Mussolini and is shot and killed again by his right-hand man. Later, he is threatened with death at the hands of Candlewick’s father, the Podesta, before the site comes under attack from bombs.

In the beginning, Pinocchio has much to learn about right and wrong, but by the end, he courageously faces dangerous situations in order to save the ones he loves. He shares good advice and concern for Candlewick, a boy who had not been nice to him, and makes some powerful sacrificial choices to ensure the safety of those he loves. He eventually wins over even his fiercest enemies.

Guillermo del Toro’s Pinocchio is a visual masterpiece and probably the most family-friendly offering from this director, most widely known for his gothic and horror releases. However, some of the imagery, darker tones, and scary character designs may give parents of children younger than 12 pause. For those who watch together, they can discuss the process of making the right decisions and how sometimes making the wrong decisions negatively impact those around them.

There are elements of redemption, self-sacrifice, and grace in the film, although they are not directly attributed to the concept of a Christian God.

Pinocchio as a character is a model for children to learn from and this one interpretation is a great example of someone who starts with innocence but ignorance of moral boundaries and learns how to love.

Few mentions of non-profane bywords such as “gosh darn it,” “poop,” and “farts.”

Pinocchio dies in non-graphic ways (off-camera) several times and is brought back. Carlos is killed by a bomb (off-camera). Sebastian J. Cricket gets humorously smashed by doors and other items but is unscathed. Characters are threatened with guns.

Geppetto drowns his sorrows in alcohol and goes into a drunken rage after the loss of his son.