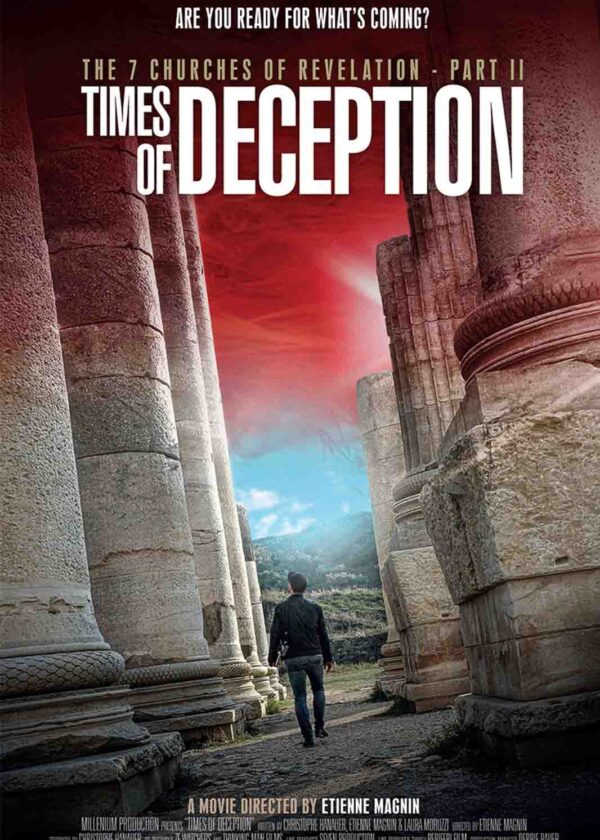 7 Churches of Revelation: Times of Deception

The 7 Churches of Revelation: Times of Deception, the second film in this series, investigates the final four churches: Thyatira, Sardis, Philadelphia and Laodicea.

The 7 Churches of Revelation: Times of Deception picks up where the leadoff batter in this series, Times of Fire, left off. That one examined the first three churches to whom Jesus commissioned letters to be written — Ephesus, Smyrna and Pergamum. This one finishes with the letters to Thyatira, Sardis, Philadelphia and Laodicea.

As with The 7 Churches of Revelation: Times of Fire, investigative filmmaker Christophe Hanauer tours these churches in the province of Asia, which is how the Apostle John began the book of Revelation. As Hanauer visits them — interviewing theologians, pastors and other students of Scripture — he looks for clues that will help him make sense of the letters in a modern-day context. Many others also have sought in these letters to connect the things that Jesus says to and about these churches to the stages His Church has experienced from the time of His resurrection to the time when He will return. In some of these letters, Jesus commends the Church for its faithfulness. In several, however, He delivers rebukes — some more severe than others — and calls for repentance.

Thyatira was rebuked for spiritual prostitution, depicted in a tolerance of a false prophetess named Jezebel. Sardis was rebuked for having a reputation for being alive and a reality for being dead, settling for religious ritual instead of a vibrant relationship through the Holy Spirit. Philadelphia drew no rebuke, earning commendation instead for remaining faithful despite being small and of little strength. Laodicea, however, drew the stiffest rebuke for being fat, happy and self-satisfied, which masked its true, dire condition of being completely the opposite spiritually.

While the names of these cities have changed over the years, the message remains true. Despite some of the hard-to-hear truths, the documentary concludes on a note of hope — that Revelation isn’t about doom and gloom, but about triumph: that Jesus will lead His Church to triumph and make all things new. There is more to come in the series, but the second installment is just as compelling as the first and merits the Dove-approved Seal for All Ages.

Movie examines Revelation 2:18 through the end of the third chapter, covering the churches of Thyatira, Sardis, Philadelphia and Laodicea and echoes Jesus’s message to those four churches, making them applicable to this age, in which the Spirit is still speaking to the Church universal.

The investigative filmmaker remains true to the Spirit of the Scripture and his research uncovers pictures that add color to the written word. He doesn’t seem to come to these venues with a hidden agenda but with a heart geared toward genuinely understanding things that might otherwise remain hidden.