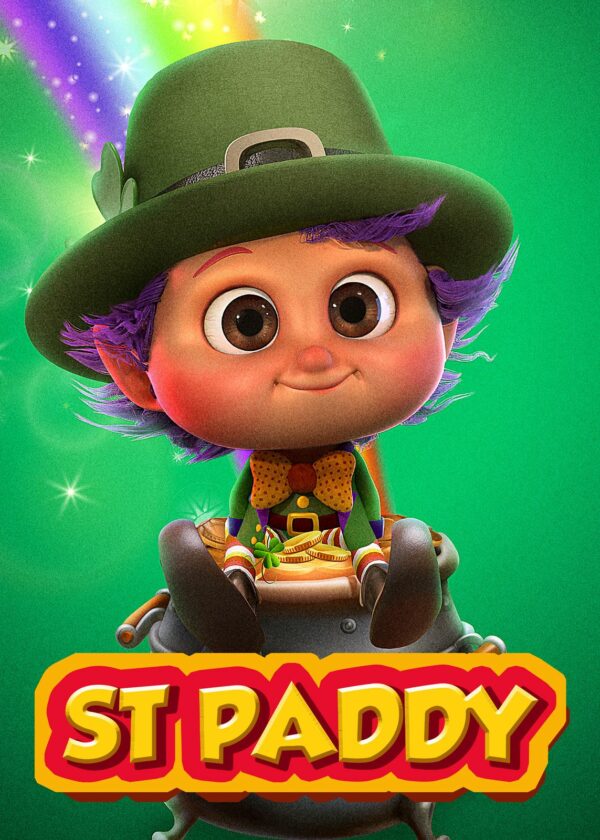 Meet Patrick, the cutest leprechaun you’ll ever know on a mission to bring good luck and grant wishes to the whole world. But Goldie the Golden Goose teaches the little leprechaun that for every wish granted there is a consequence. Now Patrick has a decision to make: will he grant everybody’s wish and shamrock their world?

Begorrah! This delightful, animated movie with a touch of Irish does a terrific job in showing the viewer that happiness can be found in the simple things of life and helping to grant the wishes of others is a true blessing. And that there are consequences in life, based on the decisions that we make.

Paddy the lucky leprechaun and his best friend Cupid take center stage as they set out in their ship, the Purple Arrow, to grant wishes. They first head to the North Pole to visit St. Nick himself, Santa Claus. It will be cold for Cupid, who only wears a leaf, so he stays in the ship to plot courses while Paddy visits the man in the red suit with the white beard. Humorously, Santa says that maybe he will put a pair of pants on his Christmas list for Cupid!

“What’s your wish, Santa?” asks Paddy. “No one’s ever asked me that,” replies Santa, who is used to being on the giving end of wishes. Santa says he wants joy for the world, people to get along, and more love. He wants people to be good to themselves and better to each other. In a comedic moment, Paddy tells Santa to share his thoughts and Paddy says, “Shoot,” or, in other words, “go ahead.” “I mean that figuratively,” adds Paddy. “The last time I told Cupid that I ended up with a bum full of arrows!” Santa suggests Cupid and Paddy continue to travel around and ask what people wish for. Of course, Cupid is simple – he thinks pizza will make everyone happy.

One of their destinations is Wonderland and Cupid says, “They don’t like tardiness there, especially that rabbit fella!” Paddy visits Hatter and Dormouse, and Dormouse hides in Hatter’s hat, who is unaware of it. Hatter thinks Dormouse is his spiritual guide and giving him messages from the other side! Dormouse and Paddy thinks it’s funny.

Paddy really enjoys his time travel trip to 1861 to see President Abe Lincoln. Abe is Paddy’s hero. Abe says he doesn’t care to see the future, but his wish is for people to love and respect one another, despite differences. “We’re all created equal,” says Paddy. Cupid, always funny, asks Paddy if Abe wished for a new hat, a beard trimmer, and a shiny new penny. Paddy admits that Abe’s kind wishes made him teary-eyed.

In another funny scene a character asks Paddy, because of his short size, if he’s a member of the Lollipop Guild! Cheshire the cat has a wish, and it’s for others to be happy and he says that laughter is the best medicine. And Paddy visits the Easter Bunny and thanks him for always being there for him as a good friend. Goldie the goose reminds Paddy that hard work and kindness are two essential qualities in life. Gepetto wishes his family could be with him all the time and shares it’s important to remember your family who isn’t here any longer, by keeping them in your heart and in your memory.

There are wonderful worldviews in this movie, such as you never stop learning and that simple things in life are the best. As Fantastico jokes with Paddy, tacos make him happy! The importance of loved ones is nicely emphasized.

Think About It: There are wonderful themes and discussion points in this movie. For example, family isn’t always easy to get along with, but worth it. And honoring the memory of those who have passed. The necessity of working hard, giving to others, and remembering to laugh are also great discussion points. And the character Dudley wishes people wouldn’t give up so easily when facing problems. This movie has earned our Dove seal for All Ages, as there is very little content in it and nothing to be concerned about.

THE DOVE TAKE: This remarkable film shows the importance of love, family, and friends, and it does so by adding a few chuckles along the way.

Love is mentioned as all important.

Several characters wish the best for others, not themselves; the importance of accepting others, even with differences, is incorporated, and that all people are created equal; Santa wants others to love and appreciate one another.

Cupid is only covered with a leaf but he is as small as a baby.

Dormouse acts like he is Hatter’s spirit guide from “the beyond” but it is done as a joke.